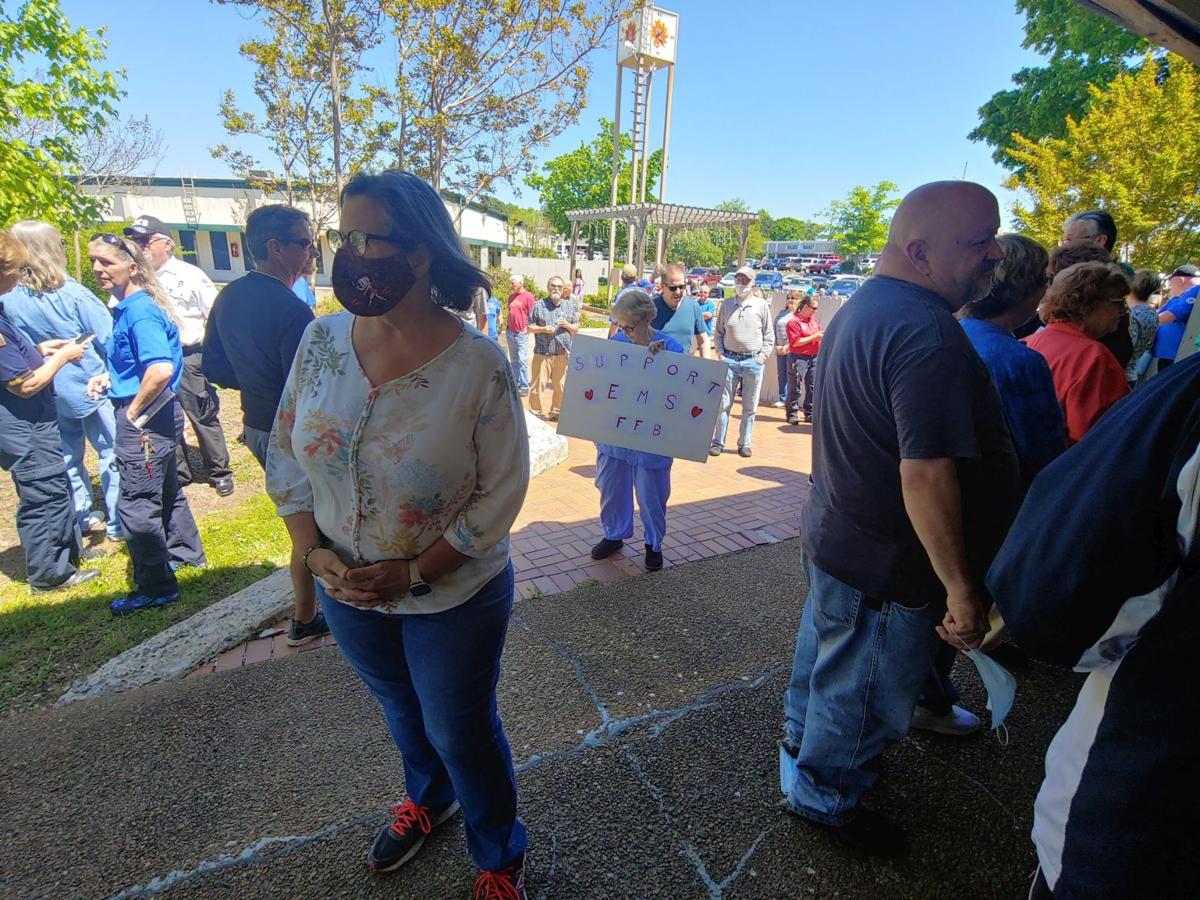 The crowd outside city offices prior to the May 5 meeting. “Support EMS” sign. 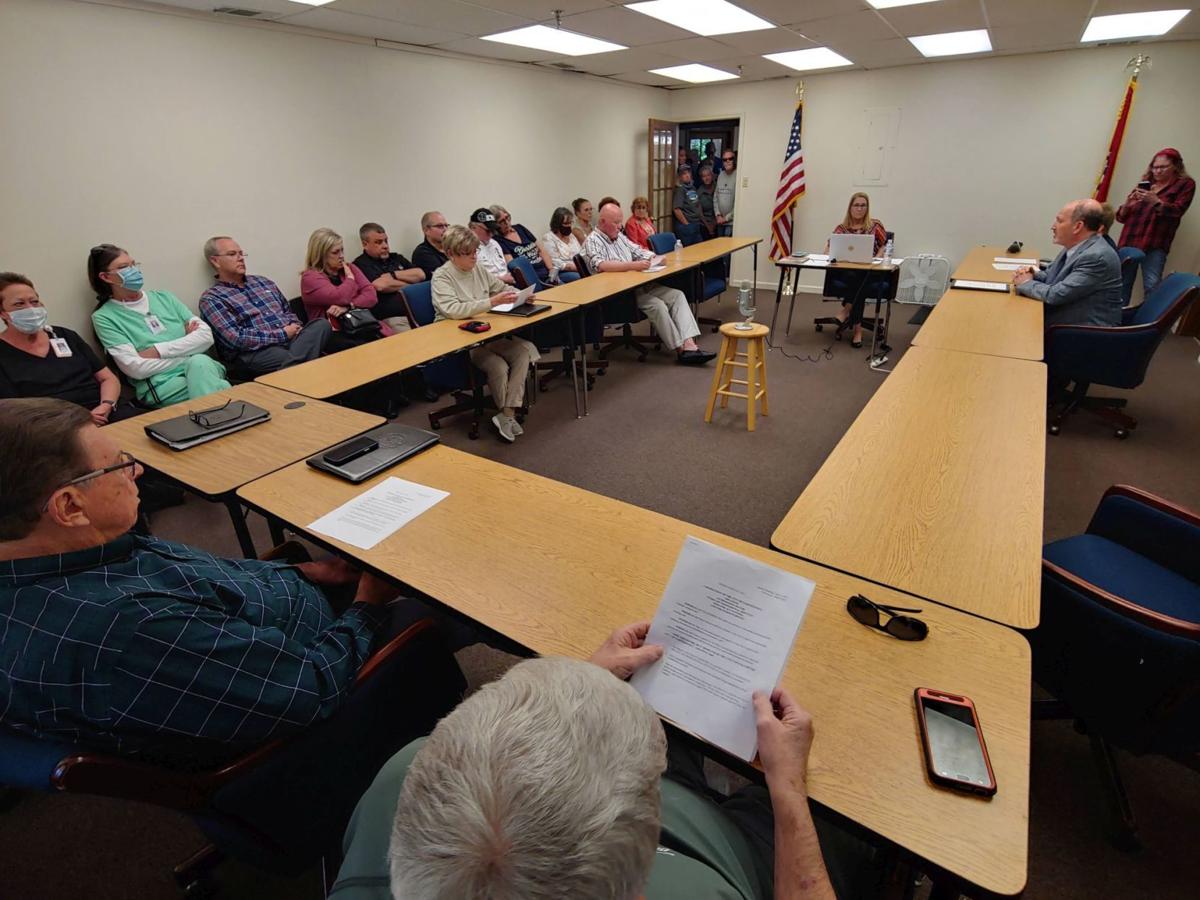 The May 5 special council meeting in Fairfield Bay. The meeting was convened, a resolution was passed and then the meeting adjourned. The public gallery was seated against the wall.

The crowd outside city offices prior to the May 5 meeting. “Support EMS” sign.

The May 5 special council meeting in Fairfield Bay. The meeting was convened, a resolution was passed and then the meeting adjourned. The public gallery was seated against the wall.

FAIRFIELD BAY — A May 5 announcement about the suspension of operations by Fairfield Bay EMS, the city’s volunteer ambulance service, led to a heated city council meeting that afternoon over concerns about coverage.

In an unsigned statement released to the press and handed out at the council meeting, the action was described as “... temporary administrative steps … required by Human Resources protocols for the state of Arkansas.”

That same day as the announcement, Fairfield Bay called a special council meeting for 2 p.m. By 2 p.m. a crowd of about 100 gathered outside the city office, a number in shirts marked with the Fairfield Bay EMS logo. Several expressed concern about the city’s decision to suspend the ambulance service’s operations and at least one hand-made sign supporting EMS was visible.

Doors were opened at 3:35 p.m. with a limited gallery due to room size. Following was a very short council meeting which quickly convened, then passed a resolution permitting the mayor to “retain the professional services of certified public accountants.” The meeting was then quickly adjourned, with City of Fairfield Bay Mayor Linda Duncan and City Attorney A.J. Kelly vacating the room.

As they left shouts were heard as some asked to be able to address the meeting regarding concerns about service suspension, including EMS service co-Captain Tim Hallett.

What followed was a number of members of the public asking questions about why the service was suspended and at time berating council members for the service having been suspended.

“Our hands are tied,” Councilman Robert Otis told the crowd, as other council members nodded.

Otis, joined with others, explained that the state laws which govern personnel policy do not allow them to comment on any issue. Apparently at issue was the status of Fairfield Bay EMS Captain Andrea Notz.

The fact that the council was unable to discuss the situation did not help the mood of those gathered. At least one person shouted that “This is a vendetta against Andrea [Notz].”

It was not forthcoming, as council members, again, explained their hands were tied in being able to respond.

“This is unacceptable,” Kimmons said.

Joining her were calls from others in the room, including questions about Duncan’s ability to lead and how volunteers on the EMS department were under appreciated.

His issue was, James said addressing the still-seated council members, that no arrangements had been made for Medic One provision as was stated in the May 5 release.

From the statement: “Medic One has agreed to provide ambulance service for the City of Fairfield Bay.”

This was not the case, James said.

Kim Mann said she received a call from Fairfield Bay that the service was being suspended, but had not entered into an agreement with the city to provide ambulance service during the EMS suspension. Her service had agreed to put additional staff on beyond what was contracted with the county, but that would come to an end May 9, she said.

Medic One currently holds the ambulance contract for Van Buren County, where most of Fairfield Bay resides. Its contract with the county has it with two Advanced Life Support (ALS) ambulances in service, and a third Basic Life Support (BLS) ambulance crew on-call. The difference between ALS and BLS is the qualifications of the crew, with an ALS ambulance having a paramedic on board, able to provide more advanced care.

ALS is available 24/7 while the BLS crew is on-site 11 a.m. to 7 p.m., per the contract. Kim Mann, at the May 5 meeting, said the BLS staffing would extend to 24 hour shifts until Sunday.

Medic One maintains an ambulance station in Clinton. Early in its agreement with the county it agreed to station its second ambulance in Shirley, at a station near Fairfield Bay. That station did not have an ambulance at the Shirley site May 5, although an ambulance was seen parked at Burnt Ridge Fire Department, roughly half-way between Clinton and the Shirley station.

This was a logistics decision at the time, Kim Mann said.

Fairfield Bay announced Friday that it had reached an agreement with Medic One for a staffed ambulance to serve the city. From a social media post by Duncan: “The City Of Fairfield Bay has a signed MOU with Medic One to provide coverage until we can work through the Human Resource Inquiry and get Fairfield Bay EMS back in service.“

The city had in the past reviewed its ambulance service. Duncan had said in March that the city was reviewing its ability to provide ALS service to its residents.

“The city of Fairfield Bay is currently exploring its option for providing an ALS service for its residents and resort guests,” Duncan said in a March interview. “I’m not doing anything but exploring right now.”

At the time Notz said ALS was available to Fairfield Bay residents, since EMS would call a Medic One ambulance as needed.

Kimmons said in a later interview that Indian Rock may call on Fairfield Bay EMS as often as five times a day for transport or other needs.

In an email interview, Duncan said Fairfield Bay EMS had one paid employee. The service bills insurance companies for service which is then processed by the City Clerk once received. In 2020, EMS billed $291,205.34. Its budget for that same year was $263,081.76.

Hallett said after the May 5 meeting that the service is supported by 38-40 volunteers who serve a 24 hour shift 36 days per year.

“Our hands are tied”