Thursday’s Quorum Court meeting closed with Judge Jerry Holmes making the announcement that he will retire at the end of September to spend more time with his family.

“A lot of thought, prayer and family discussion over the last few weeks has led to my decision. Recently my son Justin came back to work with the family. Now that I have both of my boys and my five grandchildren by my side, we plan on expanding our business and our cattle operation. This will no doubt take a lot of my time. Reaching the age of 65 next month has made me realize how short life really is. I have spent a good portion of my life working in some capacity for Cleburne County and now I want to spend what quality time I have working with my family. It has truly been an honor to serve as your County Judge and I wish the very best for all of you and our County in the years to come.”

A moment of silence passed before someone said “You deserve it,” and then everyone stood to gave him a standing ovation.

No consensus on EMS

Several citizens voiced their disappointment in a civilized manner after members of the Cleburne County Quorum Court voted against helping fund any expansion for Survival Flight.

Negotiations brought the recent vote down to one location, north of the lake, along with the creation of an oversight commission to hold the service accountable by identifying and solving any problems that might arise. During the discussion, concerns arose about the differences between Survival Flight Inc., versus Survival Flight EMS; along with questions about the existing franchise agreement with Heber Springs, which is supposed to cover the entire county.

A lot of other counties have wrestled with the challenge of providing rural ambulance service. In some counties, voters were willing to pass a household to fund that service.

“Our county is blessed enough, we don’t want to do that or have to do that, to provide necessary life support,” said Judge Jerry Holmes.

Rural ambulance service can be done, and there are many ways to make it a reality, but which path is the right fit for Cleburne County remains elusive.

In other business, the Cleburne County Quorum Court voted to allow the The Sand Wedge Restaurant at 5 Kustrin Drive in Drasco, to apply for a private club permit with the Alcohol Beverage Control Board, but it was not unanimous.

Henegar brought the request before the quorum court, but did not vote in favor of it.

“My stance is: my district, and quite frankly the county as a whole, has chosen to remain dry, and I don’t feel like my position gives me any reason to override their wishes, so my vote would be ‘No,’ based on that,” he said.

Henegar, along with Justices of the Peace Evans and Roger Pearson voted no, but the motion passed.

{span}The Cleburne County Library from hosted a children’s program on Saturday, June 19. Denis Dunderdale with the Arkansas Game and Fish presented a program on alligators in Arkansas and brought a live baby alligator with him.{/span}

As a result of the training, members of both law enforcement offices, along with agents from CLEST, were certified in driving techniques and operations specific to these armored vehicles. The training included proper maintenance, inspection, and operation procedures, as well as rescue techniques and team work. The training was conducted at Rose Bud Off-Road Park, where drivers were required to maneuver the ARVs through a series of obstacles, including mud, water, inclines, declines, serpentines, and backing obstacles.

“ARVs are used by law enforcement agencies all over the world in different capacities, and have been a great tool for navigating difficult terrain and high waters to rescue people during and after natural disasters, and for keeping police officers safe during high-risk operations,” Brown wrote in a press release.

Cleburne County has an ARV through the Law Enforcement Support Office, with the emphasis placed on using it as a rescue vehicle during incidents such as the tornado that struck Cleburne County in September of 2020. ARVs are highly sought after by law enforcement agencies, and because they are available at no cost to the agencies through the LESO program, they can be very difficult to obtain.

“We’re very excited to be able to add the unique capabilities of the ARV to the Sheriff’s Office’s “toolbox” for serving Cleburne County. We’d also like to say a special thank you to the Saline County Sheriff’s Office for putting on the training and bringing two of their ARVs, and Rose Bud Off-Road Park. 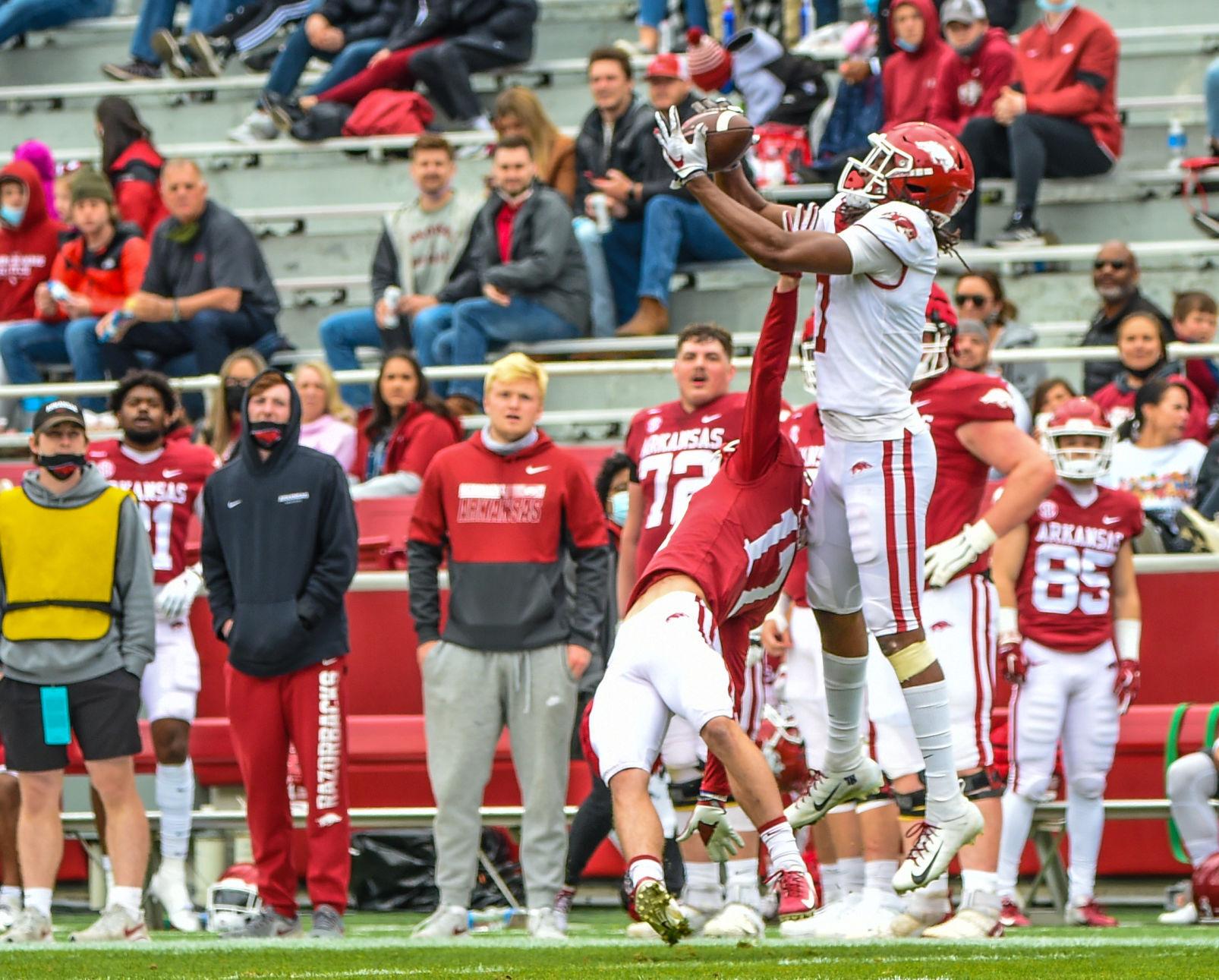 Razorback wide-receiver Trey Knox (#7) from Murfreesboro, TN goes up high to make a catch during the Red-White game at Donald W. Reynolds Razorback Stadium in Fayetteville.

News
Warrant issued for suspect in hit and run

A warrant has been issued for the arrest of Jennifer Lacroix, 45, of Heber Springs, charging her with leaving the scene of an accident causing personal injury or death, a class D felony.

The warrant stems from an incident on June 29 at Miller Creek Bridge when a man told Batesville police that he was struck by a vehicle.

According to the affidavit, Ernest Burris told Officer Jordan Akins that he was walking north on the northbound side of the roadway when he was struck by a vehicle that was also traveling north.

Akins noted in his report that Burris was complaining of pain in his left arm and chest area and would eventually be taken to White River Medical Center for treatment. Burris did offer a description of the vehicle, a Toyota Tundra.

A vehicle matching that description was located at Economy Inn at 2220 E. Main in Batesville, according to the affidavit, a Toyota Tundra “with front end damage and the passenger-side mirror folded back causing a dent underneath it.”

Sergeant Shane Hightower, who spotted the truck in the parking lot of the motel, made contact with the truck’s owner, Christopher Williams, who stated that he had not driven the truck that day.

Lacroix was also in the room and admitted to driving the vehicle earlier in the day, “but not recently.”

Investigators Freddie Friar and Dillon Salas along with Lieutenant John Scarbrough then arrived and began inspecting the vehicle.

When officers popped the hood and inspected the engine, they noticed that “the radiator hose was still hot,” according to the report.

They also noted a “medium-sized dent on the front of the right front quarter panel (fender).

The passenger mirror had been struck with enough force to cause it to fold back, striking the vehicle, causing a dent.”

The report also stated that camera footage from two different businesses confirmed that the truck was in the area within the time frame of the incident.

The report also states that the victim identified Lacroix from a photo lineup of “five other white females having similar characteristics.”

Lacroix was not in custody as of Monday.