Federal charges are being filed against a Quitman man after a large methamphetamine seizure followed an Oct. 23 traffic stop.

Drugs with an estimated value of over $400,000 was recovered, as well as 34 guns and $17,000 in counterfeit currency during the investigation.

The Cleburne County Sheriff’s office stated it had begun an investigation of Brewer after receiving a tip in May that he was trafficking narcotics and other illegal items into the county. The office opened a joint investigation, which initially included the Drug Enforcement Administration, 16th Judicial Drug Task Force and Heber Springs Police Department.

The investigation determined Brewer was going out of state to pick up drugs and bringing them back to Cleburne County.

On Oct. 23 just after midnight, Arkansas State Police stopped Brewer on Interstate 30 just outside Malvern for driving 76 in a 70 mph speed zone. His 2018 Chevrolet pickup truck was searched and eight pounds of methamphetamine with an estimated value of $358,400 was recovered. He was charged with trafficking controlled substance. A gun was found and he was also charged at that time with simultaneous possession of drugs and firearms. An affidavit states Brewer had a “large quantity” of cash when he was stopped.

Based on the traffic stop, search warrants were gained for Brewer’s Cleburne County business and a storage unit in Heber Spring. An additional warrant was gained for his Faulkner County home, also in Quitman.

Drugs were found in both the business, and in a trailer in the storage unit. Thirty four guns, including three stolen guns, were also found, as well as $17,000 in counterfeit US bills, per the Cleburne County Sheriff’s office. Officers also found “a complete clandestine methamphetamine lab” during the search.

Total drugs confiscated have an estimated valued of $408,604, including $50,204 of narcotics and the $358,400 in methamphetamine found during Brewer’s traffic stop.

Listed as confiscated drugs in the Cleburne County statement:

A search warrant affidavit states Brewer had recently purchased a “large quantity of ether” from a Cleburne County part store “.... which is commonly used in conversion labs in the methamphetamine manufacturing process for distribution.”

Authorities seized firearms and binders with instructions on how to make methamphetamine from a Quitman residence on Oct. 23.

A 20th Judicial Drug Task Force agent sought a search warrant for a residence on Brewer Hill off Highway 107 in conjunction with an investigation the Cleburne County Sheriff’s Office was heading.

According to the search warrant affidavit, a Cleburne County deputy had launched an investigation against Brandon Brewer of Quitman, who owns a business in Cleburne County but lives in Faulkner County. After the Quitman man was arrested in Malvern early in the morning on Oct. 23, local authorities sought a search warrant to see if Brewer had methamphetamine hidden at his house.

Police suspected the Quitman man could have drugs at his residence given the large quantity of methamphetamine – about 8 pounds – he had with him when he was pulled over in Malvern by an Arkansas State Police trooper on Oct. 23, the affidavit states.

“Brewer also had in his possession a firearm and a large unknown amount of U.S. currency that was seized by the Drug Enforcement Administration,” the affidavit reads in part. “After speaking with Field Agents from [the] DEA, information was given that Brewer had purchased a very large quantity of Ether from a local parts store in Cleburne County, Arkansas which is commonly used in conversion labs in the methamphetamine manufacturing process for distribution.”

Online records show the search warrant was conducted at Brewer’s residence at 12:09 p.m. Oct. 23 after Circuit Judge H.G. Foster approved the search warrant request. Authorities completed the search by 2:27 p.m. and seized two handguns, a backpack with 11 magazines, two binders “containing paperwork on how to manufacture methamphetamine” as well as four motorcycle jackets as evidence, according to the search warrant inventory list. 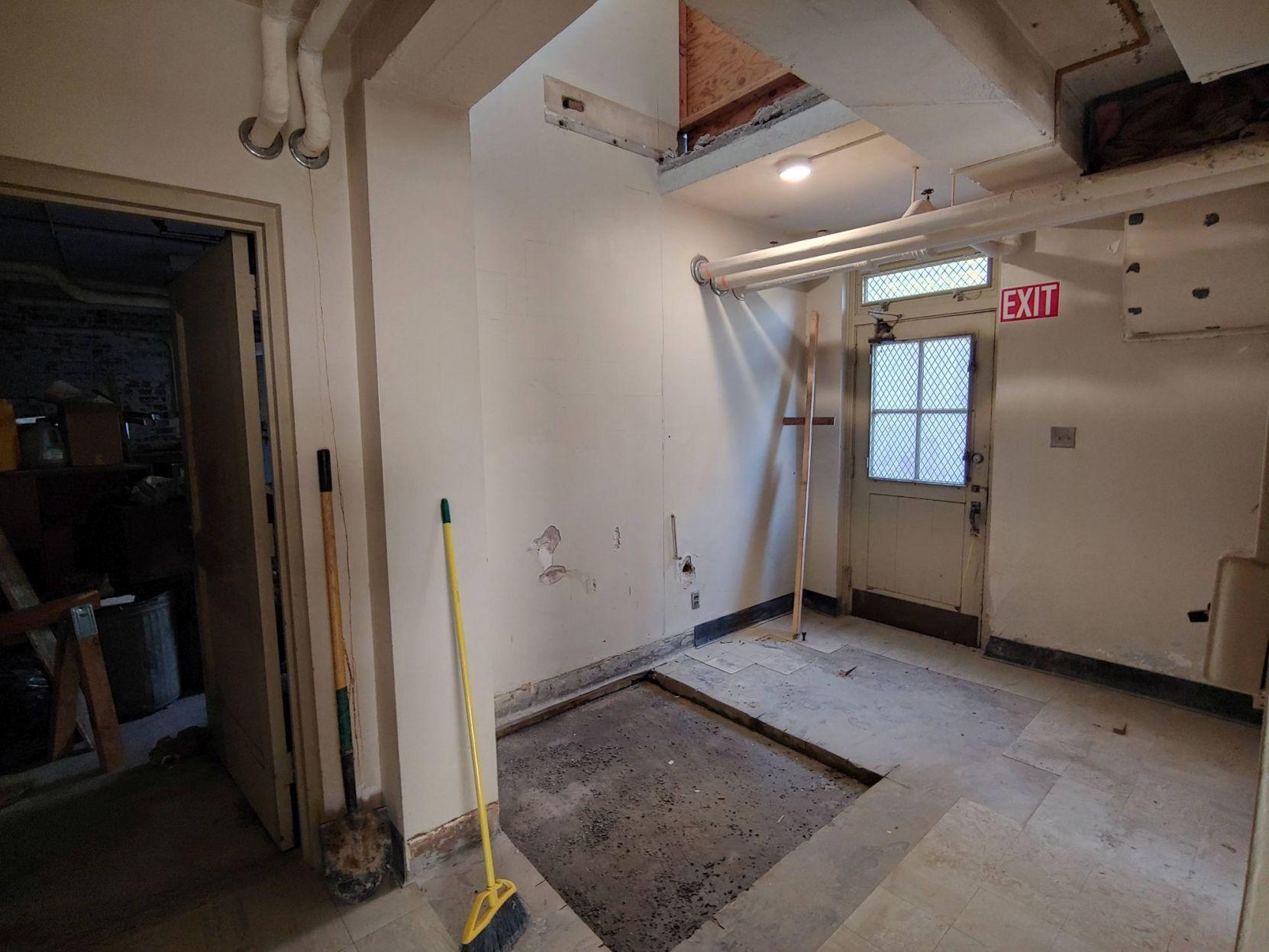 The foundation has been laid and cuts made for the installation of a new elevator at the Cleburne County Historical Society at 103 Main Street. The elevator will allow the use of the building’s basement for storing county records, Historical Society VP Wetzel Stark said.

The cost of the chair-type elevator was covered by an estate and will incur no cost to the county or city, Stark said.

After a series of social media posts made late last week and attributed to him, the City of Marshall, Ark. Chief of Police Lang Holland has resigned.

The posts, made to the site Parler, were made Friday, Nov. 6 while the Nov. 3 General Election was being resolved. The posts called for violence to “Marxist Democrats” and that President Donald Trump would retain the presidency.

News organizations called the election for Vice President, now President-elect, Joe Biden on Nov. 7, the day after the posts were made.

In the Parler posts, after calling for Trump as president for four more years, user “Langholland,” listed as “Chief of Police for a small town in Central Arkansas,” called for readers to “not forget what these Marxist Democrats have tried to do” and called for violence, beginning with throwing water at “them” in restaurants and pushing them off sidewalks, calling them traitors.

“Never let them forget they are traitors and have no right to live in this Republic after what they have done,” the post concluded.

In a separate post, Langholland stated: “Death to all Marxist Democrats. Take no prisoners leave no survivors!!”

An additional post took Black Lives Matter (BLM) and Anti-Facist (ANTIFA) protesters to task, assuring that members of that group would be “... real sorry real soon.”

Parler is a social media website begun in 2018. Billing itself as a “free speech social network,” it has become popular with political conservatives.

The Nov. 7 letter was posted as an image to Facebook and states: “The City of Marshall strongly condemns the actions of Mr. Holland in his posts to social media. His remarks in no way reflect City Government or the people of Marshall Arkansas.

“Mr. Holland is no longer employed with the city,” the letter continues.

The Nov. 7 letter concludes: “I have been Mayor of Marshall for the past 6 years and a lifelong resident of Searcy County. This is a great community, we are family. The Marshall Police force is here to served and protect EVERYONE. Working together we believe we have strong future and a great town. Kevin Elliot Mayor City of Marshall.”

Holland has been in the news in the past. In 2014, as a Searcy County Deputy, he was in a shoot out with a man holding two people hostage in a business. Holland was shot in the exchange and received an Arkansas Medal of Valor for his actions. The hostages escaped and the gunman later succumbed to injuries received in the shootout.

Holland was again in the news in July when he announced his department would not enforce the mask mandate by Gov. Asa Hutchinson, stating the mandate would create a “failed communist state.”

A Fairfield Bay man wanted on a parole absconder warrant was arrested Oct. 29 after reportedly getting into a fight on the side of the interstate.

An Arkansas State Police trooper wad alerted of a fight in progress at 1:12 p.m. Oct. 29 near mile marker 127 on Interstate 40, according to a probable cause affidavit.

As the trooper pulled up to the scene, the report states he saw two men “attempting to change a flat tire.”

The man who had been driving the vehicle, 33-year-old Justin P. Hoffman, was a parolee wanted on an absconder warrant.

Trooper Carey L. Earls opted to search Hoffman’s vehicle after the 33-year-old Fairfield Bay man mentioned having “paraphernalia inside a red box inside the car,” according to the report.

The officer ultimately found a glass pipe with methamphetamine residue and a digital scale in the box and arrested Hoffman due to the outstanding warrant along with the additional drug-related charge.

Online records show that Hoffman was formally charged Nov. 3 in Faulkner County Circuit Court with possession of drug paraphernalia, a Class D felony and is scheduled to appear next on Nov. 23 for a plea and arraignment hearing. 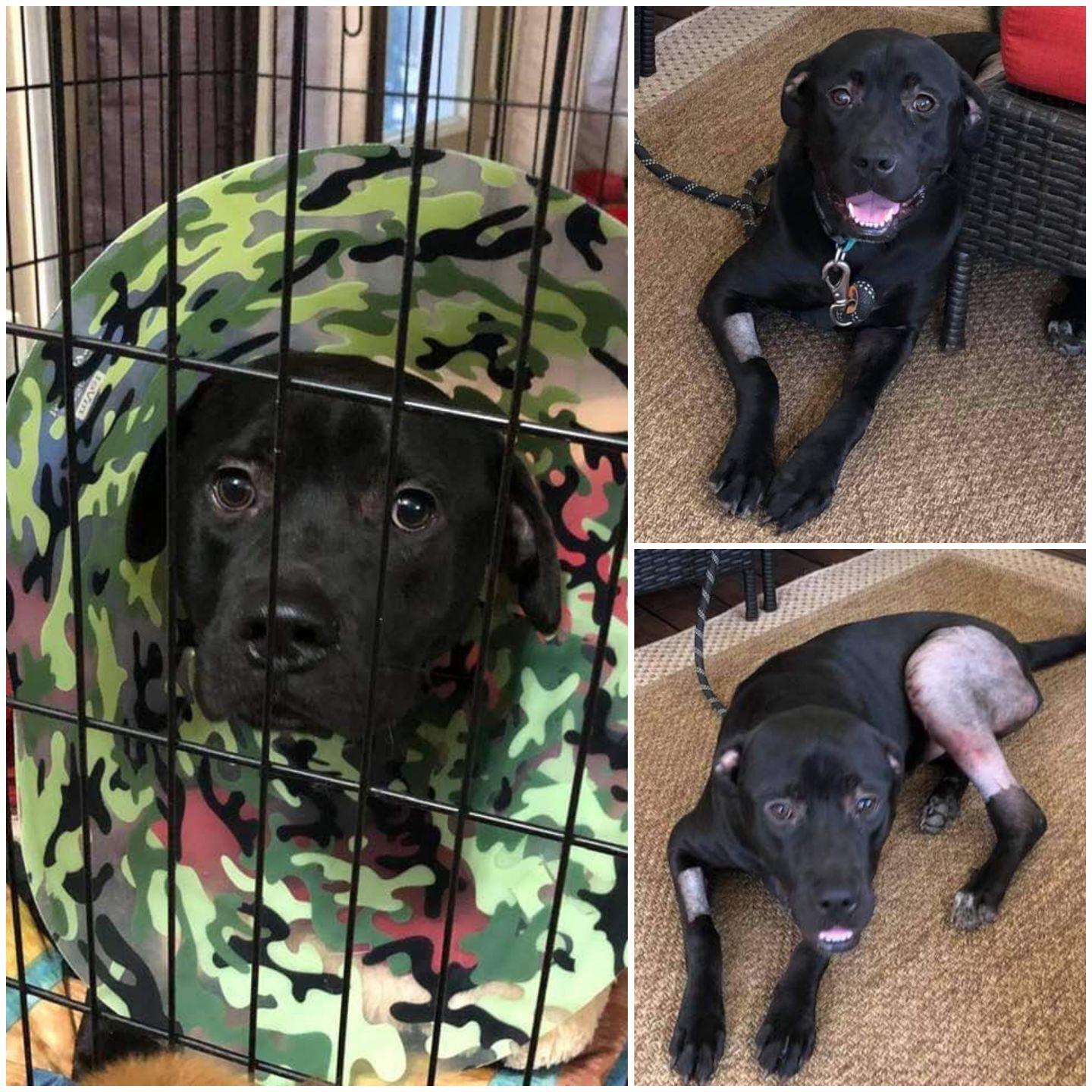 Adoptable pet of the week

Justin is a one-year-old lab mix who found himself at the shelter with 2 dislocated knees and 2 torn ACL’s which have been repaired. He is recuperating at a wonderful foster home. His foster mom, Chris, calls him “Lucky” and she can’t say enough about how sweet he is. He gets along with both their big and little dogs. She brags about Lucky everyday on Facebook and shows pics of his recovery. She says he never quits smiling and wagging his tail. He will need a special home when he recovers. Can you be that special person? If you are interested in adopting Justin / Lucky or any of our other animals at the shelter, please contact davidianne@suddenlink.net

An Oregon man is behind bars in connection to his alleged involvement in the 2004 killing of Rebekah Christian Gould.

William Alama Miller, 44, is currently behind bars in the Lane County Jail in Eugene, Oregon, awaiting extradition to Arkansas.

Miller is charged with first-degree murder in connection to Gould’s death. Authorities said her body was discovered 16 years ago on a hillside off Highway 9, just south of Melbourne.

The 44-year-old murder suspect was arrested Saturday by a special agent with the Arkansas State Police after authorities learned he’d returned home “following an extended stay in the Philippines.”

Gould was reported missing by family in September 2004 a few days before her body was found off Highway 9. The 22-year-old woman’s body was recovered on Sept. 27, 2004, following a community-based search in Melbourne and across Izard County.

“Special agents of the Criminal Investigation Division have devoted hundreds of hours to the case which was never classified as a cold case,” ASP officials said in a news release on Monday.

“The special agents assigned to this case never abandoned any hope of finding the necessary evidence and facts to lead them to a suspect and an arrest,” he said. “This case is a testament to the Criminal Investigation Division and the devotion the special agents assigned to the division possess in helping police and sheriff’s departments across Arkansas with their toughest cases.”

In September 2020, Arkansas Foodbank received Temporary Assistance for Needy Families (TANF) funding through the Arkansas Division of Workforce Services to reduce hunger in Arkansas through collaborative efforts. Administered by Arkansas Foodbank, the Emergency School Pantry Program will be implemented in partnership with six Feeding America foodbanks and 50 school districts throughout the state.

The Arkansas Temporary Assistance for Needy Families (TANF) program was created to help families stay together by empowering family leaders with job skills, resources and assistance. This project meets one of TANF’s primary purposes: to provide assistance to needy families so that children may be cared for in their own homes or in homes of relatives.

“Arkansas is focused on making sure families impacted by COVID-19 and poverty have the assistance and resources they need,” Phil Harris, ADWS Assistant Director-TANF said. “We want these resources to be easy to access and available for all who need them, and partners like Arkansas Foodbank make that possible. We will continue working with our partners in government, non-profit, and the private sector to come together and support families in Arkansas.”

Families with children in Heber Springs School District who are enrolled in a USDA children’s feeding program like Free and Reduced Lunch, Summer Feeding or Afterschool program can contact Bonnie Webber at bonnie.webber@hssd.k12.ar.us for more information on how to receive emergency food boxes.

The TANF program is operated within the Arkansas Division of Workforce Services (ADWS), a division of the Arkansas Department of Commerce. TANF was created as part of the larger Personal Responsibility and Work Opportunity Reconciliation Act (PRWORA) of 1996 and replaced Aid to Families with Dependent Children (AFDC). It is focused on workforce development, supporting participants in their pursuit of employment and financial independence by providing transportation, childcare assistance, education, job training, employment opportunities, and other services. For more information on ADWS or the Arkansas TANF program, visit www.DWS.arkansas.gov.