It’s a vicious cycle: People use drugs, get arrested, bond out, and use again.

Since the grant started in mid-February, the two investigators and the peer recovery specialist have responded to 17 overdose incidents, and have got five of those individuals into treatment.

“I would like to encourage anybody who is struggling with a drug misuse problem, whether you are in the back of a police car, in the back of an ambulance, or sitting at the kitchen table with your family, to just say “ I need help”. The people who know you already know you need help, they just need you to say it so that your recovery journey can begin,” Ramsey said.

He remembers “everything” about the ten times he overdosed.

Once he had a drug-induced seizure, bit off the sides of his tongue, and woke up in the hospital. Another time he spent two days unresponsive on a couch after taking meth with synthetic fentanyl in it.

“Right now we’re working on getting the word out, I’ll be doing community outreach and speaking,” Ramsey said. He will be able to connect with people during overdoses, whether it’s the person who actually overdosed or their families, their friends, their relatives, anybody, not only help the person that is addicted, but also the families and friends.

Recovery plans aren’t simple. It takes several years for most people. Ramsey will help users form their recovery plan, be their liaison for court proceedings, help them rebuild life skills, get their driver’s license back, get their children back, and, perhaps most important, advocate for their treatment.

There are 145 treatment facilities in the state and in the five-region area, there are 21 for men and 16 for women. Part of his job is finding the user the right facility. Some facilities won’t take people who have Hepatitis C, for example.

The road to recovery is long. Ramsey said after he quit using, he had about a year of drug-induced psychosis for nearly a year. It’s something he works on every week, by attending recovery meetings at Believers Community Church and Batesville First Assembly.

He says one thing that wasn’t affected by the pandemic was drug use. In fact, more people who were getting clean were having longer relapses.

Izard County Sheriff Jack Yancey has been seeing the impact of the drug epidemic on a continual basis. He applied for the Comprehensive Opioid Abuse Site-based Program (COAP) grants.

“Being able to have two investigators who focus solely on the opioid crisis in these counties will make a big difference,” Yancey said.

Cleburne County Judge Jerry Holmes honored county employee Dale Hutto with the proclamation of “Dale Hutto Appreciation Day” on April 22. A small group of well-wishers surprised Hutto with the proclamation in the judge’s office. Hutto was also presented with a 1911 bolt-action Austrian military rifle from the personal collection of Bruce Ziegenbalg.

The White County Quorum Court made a preemptive strike Tuesday night against the possibility of state legislation being passed that would cut 911 operations funding by more than 25 percent and result in call centers having to consolidate.

“This is very crucial,” Lincoln said. He urged justices to call District 46 Rep. Les Eaves (R-Searcy) concerning the bill and said he has already had conversations with Rep. Craig Christiansen (R-Bald Knob) in District 47, Rep. Cameron Cooper (R-Romance) and Rep. Jim Wooten (R-Beebe). Lincoln said he had sent a text message to Eaves.

Although Lincoln said the latest report he had received was that the bill wasn’t going anywhere, he said the county needed to be prepared in case it did, which is why the JPs approved spending $80,000 to equip the three remaining stations at the White County 911 Operations Center.

Lincoln said “this budget year” was the first time the county “did not have to supplement 911, and I believe our supplement is about $253,000 in times past. We fought hard to get that bill [the Arkansas Public Safety Act of 2019] passed and in less than a year, the Legislature is trying to change it.

“What I have been told is that Rep. Gray that is sponsoring this bill, her sheriff told her that they had more money than they knew what to do with. Well, you’re going on one county, and there’s 75 counties, and I don’t even know what their responsibility is for 911 in that particular county.”

Lincoln said the county currently has six 911 stations at its operation center, so the new stations will boost the total to nine.

“They will be equipped with the computer, the computer screen and what is called the ACIC [Arkansas Crime Information Center], ... where they can pull up an individual and to see if they have a warrant and things like that, plus they will have the address mapping, what is known as the locator when the call comes in.”

“The other aspect is some of the smaller surrounding counties, they may try to make White County a regional hub so that we would dispatch for Woodruff, Prairie and some of the smaller counties around us to reduce the number of PSAPS in the state of Arkansas,” he said.

Why: Bill introduced Tuesday in Arkansas House of Representatives that reportedly would cut funding to public safety addressing points by 25 percent, resulting in $196,341.75 revenue loss for county and $84,776.56 revenue loss for city of Searcy and possible consolidation of call centers 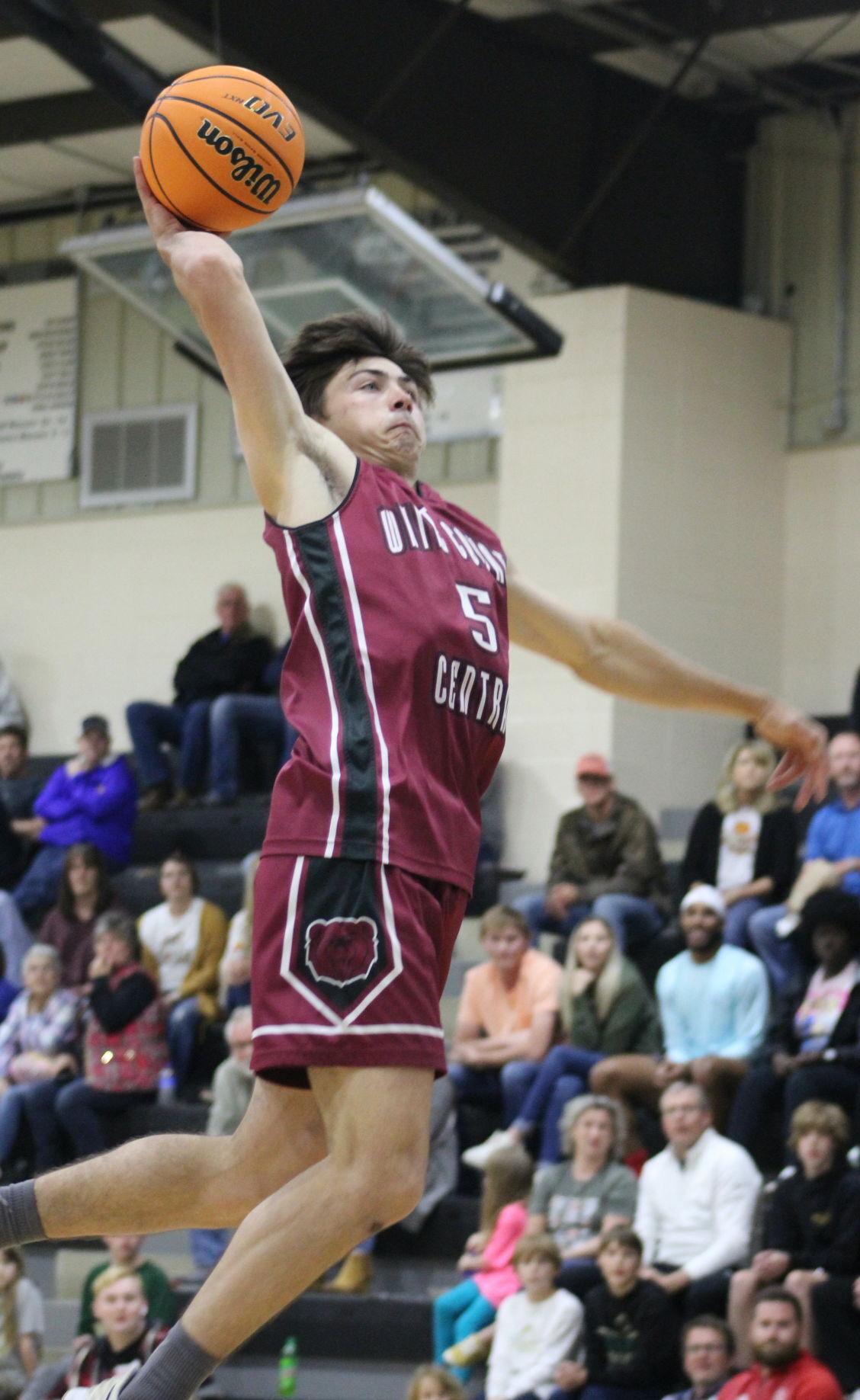 White County Central Bear Dylan Hopkins soars during the dunk contest. He was named the winner after an emphatic windmill slam.

[Editor’s note: The Heber Springs Sun Times and its sister papers in central Arkansas collaborated on this effort. Both parts will look at statewide numbers and local efforts.]

Empty store shelves and rising prices during the peak of the pandemic last year gave some consumers the jitters, but for many rural Arkansans, food insecurity is a party of everyday life.

Aspire Arkansas, a project of the Arkansas Community Foundation, defines and measures food insecurity as “the percentage of households that lack access, at times, to enough food for an active, healthy life for all household members and/or experience limited or uncertain availability of nutritionally adequate foods.”

Many churches throughout Arkansas have a food ministry in one form or another. While some churches collect non-perishables, others have installed community pantries outside their buildings. Weatherproof cabinets with non-perishable goods inside that people in need can access day or night. Some churches have dubbed these pantries “Blessing Boxes.” People are welcome to come by and take what they need and leave what they can share.

Keeping the boxes filled, especially when school is out in the summertime, can require a team of dedicated parishioners.

The reasons behind food insecurity are complex, eluding even Arkansas Foodbank Chief Executive Officer Rhonda Sanders. Attributing it as the “million dollar question,” Sanders noted that until the coronavirus pandemic, the state was making gains, having just recovered from the skyrocketed food insecurity rates which began in the aftermath of the 2008 recession. With all those gains wiped out in only a year, Sanders said the issue of food insecurity isn’t clear cut.

“Hunger isn’t always a disease unto itself,” Sanders said. “Hunger is a symptom of other diseases.” Those diseases, Sanders said, include low rates of college education and income, two categories in which Arkansas ranks alongside the worst in the nation.

Foodbank workers are also aware of the limits of government assistance. Sanders said her warehouse staff attempted to live off the same amount of money an average Supplemental Nutrition Assistance Program (SNAP) recipient gets from the program for a week several years ago. She said her workers were “dropping out like flies” with illnesses due to lack of nourishment.

“Just handing someone a box of food isn’t going to cure [all of their troubles], but it does allow them to use their money to do other things with their lives,” Sanders said.

Every Arkansas Foodbank employee has a story which illustrates the breadth of the problem of food insecurity in Arkansas, Sanders said, recounting the story of being out at one of the organization’s mobile distribution centers and distributing 850 boxes of food in 45 minutes. Moments after the last box was given away, Sanders said, a young woman pulled up with her family and broke down when she found out there were no more boxes.

Per Feeding America, the largest hunger-relief organization in the country, Arkansas ranked second only to Mississippi with a food-insecurity rate of 17.3 percent in 2018.

The coronavirus pandemic, which led to a spike in nationwide and state unemployment rates, only made those food insecurity numbers worse.

Feeding America released a study in March estimating almost 160,000 new Arkansans were food insecure by the end of 2020, or 22.5 percent of the state’s population. One in three children in Arkansas are estimated to currently grow up in food insecure households in the state.

“I can give you all the numbers in the world, but it’s really about the person [who needs assistance]; it’s about the family that needs help.” Sanders said.

Behind the statistics and graphs, there are actual people – people who need help, and people who make up the organizations that stand ready to help.

Seniors have normally made up the army of volunteers it takes to make the food distribution programs successful. Unfortunately, in the time of COVID-19, many of the volunteers were among the most vulnerable to the virus.

The Arkansas Foodbank, which provides food to pantries is a leader in the state’s fight against hunger.

In a typical year, the Arkansas Foodbank helps deliver more than 24 million pounds of food to the counties it services, per the Foodbank’s website.

Due to the coronavirus pandemic, the bank distributed more than 40 million pounds of food last year, a 37 percent increase over 2019.

Arkansas Foodbank Communications Director Lea Whitlock attributes the increase of distribution in 2020 to the challenges the coronavirus pandemic brought on. Normally an organization which works through its partner agencies, the foodbank was forced to pack and distribute its inventory of bought and donated foods directly into the hands of Arkansans in 2020 because so many of the foodbank’s regular partner agencies were closed.

Goals and numbers are great, Sanders said, but the real emphasis should be on the people.

To fulfill its mission, however, the Arkansas Foodbank needs assistance. And while the Foodbank receives lots of food donations it will always welcome (food donations in 2020 were valued at some $40 million), monetary donations are the best method to making a lasting impact on food insecurity in the state.

“We want your money because we can do more with it,” Sanders said.

For every dollar donated to the Arkansas Foodbank, 96 cents of it goes to its food distribution programs to buy and deliver food, per Whitlock. And those 96 cents go further than one might think. The Arkansas Foodbank can use a combination of donated and sourced food and the money to create five meals from one dollar. While canned foods and other non-perishable food donations are easy to donate, the money the Foodbank receives allows them to buy perishable items like produce and fresh meat and other crucial nutritional needs for all Arkansans.

“We’ve been blessed to have wonderful [financial] support and we use our money wisely,” Sanders said.

Despite the challenges and seemingly insurmountable circumstances of food insecurity across the state, the Arkansas Foodbank will keep on its mission, Sanders said. A mission to feed hungry Arkansans and to meet people where they are. A mission to be the foundation in the fight against hunger.

• For every dollar donated, 96 cents goes to food distribution.

• Through donated and sourced food, $1 can create five meals.