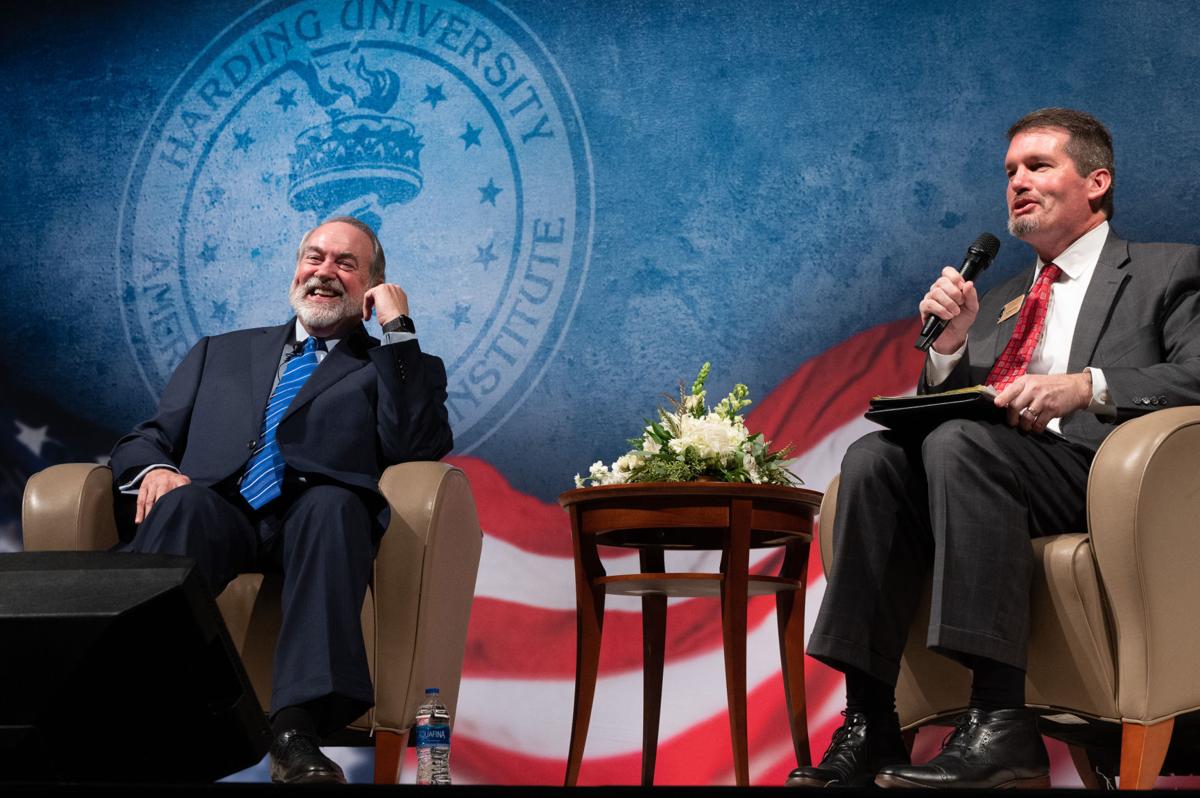 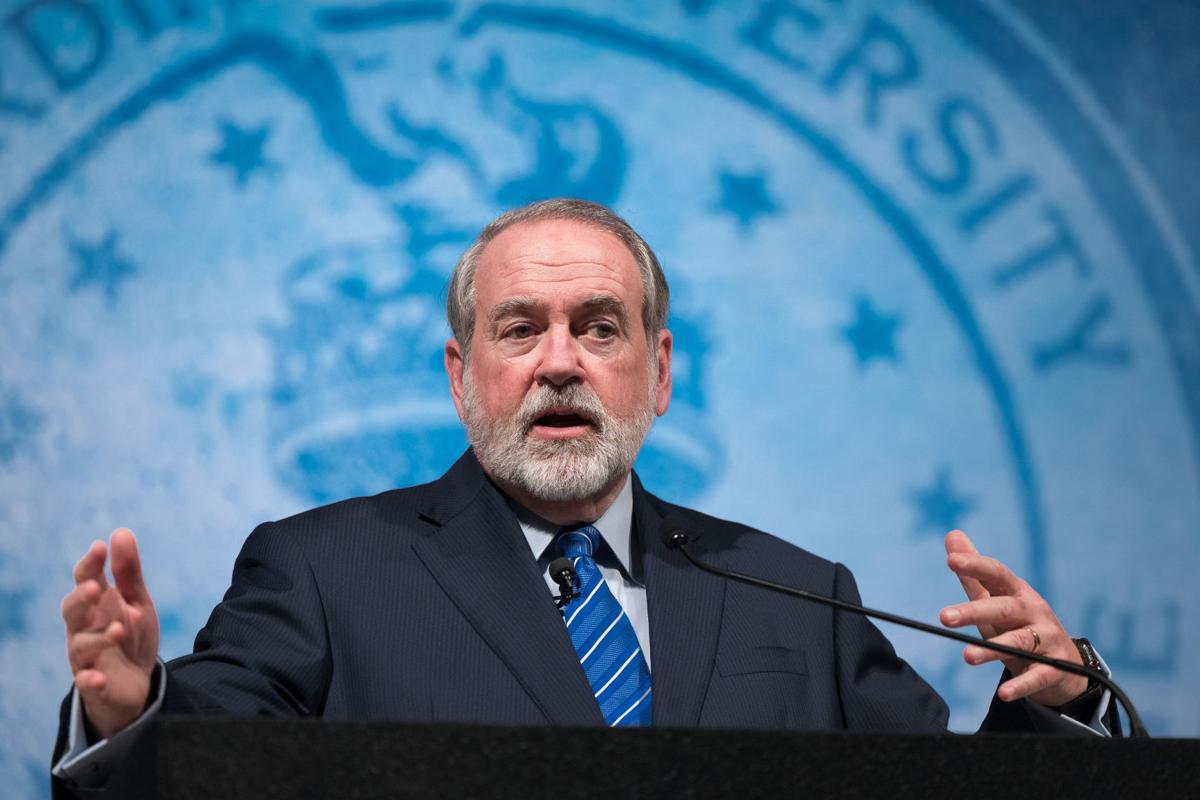 Former Arkansas Gov. Mike Huckabee points out ways the United States has changed since the Sept. 11, 2001, terrorist attacks, including social divisions in the country he blames on the “evil forces of Marxism.”

Former Arkansas Gov. Mike Huckabee points out ways the United States has changed since the Sept. 11, 2001, terrorist attacks, including social divisions in the country he blames on the “evil forces of Marxism.”

When Mike Huckabee last spoke at Harding University, he was governor of Arkansas and it was two days after the Sept. 11, 2001, terrorist attacks. On Tuesday night in the Benson Auditorium, he honed in on seven things he thinks have changed, “not all for the good,” over the past 20 years.

“We got hit hard. We were gut-punched. None of us saw it coming,” Huckabee said during his speech in the American Studies Institute’s Distinguished Lecture Series. “All of us were still raw in our emotions just two days after we saw those airplanes fly into the twin towers and the Pentagon and, of course, the one that went into Shanksville, Pa.”

He said that after 9/11 happened, “I know [Harding President] Dr. David Burks was toying with the idea of canceling the assembly that day. My own staff was struggling with, discussing with me whether or not I should go to an external event so soon after this national tragedy pf 9/11.

“We decided at the Capitol that is was best that I keep the commitment. It was already on the calendar to be at Harding and to their credit, Harding decided it would be best for their students to deal with this.”

He said how the country responded to the terrorist attacks showed resilience.

“As a nation, we did not go home, crawl up under our beds, curl up in a fetal position and wait for the end,” Huckabee said. “We got up on our feet. We embraced each other. We shed a lot of tears. We consoled one another and we resolved that our nation would not fall to radical hateful people who wanted to destroy not just our country, but our way of life, and it was a proud moment in America.”

Huckabee, who held office as a Republican, recalled seeing Democrats and Republicans on the U.S. Capitol steps singing “God Bless America” and the American flag displayed by people from all walks of life. No American was the same after 9/11, he said, and his job was not the same.

“Every government assembly had to be schooled in national security issues because we didn’t know where this was going,” Huckabee said. “At every governor’s mansion and at every governor’s office there was two-way communications with Homeland Security, which was just created in the aftermath of 9/11. All of us had to go through an FBI background check to be given top secret security clearance in the event that there was information that had to be shared to the state level.”

As least for a period of time, Huckabee said America was unified in a way he had never seen it before and has never seen it since.

“Let me be very blunt, in that period of time not one person at a sporting event took a knee in protest to the national anthem or to the waving of the flag. Not one person took a knee,” he said, receiving applause from the crowd. “If anyone drooped to a knee, it was to pray, not to protest.

“You know what was absent 20 years ago? Talk of racism and division.”

Division of the country was one of the seven things Huckabee said have changed.

“The evil forces of Marxism have now divided this country in ways I never thought was possible, along the lines of class, race, ethnicity and gender,” he said, “and today, everyone seemingly wants to take a side on what social class you come from, maybe what gender you are, ethnicity and racial divide.

“Twenty years ago, we weren’t divided at all by anything.”

He said the division is a Marxist element, and “the greatest threat to our freedom and liberties in our country today is that people are embracing an ideology today that in no way resembles the ideology that gave our country its birth.”

“In the Declaration of Independence, our forefathers said, ‘We hold these truths to be self-evident,’ and I love that phrase because it says these are truths so obvious that we shouldn’t even have to explain them, but we will,” Huckabee said, adding that “all men” in the declaration are not endowed by their government but by their creator.

“It doesn’t matter what color you are, what gender, if doesn’t matter if you come from wealth or poverty, and it does not matter whether your ethnicity is Italian or Irish or English or African, it really doesn’t matter,” he said. “The child with Down’s syndrome is every bit as valuable in the eyes of almighty God as is the captain of a football team. There is no difference.

“America is built on the notion that we are individuals and that our freedom and liberties are individually granted to us by God.”

He said Marxism, defined as the political and economic theories of Karl Marx and Friedrich Engels that served as the basis for communism, is collectivism. “Your value is not individual value, your value is whatever you bring to the overall value of the state.”

“That’s not America,” Huckabee said. “America says you matter. You are an important person not because of your last name or your father’s wealth or for what he did for a living or how much land you own or how close you are to the proximity of power.”

EDITOR’S NOTE: This is the first part of a series on the ways that former Arkansas Gov. Mike Huckabee says America has changed since Sept. 11, 2001.

Some clouds in the morning will give way to mainly sunny skies for the afternoon. Much colder. High 49F. Winds N at 10 to 15 mph.