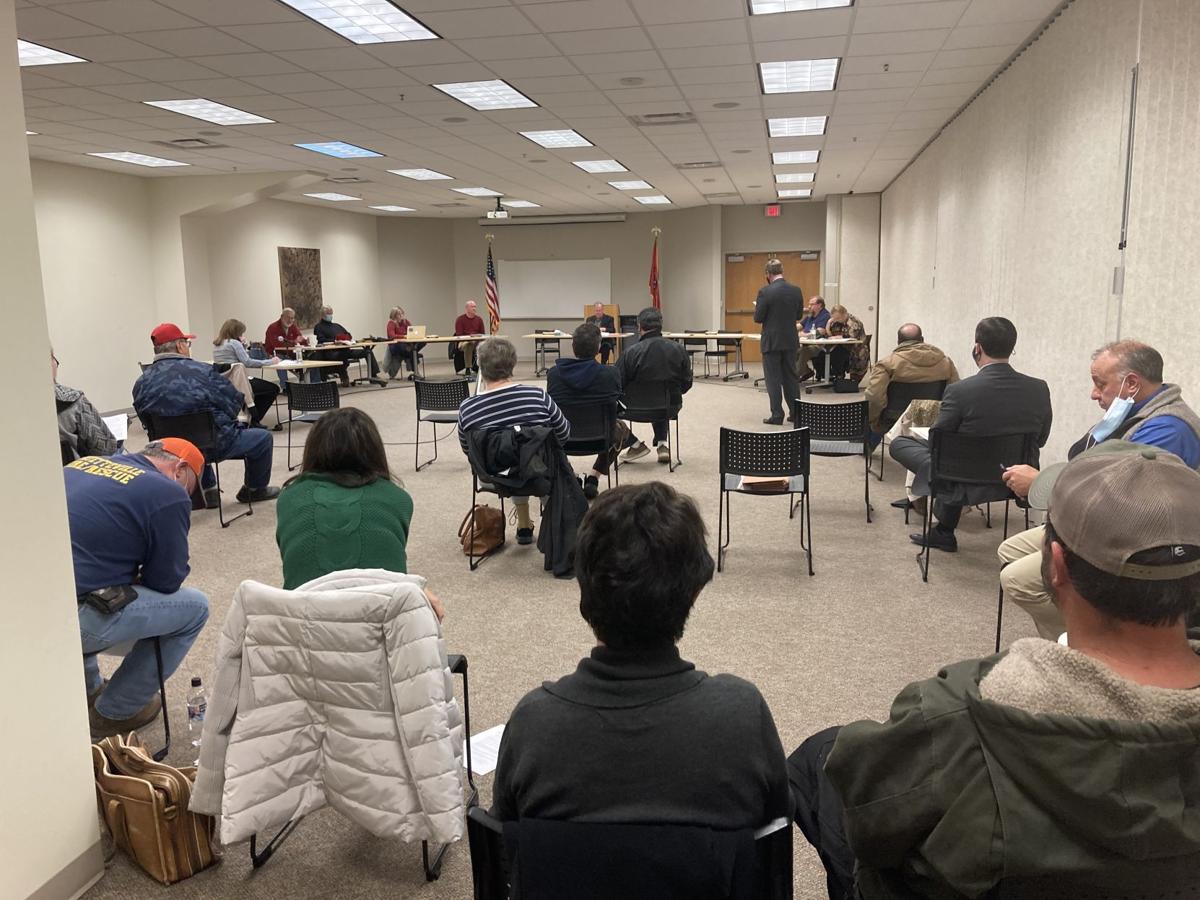 The gallery was crowded for last Thursday’s Heber Springs City Council meeting, in which council members voted to bring a special election before the voters on Tuesday, March 9. 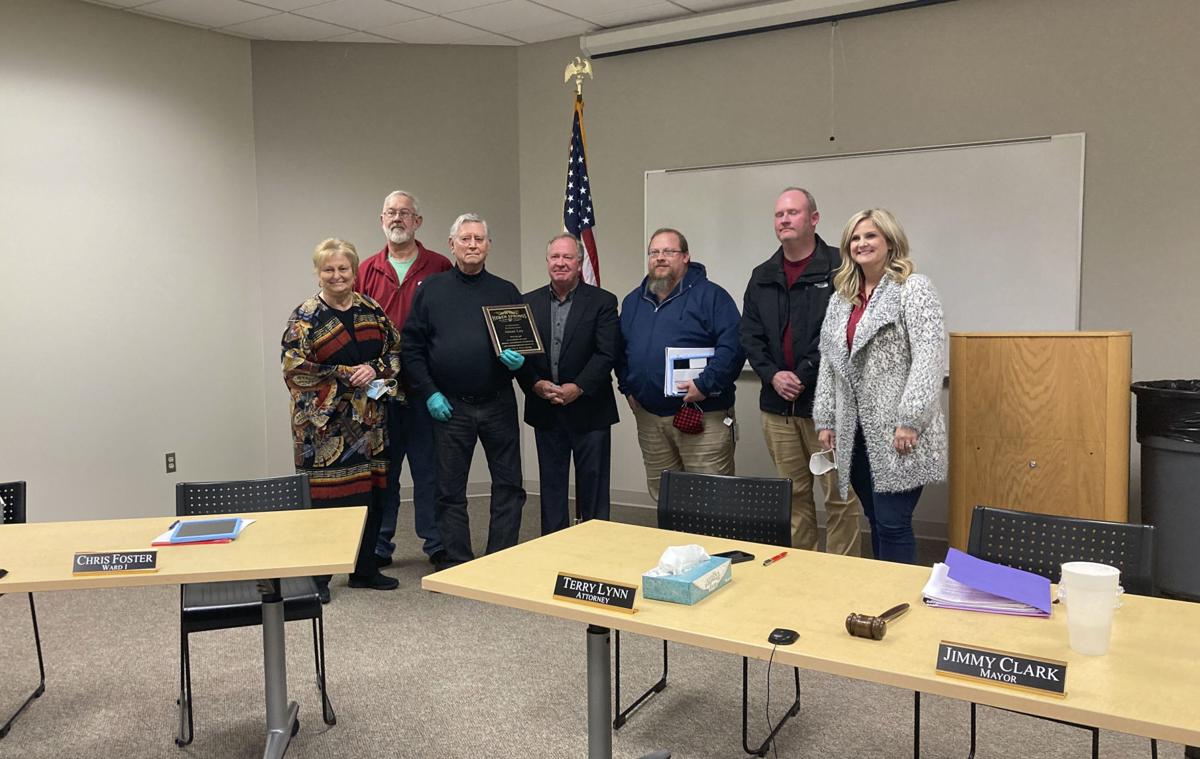 The Heber Springs City Council met for their last regular meeting of 2020. Mayor Jimmy Clark thanked James Lay and Paula Sporn for their time serving the public. Two new council members will be sworn in next year.

The gallery was crowded for last Thursday’s Heber Springs City Council meeting, in which council members voted to bring a special election before the voters on Tuesday, March 9.

The Heber Springs City Council met for their last regular meeting of 2020. Mayor Jimmy Clark thanked James Lay and Paula Sporn for their time serving the public. Two new council members will be sworn in next year.

The Heber Springs City Council voted in favor of bringing a special election to voters on March 9. The “cafeteria-style ballot,” a phrase reportedly coined by alderman Paul Muse, will let voters decide on whether or not to refund and refinance existing bonds to generate an estimated $11 million for city infrastructure repairs.

The ballot will also contain options of what to fund with that revenue. If voters decide not to refund and refinance the existing bond issue, then nothing happens. The 5/8ths bonds will expire in a few years. If the refinancing of the bond passes, citizens could start seeing projects starting as soon as 90 days, depending on weather conditions.

“There were a lot of projects that were cut. We keep getting asked when is the city going to step forward, this is an excellent opportunity,” said Mayor Jimmy Clark. Michael McBride, from Stephens Inc., which is a Little Rock-based financial services firm; and Ryan Bowman, a public finance attorney from the Friday, Eldridge and Clark law firm, went over the ballot wording again and explained why it is a typical tool used by municipalities to fund projects.

Alderman Paul Muse said there would be a series of public town halls at the community center to educate voters about the election issues.

“We would not be asking the voters to do this if we didn’t need it,” Clark said.

Life, and its quality

When a citizen commented that one of the ballot’s projects, a central fire station, would be too loud for people who live in the central part of town, well, that was the conversational equivalent of throwing old lawnmower gas on a smoldering pile of garbage.

“That is the most selfish thing I’ve ever heard. My purpose is to put air in people’s lungs and water on the fires. When you call 9-1-1, it is like pulling a grenade pin. I wish I had more sirens,” said Jason Robitallie, Chief of the Heber Springs Fire Department.

He explained fire engines make such loud noises because they are liable if a distracted driver doesn’t move out of the way.

Alderman Sharon Williams brought a moment of reflection to the contentious moment. A student at school told me ‘Whenever I hear a siren I pray for who it is for,’” Williams said.

The city council approved a written inter-local agreement that, when signed by the county and city, will solidify the “gentlemen’s agreement” between the city and county on how to split the costs and operations of the non-emergency dispatch and non-felony inmate housing.

“Why do the rest of the cities in the county don’t have to pay (the county) as much (as we do)?” asked alderman Ali Sugg.

“The other cities aren’t as big as us,” explained Heber Springs Police Chief Brian Haile.

Haile credited cooperation with county law enforcement in the serving of two search warrants that resulted in the seizure of a half-pound of methamphetamine. They also raised $2,500 for their Shop-With-A-Cop program, which took place Monday night.

The conversation then turned to members of the Cleburne County Quorum Court in gallery attendance at the city council meeting. Alderman Louis Short asked Cleburne County Justice of the Peace Sam Henegar if the motion he made at quorum court last Thursday was predetermined or did he just make it out of anger. Henegar responded by saying the motion was legal.

“So you’re okay with telling people who call dispatch ‘No’?” Short asked

“I’m okay with telling the city to make a plan,” Henegar said.

In other business, the city also established a separate fund for the $280,000 for the Coronavirus Aid, Relief, and Economic Security (CARES) Act funding the city will be receiving.

In the departmental reports, during the month of November, the street department replaced culverts on Searcy, Front, S. 10th, and S.11th streets. The fire department responded to 127 incidents in November. Nine were fires and 100 were rescue and emergency medical service calls. In November the police department handled 44 felony incidents and 11 accidents. They took 159 reports and issued 81 tickets. In the community center report, city league youth basketball has 170 children registered. Practices are Monday, Tuesday, and Thursday, evenings. Games will begin in January.

The city also passed a budget resolution for 2021, and reviewed ordinances that disclosed which city council members have connections to local businesses. The council also appointed Rebecca Prince and reappointed Mary Margaret Couch and Ron Gillespie to the Planning and Zoning commission. The council also appointed Kasey Griffin and Melissa Choate the Advertising and Promotion commission.