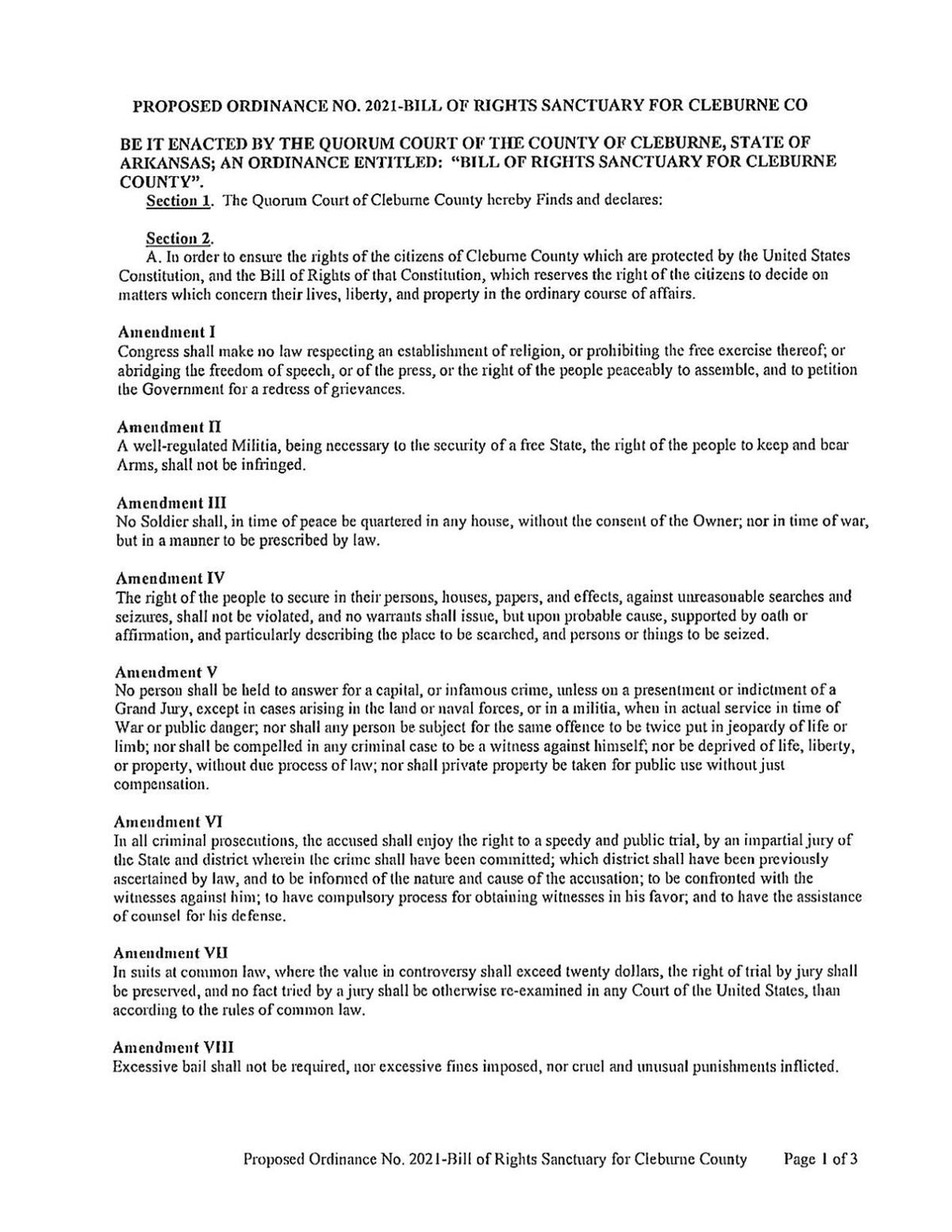 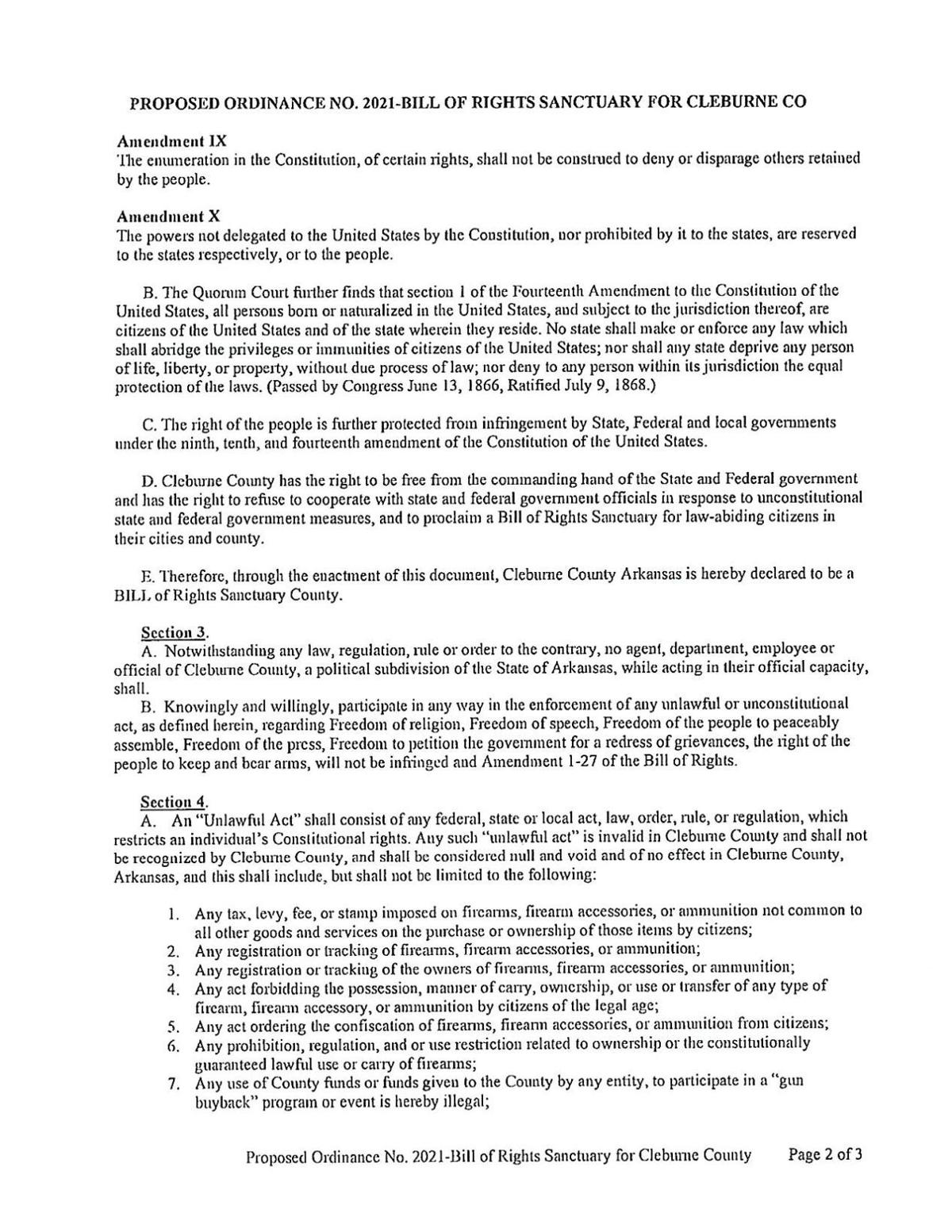 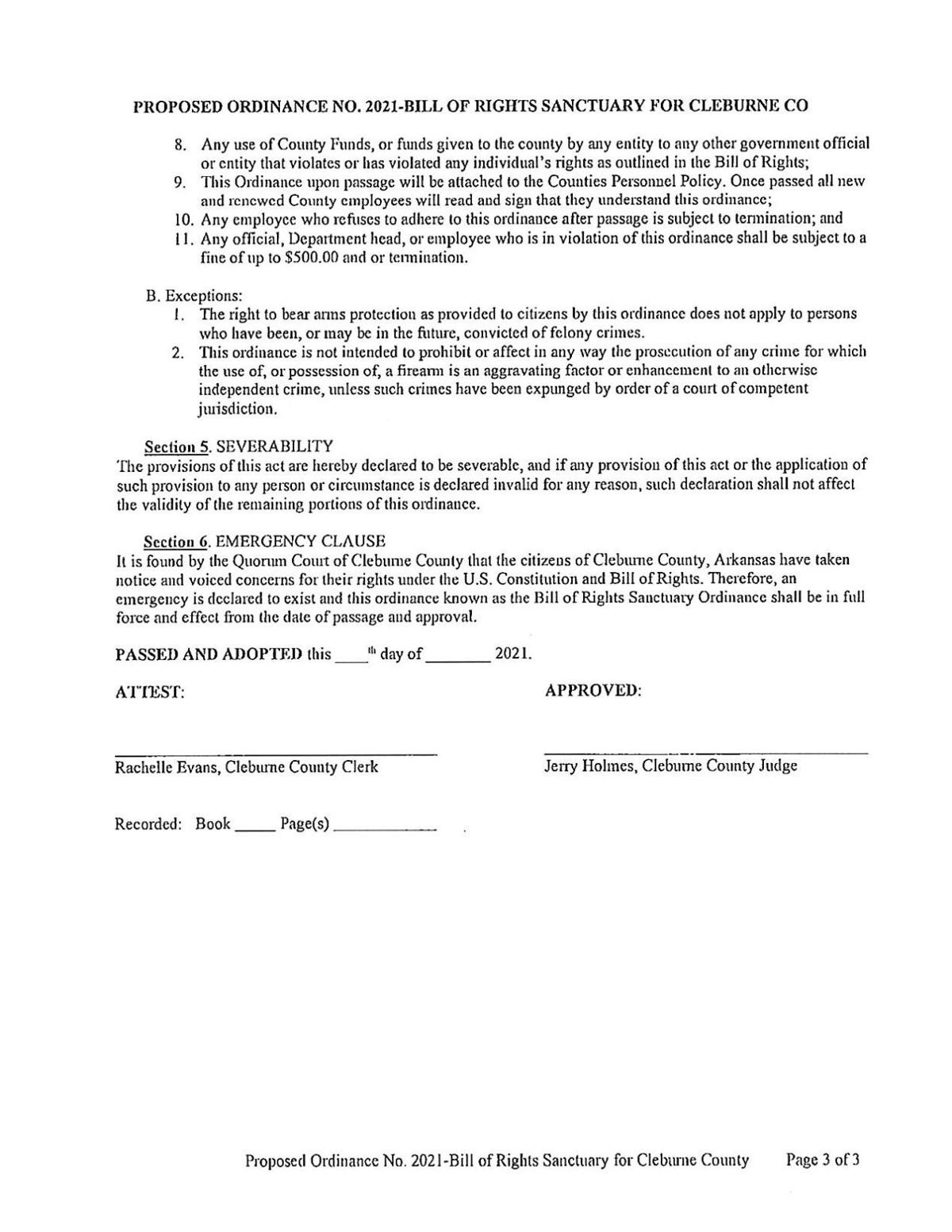 Members of the Cleburne County quorum court voted Thursday to pass a county-wide Bill of Rights Sanctuary ordinance protecting law-abiding, tax-paying, gun-owners from state and federal overreach such as excessive taxation, registration or tracking of firearms in the community.

So, state and federal firearm laws no longer apply in Cleburne County?

“This ordinance is an affirmation of the Bill of Rights,” Holmes said

The vote received a smattering of applause from citizens in the gallery. Justice of the Peace Sean Blackburn sponsored the ordinance. It was amended to remove language that would make signing a written pledge to the ordinance a requirement of county employment. Violating the oath by following state or federal law, would be a reason for termination. The city’s attorney advised the quorum court that such a requirement would leave the county open to numerous lawsuits, so the quorum court removed Section 4, parts 9-11.

The ordinance in its entirety is on the Heber Springs Sun Times webpage.

So-called “Red Flag Laws” are legislation passed to permit confiscation of guns from people who appear to be having a break with reality. But there’s a key phrase in there: “Appear to have.”

Law enforcement officials say the vague wording in these laws make them unenforceable, specifically as to who would have this law called upon them and who has to enforce the law. That is: Who says who gets a “red flag” called, and, once called, what right of appeal does someone have once their guns are confiscated? Second amendment advocates are concerned public-safety intended laws could be used as petty, punitive acts.

Like campers around a campfire telling ghost stories, there was vivid discussion of the various, desperate lengths the state and federal government (or “The Federalies” as several justices of the peace called them) will go to take firearms away from residents of Cleburne County.

The state senate is working on similar legislation, but that could take days or weeks.

This ordinance, like a loaded .38 revolver under a pillow, was ready when the time came.

In other business, the legislative audit for the county was good, except it noted that in October 2019, the county was a victim of mobile-banking, checking-deposit fraud of $2,336.

The illegal action was noted and the funds were recovered that same month.

“I asked our auditor what we could have done to prevent this, and he said ‘Well, there’s nothing you could have done.’ We have to put it in your audit report, not because you did something wrong, but because it happened,” explained Pam Gray, Cleburne County Treasurer.

The jail committee is looking at expanding the current campus of the detention center, and the ambulance committee should have a proposal to present next month. The court also approved an $10,000 appropriation to help offset costs for reliable internet connectivity for the Cleburne County Courthouse.

Alex Kienlen, editor of the Van Buren County Democrat contributed to this article.

Partly cloudy skies in the morning will give way to cloudy skies during the afternoon. High 82F. Winds S at 5 to 10 mph.