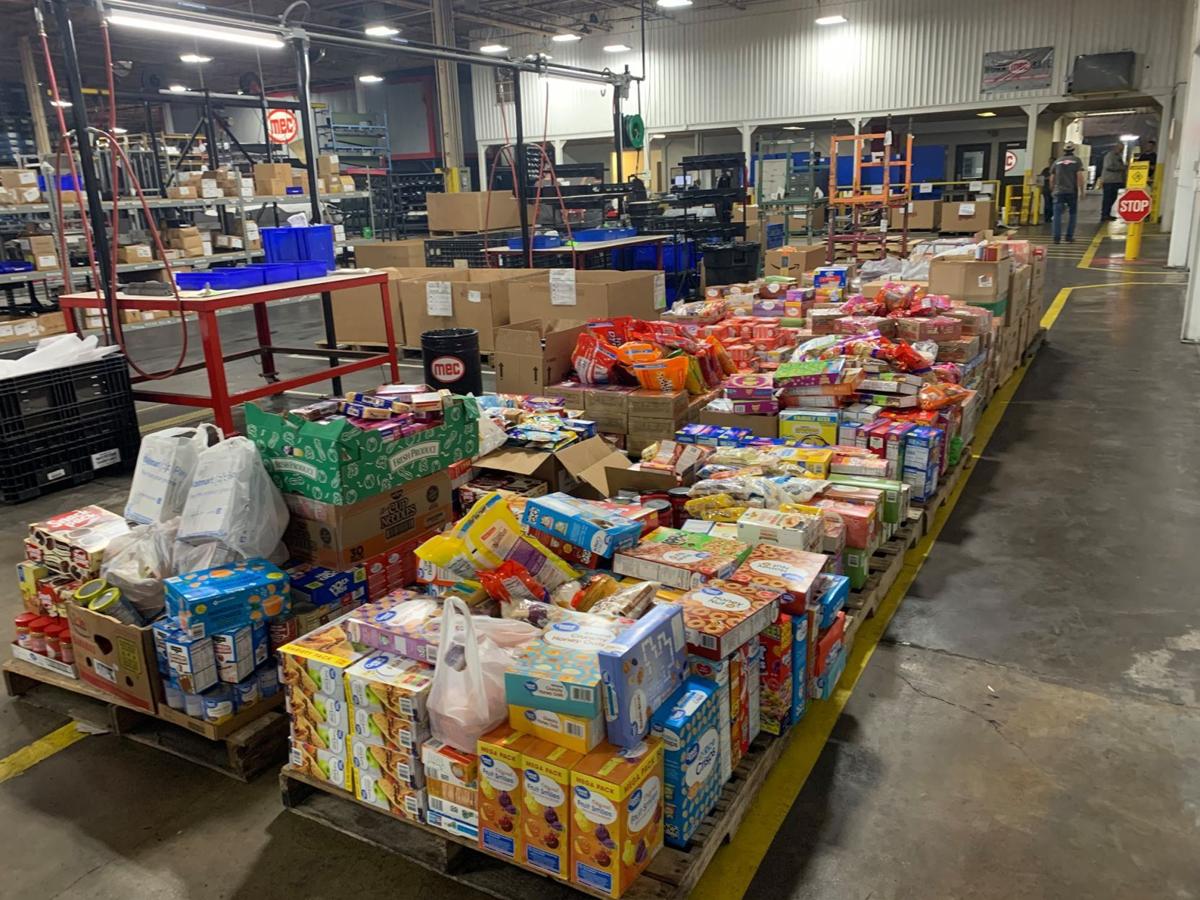 Pallets of food collected by workers at MEC in Heber Springs for the 501 Day food drive. 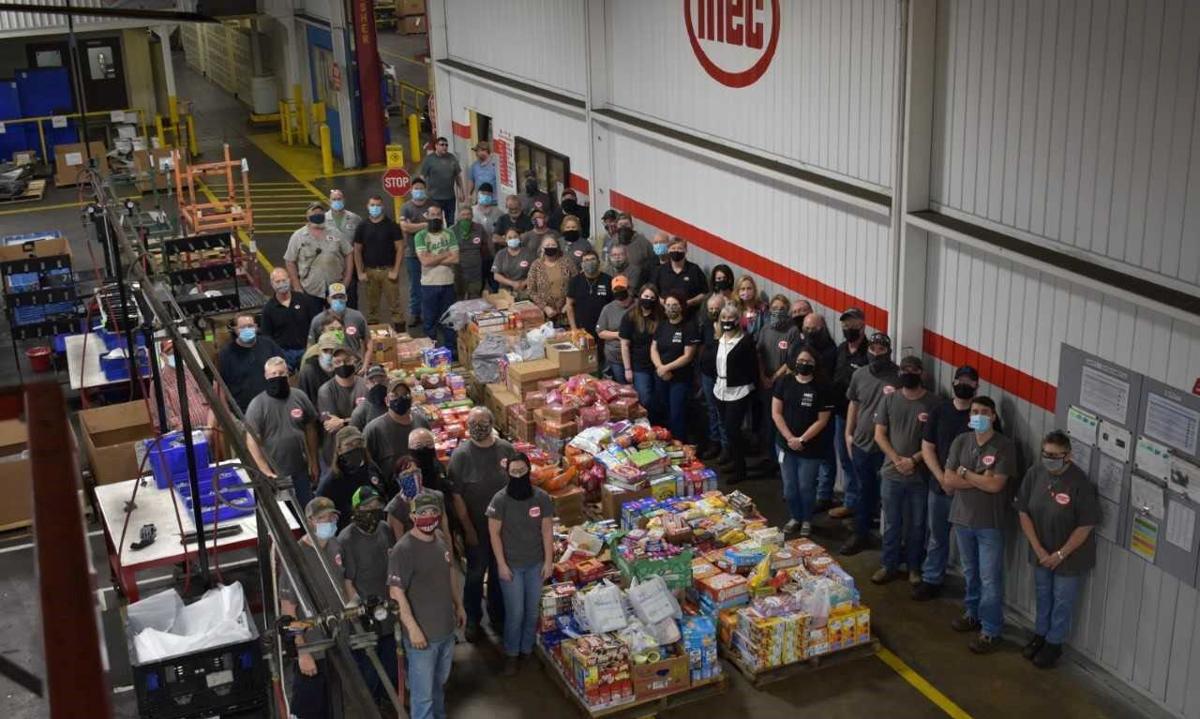 Pallets of food collected by workers at MEC in Heber Springs for the 501 Day food drive.

[Editor’s note: The Heber Springs Sun Times and its sister papers in central Arkansas collaborated on this effort. Both parts will look at statewide numbers and local efforts.]

On a sunny, but cold day towards the end of last year, there was a line of people from the National Guard armory out to S. Seventh Street. Curious, I asked a pleasant lady at the end of the line, if it was for COVID-testing.

Agreeing, we stood and chatted for a bit as the line slowly moved.

In April the USDA announced it will increase food assistance to low-income seniors by providing nearly $37 million in additional support to the Commodity Supplemental Food Program (CSFP) to provide nutritious, domestically-sourced USDA Foods to low-income persons 60 years or older.

A far cry from the food-box services that brings cremini mushrooms and perfectly portioned fire-roasted tomatoes in olive oil. These boxes are the real deal: Powdered milk, powdered egg, cheese, big silver can of peanut butter.

Commodity expansion along with similar actions in other nutrition programs including SNAP that serve this population, will help combat food insecurity among seniors by extending a 15 percent increase to SNAP benefits, and increasing fruit and vegetable vouchers in the Women, Infants and Children (WIC) program by $35 to better serve the 6.2 million people that use WIC.

The pandemic cramped food donation drives last year, but this year organizations are pulling out all the stops to help their neighbors.

Teams from Mayville Engineering Company, Inc. (MEC) in Heber Springs competed and collected 12,207 food items that will be distributed to local pantries to help those in need, as part of the Chamber of Commerce' 501 Day Food Drive.

When children get old enough to go to school, for many it becomes an escape from food insecurity. Last year school districts across the state had to create innovative ways to continue delivering meals to their students during the pandemic.

Heber Springs School District recently received a $500 donation from the Arkansas Hunger Relief Alliance’s No Kid Hungry campaign, which recognized the heroic efforts of school nutrition teams across the state, who worked hard to find solutions to provide nutritious meals to their students throughout the pandemic. The cash prizes were sponsored by Midwest Dairy Council.

Whether those meal deliveries took place in the classroom, in reconfigured school dining areas, through grab-and-go meals, multiple meal boxes, bus stop or even home deliveries, over 90 percent of Arkansas school districts managed to continue to provide this vital nutrition support to their kids beginning last March – compared to about 30 percent of districts nationwide, according to the Arkansas Department of Education.

One of the most widely known organizations in the fight against food insecurity in Arkansas is the Arkansas Foodbank. The organization used every space available in its massive, newly-opened 99,000 square-foot facility to accommodate social distancing and the increased inventory of food the bank received through government programs. Foodbank employees, 75 of them, took the role that volunteers would take in normal years – packing boxes and distributing them directly into the hands of hungry Arkansans.

A key part of the Foodbank’s focus was mobile distribution centers. MDCs, or loaded trucks full of boxed food which were taken to central points like the parking lots of stores and distributed to waiting families, jumped by a factor of 10 in 2020.

In 2020, 602 MDCs were organized compared to just 51 in 2019, Whitlock said. Foodbank Community Engagement Coordinator Daniel Frazier said the scale-up of MDCs was a “fight-or-flight” response to the coronavirus pandemic that will remain in place moving forward, albeit at a more manageable level.

Another key part of the Foodbank’s success in distributing so much food in 2020 was the governmental aid and assistance programs which supplied more food than usual to the Foodbank’s warehouse in Little Rock. In fact, Sanders said at one point in 2020, the warehouse’s inventory was 60 percent of food from governmental sources.

“[Federal programs] gave us the engine to distribute 40 million pounds of food [in 2020],” Sanders said.

The sheer volume of federal food aid the facility received in 2020 will surely lead to a drop in distribution in 2021, Sanders said. Accounting for the drop down to about 35 percent of the warehouse’s inventory coming from governmental sources, Sanders said the

Aspire Arkansas, a project of the Arkansas Community Foundation, defines and measures food insecurity as “the percentage of households that lack access, at times, to enough food for an active, healthy life for all household members and/or experience limited or uncertain availability of nutritionally adequate foods.”

Non-perishable food, as the name implies, can contain preservatives and are often highly processed and high in sodium. Think about the highest-priced non-perishable item at your local convenience store: beef jerky, and the cheapest non-perishable: ramen noodles.

The stigma around food insecurity has lessened over the years. Free lunch at public schools is now the norm, not an application quietly slipped in amongst the stack of start-of-school paperwork. Instead of an embarrassingly bulky book of food stamps holding up the checkout line, SNAP benefits are now loaded on a discreet card for swiping. Ask most recipients about how they utilize food benefits and the answers will be judicial and fairly pedestrian. Most try to make it go as far as possible each month, while many bolster their shelves with whatever they can glean from a church Blessing Box or food pantry. Think less of urban grifters, and more of the rural granny who eats after everyone else, and will go without in order to give the grandchildren treats.

Every little bit helps after all.

A mix of clouds and sun early followed by cloudy skies this afternoon. High 78F. Winds SE at 5 to 10 mph.

A few clouds. Low near 60F. Winds light and variable.

Partly cloudy skies in the morning will give way to cloudy skies during the afternoon. High 82F. Winds S at 5 to 10 mph.