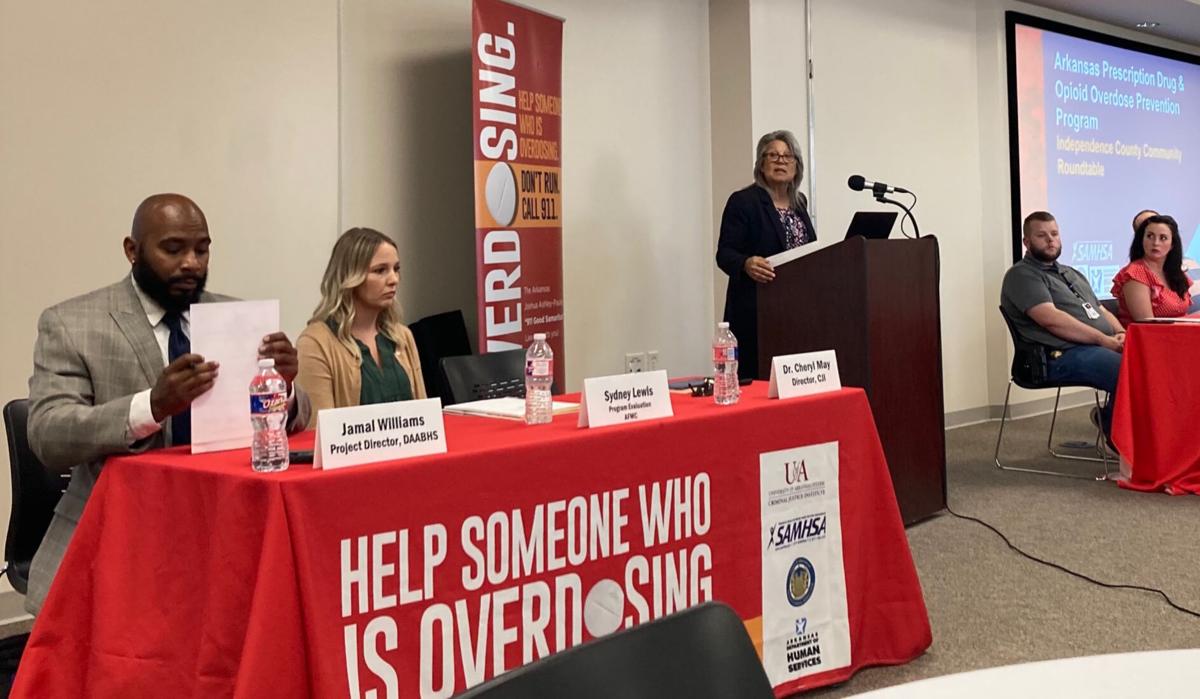 Dr. Cheryl May, Director of the Criminal Justice Institute at the University of Arkansas, speaks abut the driving issues and possible solutions to opioid overdoses in Independence County. 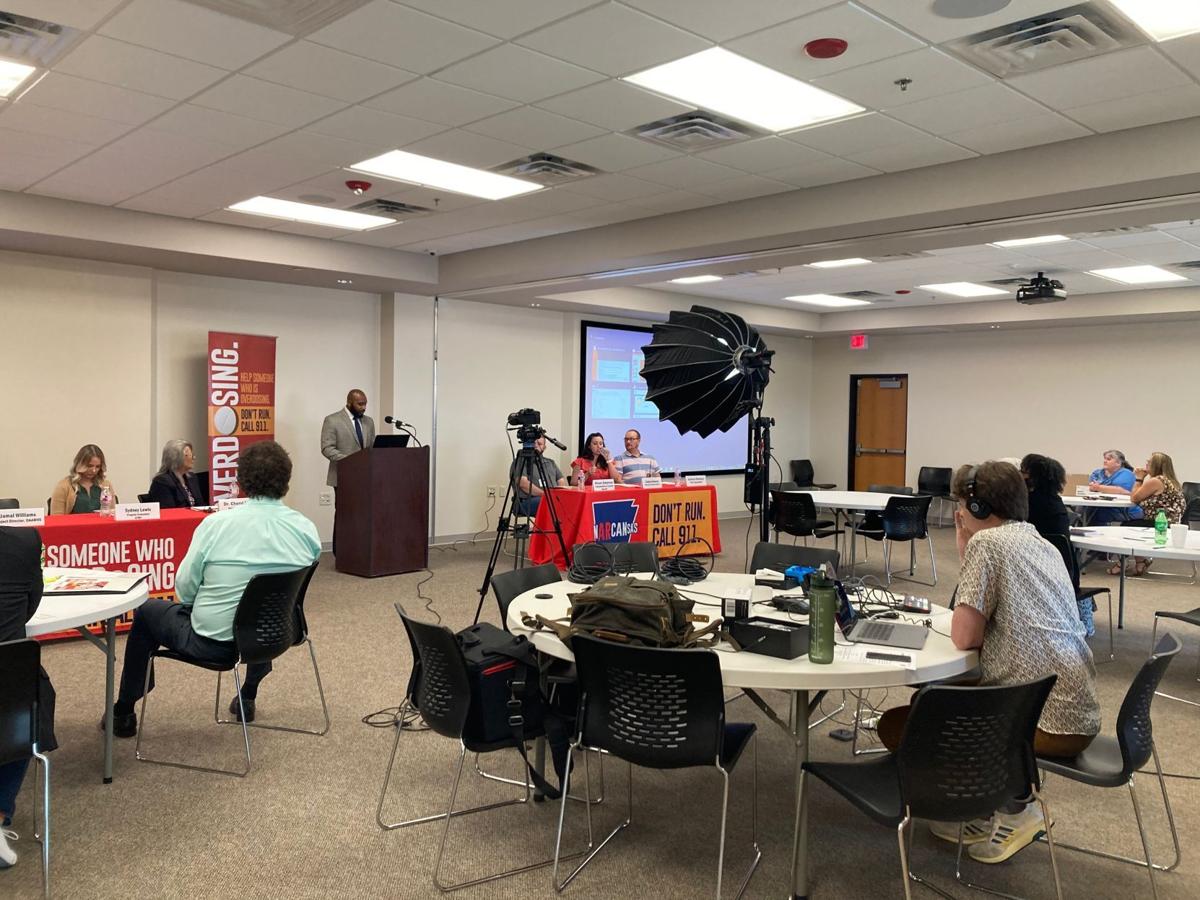 Jamal Williams with the Arkansas Department of Human Services, Division of Aging Adult and Behavioral Health Sciences issues a call to action during a community discussion about opioid overdose prevention in Independence County.

Dr. Cheryl May, Director of the Criminal Justice Institute at the University of Arkansas, speaks abut the driving issues and possible solutions to opioid overdoses in Independence County.

Jamal Williams with the Arkansas Department of Human Services, Division of Aging Adult and Behavioral Health Sciences issues a call to action during a community discussion about opioid overdose prevention in Independence County.

On the 50th anniversary of President Richard M. Nixon’s “War on Drugs,” Dr. Cheryl May, director of the Criminal Justice Institute at the University of Arkansas led a passionate community roundtable about opioid overdose prevention.

May’s message to the group gathered at the Batesville Community and Aquatics Center was clear.

If communities want to get control of this extremely broad phenomenon of opioid overdoses, they need to de-stigmatize it, and start talking about it. Tracking the opioid-overdose epidemic in rural Arkansas is difficult because opioid overdose death data may not be accurately recorded in rural areas, for example, an overdose death might be filed as “cardiac arrest” by a county coroner. According to the Arkansas Foundation for Medical Care, between 2018 to 2020, there were 27 reported overdoses in Independence County.

People need to get rid of the notion that opioid abuse is something that just happens to homeless people living under an overpass in the inner-city. There are no socio-economic boundaries. Addiction starts with people seeking a cure for pain. It’s the star athlete who gets injured, the blue-collar factory worker who has to stand all day, the senior with the bad hip, the store clerk who has to lift boxes, the office worker getting dental work done.

The problem is most of the cheap opioids are now tainted with fentanyl.

In its fine-powder form, the drug is so potent, a sweetener-packet sized amount could kill more than 100 people. Pharmaceutical fentanyl is a synthetic opioid, approved for treating severe pain, typically advanced cancer pain. It is 50 to 100 times more potent than morphine. The painkiller is typically compounded and dispensed by pharmacists in a diluted manner in sprays, patches, dissolving tablets, or lozenges, for cancer patients.

The Arkansas Naloxone Project has helped save the lives of 1,020 Arkansans so far.

One of the most recent examples May cited was “a 2-year-old who got into mom’s Percocet” and a West Memphis police officer who became ill after accidentally touching something contaminated with fentanyl powder.

Naloxone or Narcan, is available for purchase at most pharmacies and you have to ask for it.

The 4 mg nasal spray is easy to administer. May explained it knocks the opioid off the brain receptors for 60-90 minutes, which may help someone start breathing again, but follow-up medical care is needed. Each dose of Naloxone/Narcam comes with PPE and instructions (including an app) to walk someone through the process.

Arkansas is one of the 40 states exercising the Joshua Ashley-Pauley Act “Good Samaritan” law, which encourages people to seek out medical attention for an overdosing person and for follow-up medical care after has been administered. These laws provide immunity from arrest, charge or prosecution for certain controlled substance possession and paraphernalia offenses when a person who is either experiencing an opiate-related overdose or observing calls 911 for assistance or seeks medical attention.

Josh Ramsey is the peer recovery support specialist for the 16th Judicial District Task Force. He connects with people and their friends and families during overdose events.

Recovery programs want participants to be detoxed, but substance abuse disorder isn’t something people can just quit. It changes the body’s chemistry.

Detoxing is a physically painful process that can include vomiting and diarrhea. Medically assisted treatment (MAT) is becoming more accepted to help people with the process. White River Medical Center just opened a four-bed unit for medical detox.

Then there’s the mental and emotional rebuilding. Ramsey said after he quit using, he had about a year of drug-induced psychosis for nearly a year. As a peer recovery support specialist, he helps users make a recovery plan, acts as a liaison for court proceedings, helps them rebuild life skills, get their driver’s license back, get their children back, and, perhaps most important, advocates for their treatment. The recovery plans aren’t simple and it takes several years for most people.

Just having a peer recovery specialist is remarkable.

Ramsey received a standing ovation for his work.

“That’s groundbreaking to be able to hand them a card of someone to talk to,” said Geoffrey Watts, Commander of the 16th Judicial District Task Force.

Community members can expect to see more Narcan training being offered to groups throughout the county, as healthcare workers and law enforcement work to get their arms around this growing epidemic, because it’s going to take more than just arresting people.

According to the Arkansas Foundation for Medical Care, the following offer treatment options in Independence County.