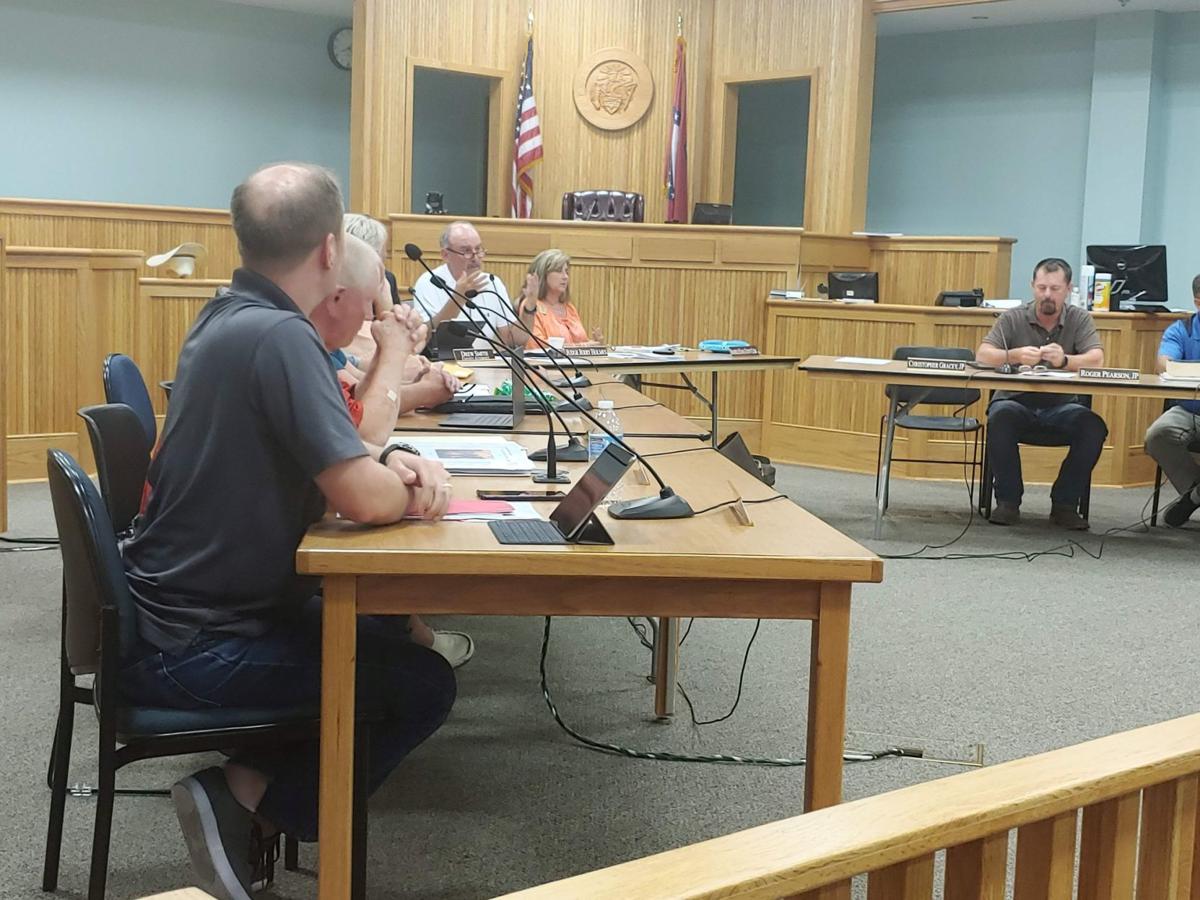 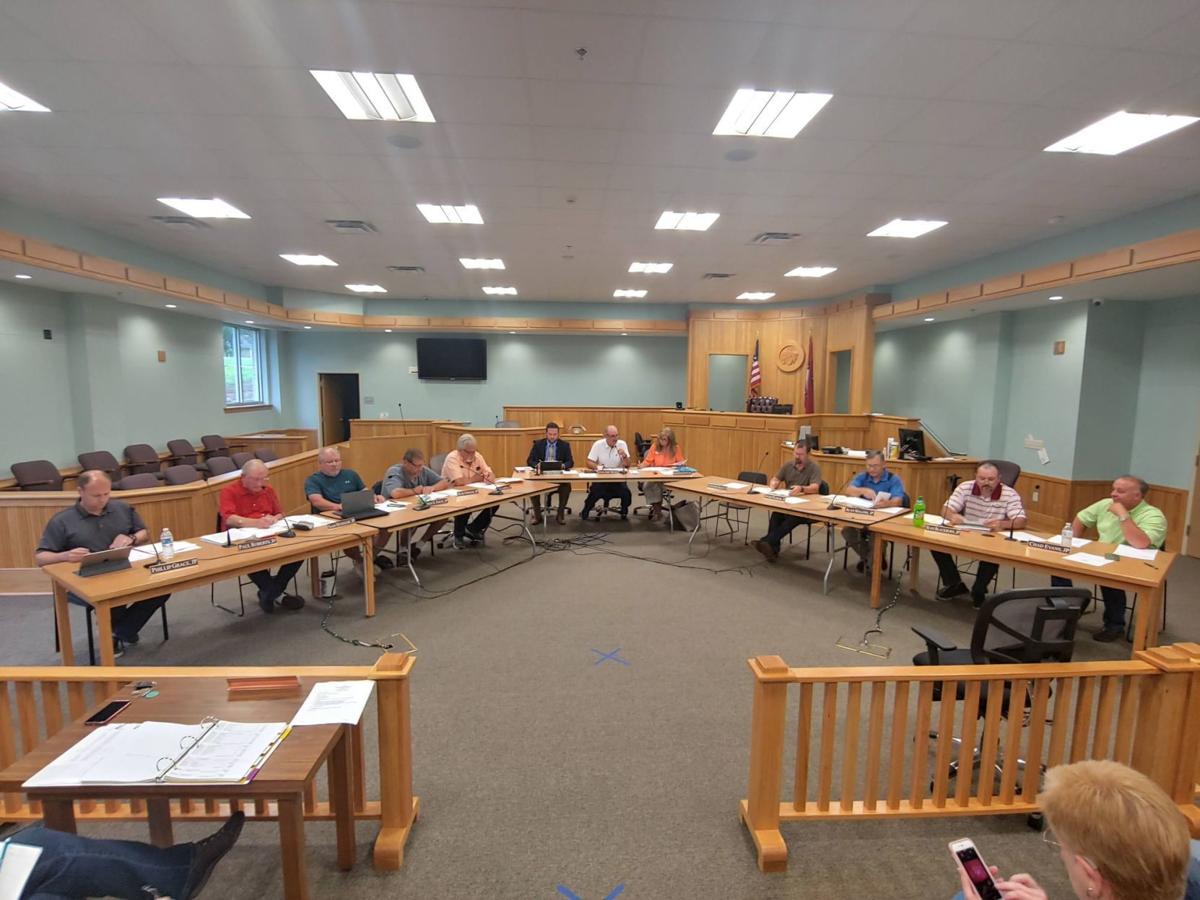 An expected discussion on improvements to or replacement of the current jail was delayed as the Jail Committee was “still working the numbers,” committee head Justice Chad Evans said.

The ambulance discussion, while at the last of the meeting, took up the most time as a single issue as Justice Sean Blackburn presented concerns about the appropriate operation of Survival Flight ambulance service as a county-wide provider.

Blackburn read into the record laws regarding ambulance operation in Arkansas, as well as the text of email exchanges between himself and Arkansas Health Department, which is the responsible agency for ambulance operation, and communications between Survival Flight ambulance service and that department. Included in his reading was four complaints about Survival Flight response filed with the Department of Health from Tumbling Shoals.

(The awarding of the ambulance franchise to Survival Flight by Heber Springs City Council, ending the franchise of prior provider Northstar EMS, created series of fraught discussions in city and county government at the time, ending with a special election which ultimately supported Survival Flight’s being granted the franchise.)

The problem, Blackburn told the court, was that in signing the mutual aid for the entire county, Survival Flight became the ambulance provider for the entire county and was required to respond to all ambulance calls. The mutual aid agreement between the county and Survival Flight has the service responding to critical care requests. A list of those requests, such as heart attacks, strokes, serious auto accidents, were part of the mutual aid agreement.

Non critical care requests, such as helping somebody up after a minor fall, would remain to be handled by the various volunteer ambulance services in the county under this agreement.

Blackburn asserted that by state law there should be no division and the current agreement, of Survival Flight for critical care and volunteer services for other calls, was against the law.

The ensuring discussion among justices included an assertion that the complaints and concerns about law breaking was “B.S.” as one justice asserted.

Blackburn demurred strongly to this assertion.

Several in both the gallery and among justices implied that the core of the issue was a Northstar EMS employee who was at the time head of the Tumbling Shoals volunteer ambulance service.

He pointed at Michaels, seated nearby, as he stated this, and Michaels did not respond.

Holmes said his office has “reached out” several times in an effort to reconcile between Tumbling Shoals and Survival Flight but had gotten no response from Tumbling Shoals.

A third reading was made of an ordnance which would allow Cove Creek/Pearson fire dues to be placed on property tax statements for that community.

The issue was brought to the court after the volunteer fire department accumulated enough signatures to bring the matter before the court as an ordinance. While the ordinance ultimately passed, at issue were two components, one, led by Justice Alan Malone, was that the dues would become a tax under this circumstance.

In light of this being a de facto tax was that it should be a matter for general election was an assertion by Justice Roger Pearson, who was joined by others in this opinion.

As the debate continued, Cleburne County Attorney Drew Smith said under current law the court must approve the fire dues inclusion due to recent changes in state law. Failing to pass it could result in the matter going to court, Smith said.

A vacancy was declared as District 7 Justice Christopher Gracy has moved out of his district. Justice Phil Grace, who is also expected to resign from the court shortly due to a move, explained to the gallery that the traditional process is for nominees to assume a justice’s seat are presented to the county judge and forwarded to the governor for appointment. Once appointed for a vacant seat, that person is not eligible to run for election for that seat.

An ordinance passed supporting the city’s role as a pass-through in handling the money provided by a FEMA grant to elevate a house on Mossy Shoals Circle in Pangburn. The grant will cover 75 percent of the cost, with the home owner paying the remaining 25 percent, expected to be a rough total of $137,845.

A youth fishing tournament will take place Oct. 3, Justice Blackburn announced, and will award a place on the Willie Stone Cup to the winner. Donations are currently being taken, and volunteers are welcome, Blackburn said.

Variable clouds with scattered thunderstorms. A few storms may be severe. High 91F. Winds WSW at 5 to 10 mph. Chance of rain 60%.