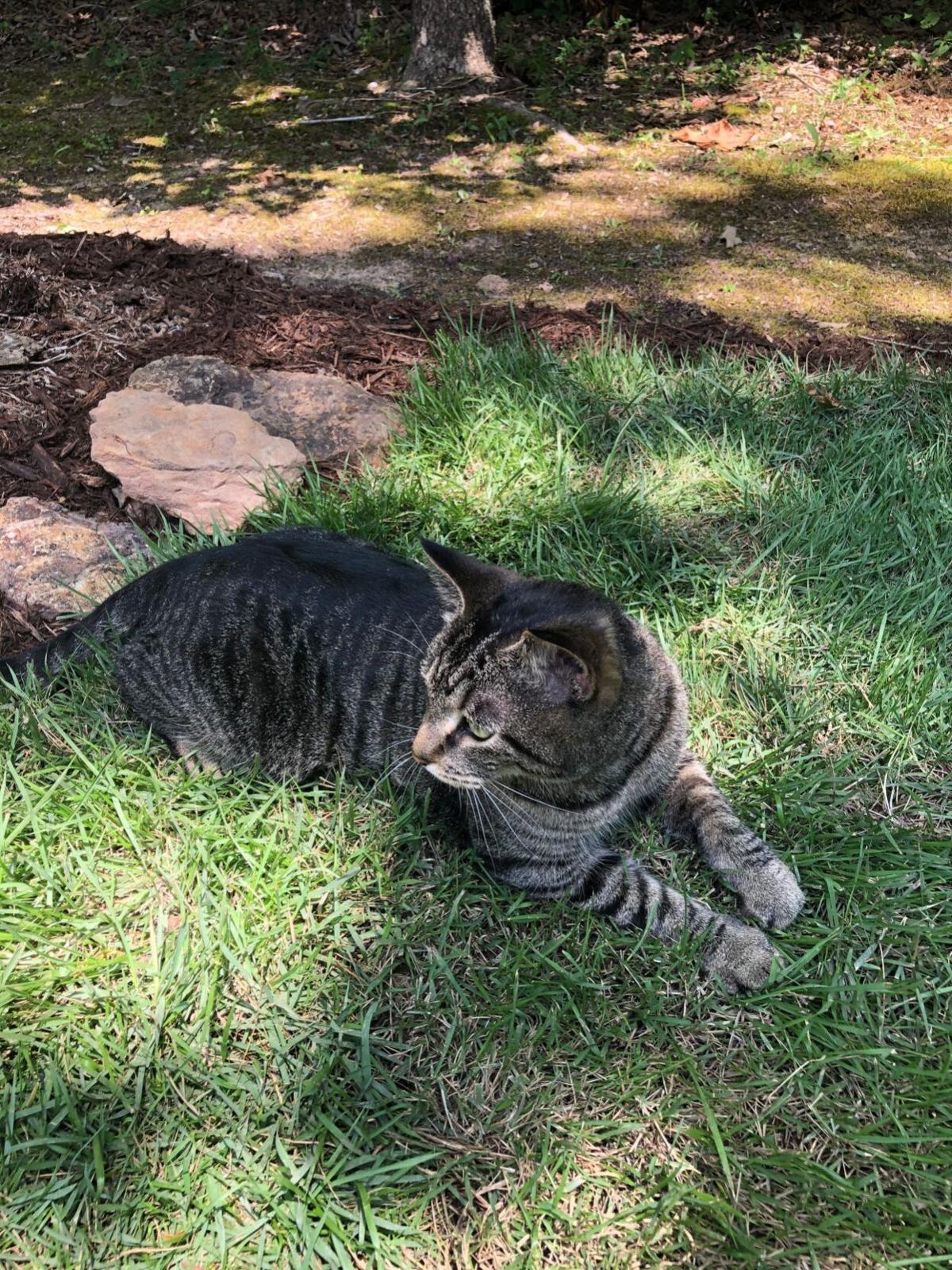 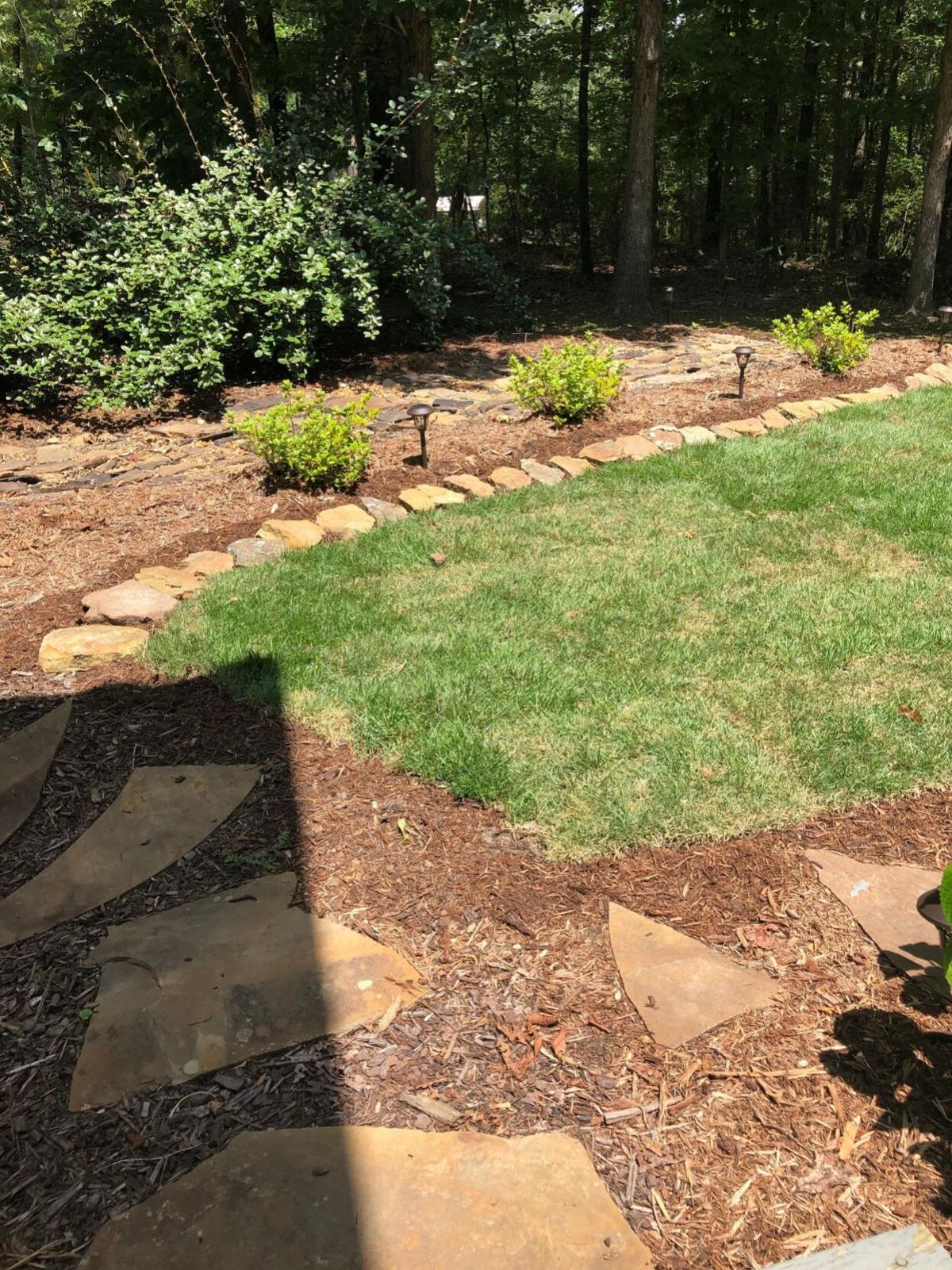 Well, time is moving quickly, and summer will be nearing the end before you know it! I’ve had a great time chasing lizards around the place while the Old Couple have been landscaping. Of course the Old Woman has been dreaming of new flower beds, and the Old Man sometimes dreads all of her creative endeavors! He usually ends up doing most of the work! This summer though they are spending more time working together because of the flower beds and landscaped riverbed are being surrounded by rocks!

These two old people get up early before the heat gets unbearable, and they head to a grove of trees on the edge of the field. (They don’t forget to put on Avon insect repellent and watch for poison ivy and poison oak!) Here under the trees are piles of rocks of all sizes. Now the Old Woman knew the location because these rocks had quite a story from the past. She would be sure to share this story with me when we were sitting under the fan resting!

Now the Old Woman has three siblings – one older sister and two younger brothers. Growing up the Old Woman and her sister did household chores which kept them occupied and out of trouble MOST of the time. But – the two brothers got into quite a bit of mischief! They were five years apart which made aggravation of each other end up in fights. Their mother and father were hard working and didn’t have time or patience to put up with a lot of nonsense from any of their children. Sometimes their dad used his belt or a switch, but one day he decided a different means of discipline. He told those two sons the paddlings hurt him more than they hurt them. Now the boys had a hard time believing that. Perhaps someday they would understand. After that, most punishments were extra chores.

If their dad was away from home working on a building project, the Old Woman’s brothers tried to take advantage of their mother. This usually backfired because she had a long row of shrubs that was full of weeds and grass with no shade trees. This was the dreaded punishment – weeding the shrub bed ! They couldn’t pull the grass up! They had to dig the grass and weeds up! But when their dad was around the job that paid off in the long run was picking up rocks from the fields. If it was a minor infraction they might have to pick one to three wheelbarrows full of rocks. If they were full-fledged fighting they might get six loads. Now one fear the boys had was something being under the rocks when they pulled them up! Occasionally they would discover a snake or tarantula! Their dad checked to see if the rock piles seemed to be growing! The brothers were pretty honest about their loads, but they learned the larger the rocks the less rocks it took to fill up the wheelbarrow.

This punishment began when they were five and ten years old. Over the course of six years they cleared around 100 acres of pastureland! During these years the neighbors noticed that old wheelbarrow being pushed up and down the field’s terraces by a tall, thin, dark haired boy and a shorter, thin, blond boy who would be putting rocks in that old wheelbarrow! The Old Woman said those two boys grew up to be two hard working Christian men. They have remained very close brothers and friends. I think that rock gathering might have had something to do with how they turned out. Do you agree?

I bet you guessed where they piled all those rocks. Yep you’re right! Under the trees where the Old Man and Woman were gathering rocks for their landscaping! That couple got pretty excited when they found a large rock that could be a stepping stone, but they used all sizes and shapes of rocks in our yard. (It doesn’t take a lot to excite them!) This summer alone I’m thinking they brought around a thousand rocks to the yard of our farmhouse! The Old Woman only got one small patch of poison oak, a few ticks, but no snakes or tarantulas! It was worth all those inconveniences because they were both proud of the rocks around their yard! They also enjoyed seeing that cleared field after the hay had been baled. I’ll have to say that, in my opinion, discipline definitely mattered!