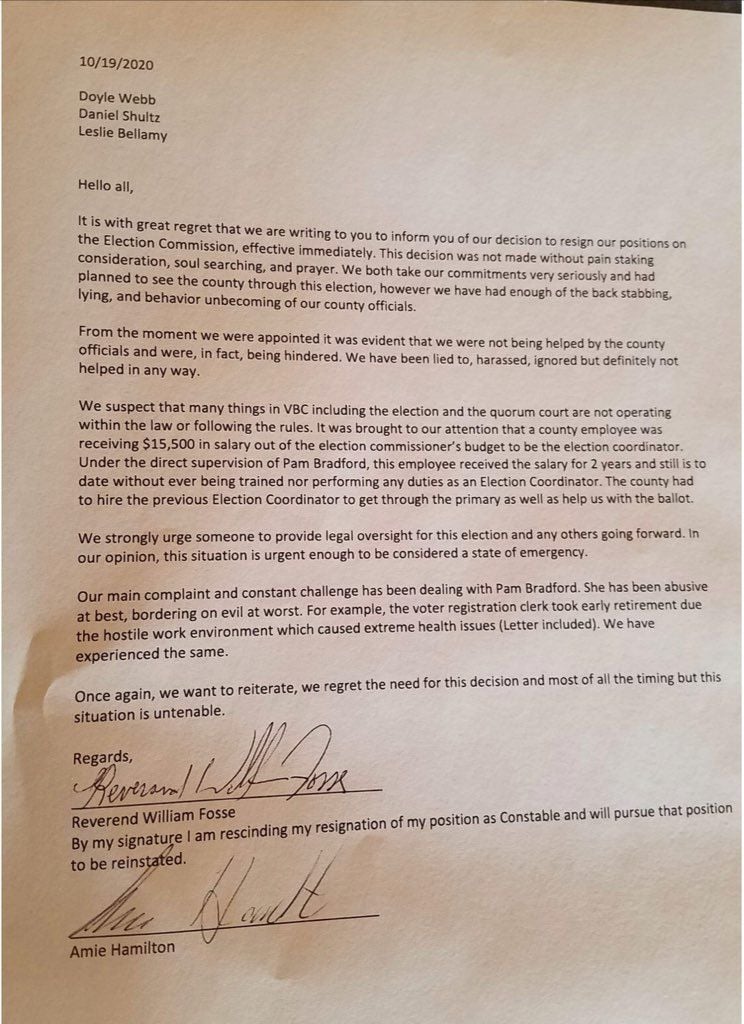 The letter of resignation submitted to James Oct. 19.

Vicki A. Jones, with voter registration, presenting her resignation letter to the Quorum Court at Thursday’s meeting.

The letter of resignation submitted to James Oct. 19.

Vicki A. Jones, with voter registration, presenting her resignation letter to the Quorum Court at Thursday’s meeting.

CLINTON, Ark. (Oct. 19, 2020) – In an unexpected development, two of the three members of the Van Buren County Election Commission resigned today, the first day of early voting in Arkansas.

The letter of resignation was delivered to Van Buren County Judge Dale James, and at least one other, via Facebook Messenger, as a picture of a type-written letter signed by two members of the commission: Rev. Will Fosse and Amie Hamilton.

Fosse and Hamilton were appointed to the commission after the earlier commissioners resigned. Those resignations followed a Van Buren County Quorum Court meeting in February where justices heard the commission had spent its 2020 budget in those first two months of the year.

The resignations are not expected to impact local elections, James said.

“We are going to have a good-quality smooth election no matter what it takes,” James said. “The Van Buren County election will be one the voters will be proud of.”

Van Buren County Clerk Pam Bradford also did not think the loss of the commissioners would impact election performance.

“It really doesn’t impact us in any way because they [Fosse and Hamilton] haven’t been any help,” Bradford said.

Bradford said she had to set up the machines for Monday’s early voting Sunday, with help from now remaining election commission member Phillip Ellis, Bradford said.

Ellis said early voting in the county was going well with, at 4 p.m., over 600 having cast ballots, a number confirmed by Bradford. The resignations had not interfered with election operations, Ellis said. One factor in the uninterrupted performance was that poll workers had already been trained, he said.

The question, Ellis said, was how the election would be certified – one of the duties of the election commission.

State Board of Election Commissioners David Shults said Monday afternoon he had already been on the phone with Arkansas Republican Party head Doyle Webb about appointing a Van Buren County-registered voter to the commission in order to assure certification.

A single-person commission for certification was not possible, Shults said, adding that Webb assured the appointment would be made in time for certification. At least one additional person would need to be appointed to the Van Buren County commission, he said.

The election commission is typically three-person, based upon the political party in power at the time, with the majority party, in this case Republican, appointing the commission head and one other person, the remaining seat to a member appointed by the county Democratic party.

The county’s Republican party had been disbanded earlier in the year, with county operations being taken over by the state party, headed by Webb.

The Oct. 19 letter over Fosse and Hamilton’s signatures state: “From the moment we were appointed it was evident that we were not being helped by the county officials and were, in fact, hindered. We have been lied to, harassed, ignored but definitely not helped in any way.”

The letter continues to “... urge someone to provide legal oversight for this election and others going forward....” citing “... the election and the quorum court are not operating within the law or following the rules.”

The letter continues that “... under the direct supervision of [Van Buren County Clerk] Pam Bradford...” salary for election coordinator had been misused.

In the Quorum Court’s monthly meeting Thursday night, Oct. 15, former Circuit Clerk and Justice Esther Bass spoke regarding the election commission salary and the money which had been appropriated for Election Coordinator in 2019.

This led to an exchange between Bass and Bradford, where Bradford told Bass she had heard of him “asking questions” around the office about her office operations.

Bass stated the money, which had been appropriated in 2019 under ordinance 2019-03 was for an Election Coordinator, implying that Bradford had misused the funds.

Bradford said later the ordinance had granted the funding, which had come from her department’s funds, and she was using half of it to pay for an employee who was going to help with election duties. It was about this time that she noticed the then-Election Commission was draining its budget quickly and she had the money, through Quorum Court vote, transferred by court vote back into her office’s budget and away from the election commission after the ordinance had been passed.

Meanwhile the employee she had planned on using for election duties had gotten sick, and the duties were transferred to a second employee, Bradford said.

The Quorum Court exchange between Bass and Bradford, with some comments from the gallery (which led to James making a call to order at one point) ended when Justice Dell Holt said “I see this as more of a personal grievance.”

It was not the end of election discussion at the Quorum Court that evening.

After James gaveled the discussion closed, Van Buren County Voter Registration head Vicki Jones presented a letter to the court, which she read aloud to the court, announcing her resignation effective Nov. 2.

Bradford responded briefly, stating there were performance issues and “... it’s time for her [Jones] to go.”

James again gaveled, stating it was a Quorum Court meeting and not a grievance hearing. This was reiterated by county attorney Carol Crews.

Then a third point of the meeting, an ordinance regarding election commissioner training, which created the most broad discussion.

Fosse, seated in the front of the room, said the commission needed the training as it was in its position without knowing what had to be done or how to do it.

Justice Brian Tatum asked why the commission had taken the training, incurring the cost, without asking the Quorum Court for funding first.

As the discussion unfolded, then-commission head Hamilton told the court she had not been trained since the training facility required mask wear.

“The problem that we have is money was spent without asking,” Brown said. “Nobody’s against you.” Then “Please don’t feel like anybody’s attacking you.”

The ordinance for training monies passed.

In the Oct. 19 letter, Fosse states under his signature: “By my signature I am rescinding my resignation of my position as Constable and will pursue that position to be reinstated.”

Partly cloudy skies in the morning will give way to cloudy skies during the afternoon. A stray shower or thunderstorm is possible. High 61F. Winds SSE at 5 to 10 mph.