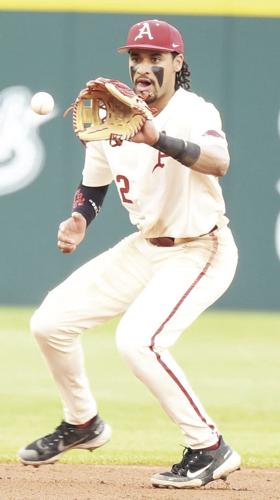 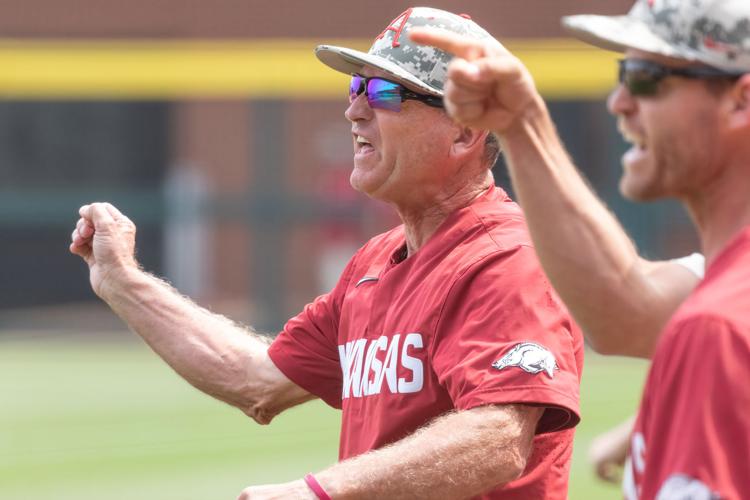 Coaches Dave Van Horn and Matt Hobbs have a word with the umpires after Sunday afternoon’s win at Baum-Walker Stadium in Fayetteville.

Coaches Dave Van Horn and Matt Hobbs have a word with the umpires after Sunday afternoon’s win at Baum-Walker Stadium in Fayetteville.

FAYETTEVILLE — No. 5 Arkansas got a pair of two-run home runs on Sunday to sneak past Ole Miss 4-3 and take the series in Baum-Walker Stadium.

For Arkansas it was the 12th consecutive SEC home series they have won, but it took some clutch hitting on both Saturday and Sunday to pull it off. Ole Miss won the series opener 4-2 on Friday night. On Sunday, both Chris Lanzilli and Michael Turner hit two-run home runs to allow the Razorbacks to win. Dave Van Horn was pleased to survive a close game Sunday.

“Bottom line, man, we got a win,” Van Horn said. “That was our ultimate goal today, was to win the series. We had two big swings with two outs. Two two-run homers. Lined out a couple of times. We just flipped 10 hits around basically. Eight other hits. We couldn’t string them together, but our pitching staff did a great job and there’s the defense again.”

On Sunday after Ole Miss jumped out to a 1-0 lead in the top of the first the Razorbacks responded in the bottom of the third. Cayden Wallace doubled to right field to start the inning. After a strikeout, Chris Lanzilli hit a Derek Diamond pitch over the fence for a 2-1 lead.

However, the Rebels struck back in the top of the fourth to go on top 3-2. That was all for Jaxon Wiggins and Taylor came in and shut the Rebels down.

“Wiggins, he just didn’t throw the ball over the plate enough, and they were getting geared up and Morris came in and gave us three full innings, counting the one in relief, and then two more,” Van Horn said. “Mixing it up a little bit, enticing a couple of ground ball double plays, I think.”

In the bottom of the fifth, Lanzilli reached on an infield hit. Michael Turner followed and put one over the fence in right field to close out the scoring for the game.

The Hogs and Tygart had to survive a ninth inning when the Rebels loaded the bases all on walks. Tygart got Ole Miss’ Tim Elko to fly out to center field with the bases loaded to end the game. Van Horn wasn’t pleased with some of the calls by the home plate umpire on Sunday in that ninth inning.

“Then Tygart just threw outstanding in my opinion,” Van Horn said. “It says he walked four there. I don’t know if I’m buying that. I’m going to look at some information. I just know what I’ve been told by people. I’m off to the side. You guys have a better view than I do. But it was something else.”

Regardless of what Van Horn thought of the calls, what was the mood in the dugout when the Rebels had the bases loaded and Elko, who Tygart retired three times in the series, at the plate?

“The mood in the dugout was obviously a little bit nervous,” Van Horn said. “We had even talked earlier, before the inning started, if Elko got up, were we going to leave him (Tygart). I told Coach (Matt) Hobbs depending on what was going on, what was the score. There’s no way we could have taken him out there. We didn’t feel like he was pitching that bad. We just feel like he got squeezed big time. What a great job, what a great effort to finish that game.

“That was our game plan. We were thinking he could give us 50, 55 pitches. He ended up throwing 70. Unfortunately, I think he threw 15 more than he probably had to, but that’s what it ended up being.”

The Hogs turned three double plays on Sunday which proved to be big for Morris and the Hogs.

“When I go in to pitch, I’m not worried about striking out people,” Morris said. “I just want to get ground balls. All of the outings that I have, if you look at them, there’s a lot of double plays turned. And I know Robert (Moore), Jalen (Battles), there’s nothing better than them two. Just knowing you got those two behind you, it just makes it a whole lot better when you’re pitching.”

Ole Miss took the opener over Connor Noland and the Hogs 4-2. The Rebels had 11 hits on Friday to eight for the Razorbacks. Elko, Justin Bench and Kevin Graham led the charge on offense with each getting two hits. Graham also knocked in a pair of runs.

On Saturday night, it appeared the game was headed to extra innings. The score was tied at 3 with one out in the bottom of the ninth. Jace Bohrofen reached on a single and then Braydon Webb walked. That brought Kendall Diggs to the plate. Diggs doesn’t usually play on weekends, but he got the start at designated hitter. He was hitless in three previous at bats. However, Diggs worked the count to 3-2 before hitting a Jack Dougherty pitch well over the fence in right field for a walk off 6-3 victory.

An excited Diggs was more than willing to talk about his home run.

“First pitch, he went curveball, which I didn’t see in my previous at-bat,” Diggs said. “I don’t think so at least. It was pretty good pitch. It was definitely a strike. Ball after that. Another curveball, obviously, the check swing. So obviously got two strikes, stepped out, took a deep breath. Obviously, there’s a lot going on, it’s a big stage, but just trying to tell myself positive things.”