You have permission to edit this article.
Edit
Home
News
Sports
Obituaries
Local Events
e-Edition
Classifieds
Share This
1 of 5 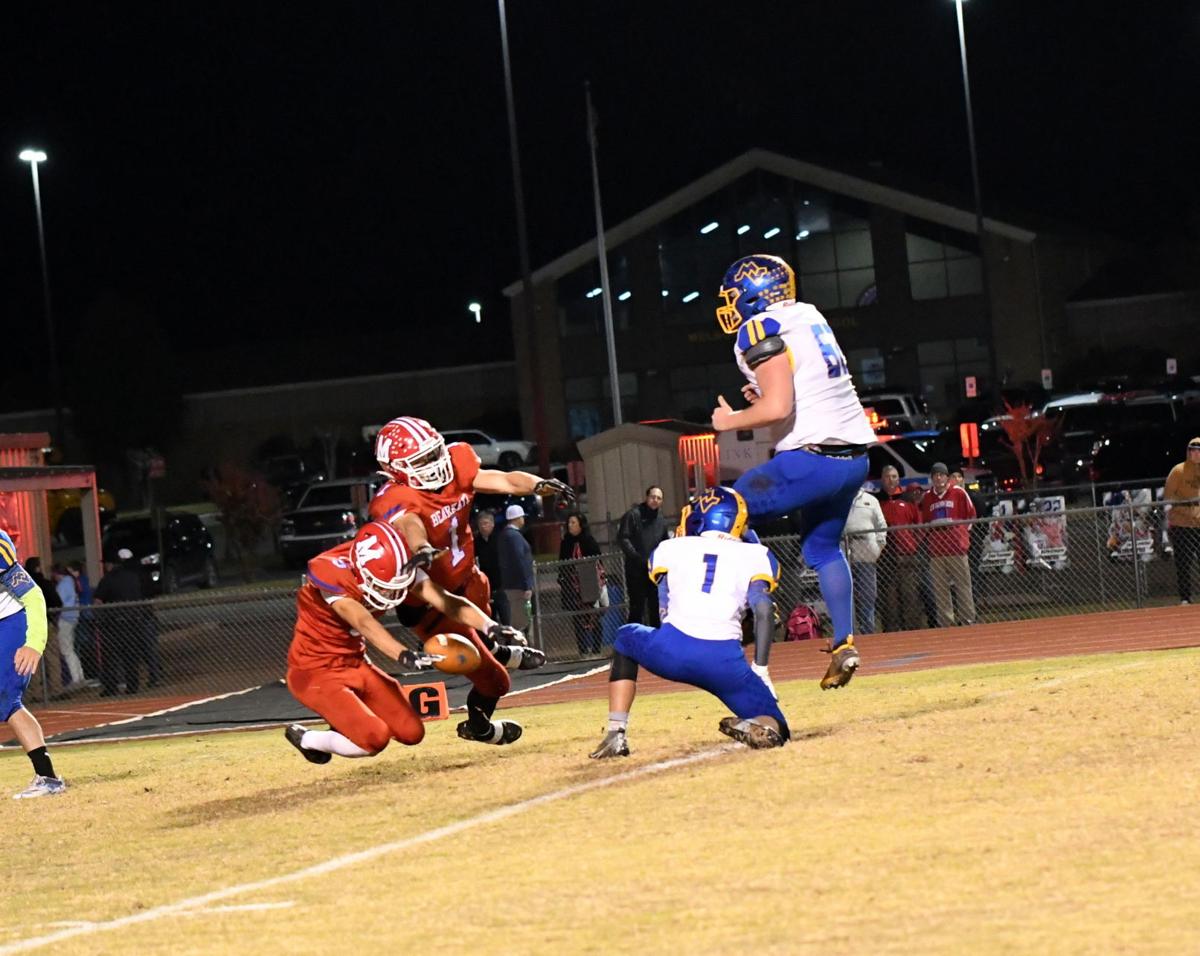 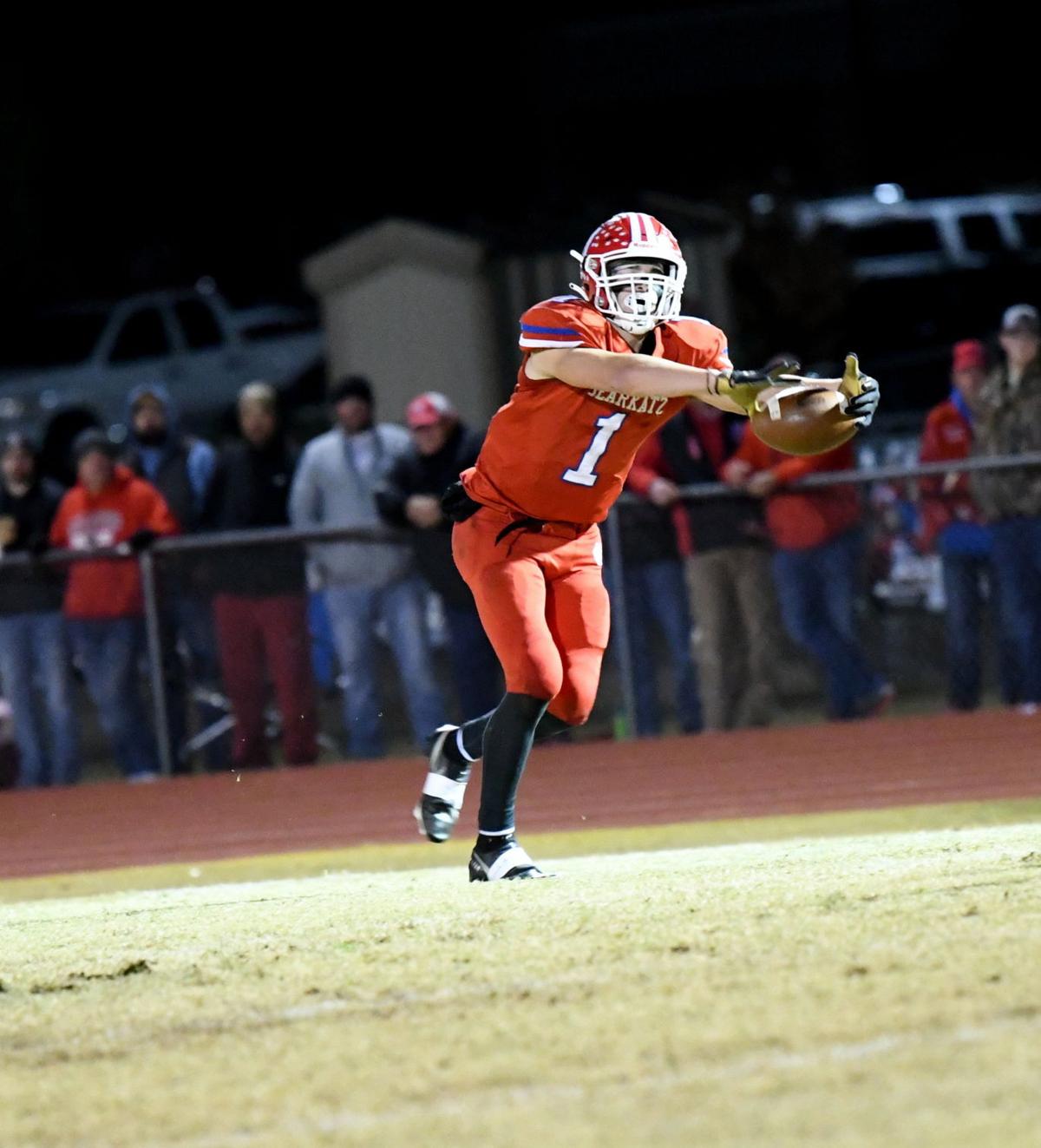 Carter Bray reaches out the ball on a touchdown run. 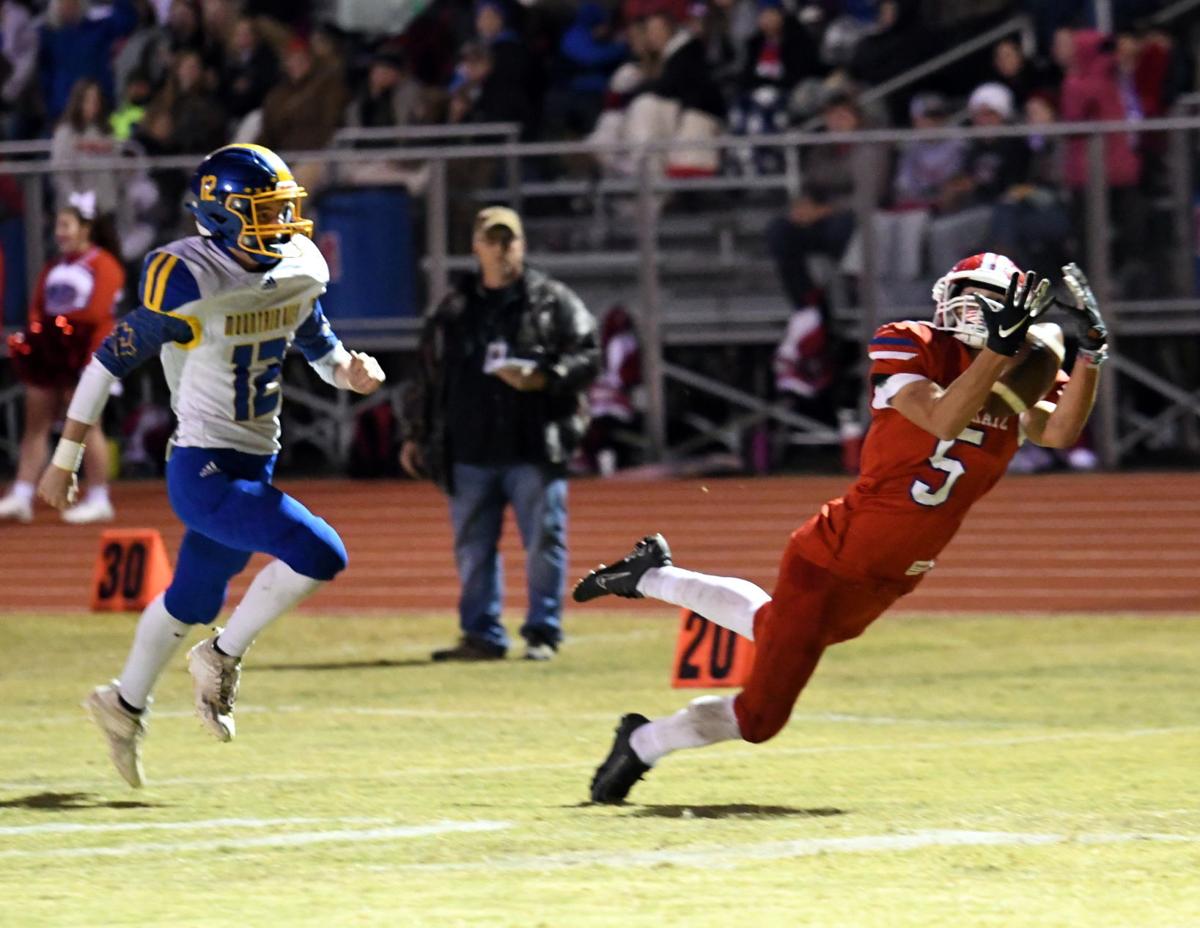 Malachi Cruz makes a catch for the Bearkatz. 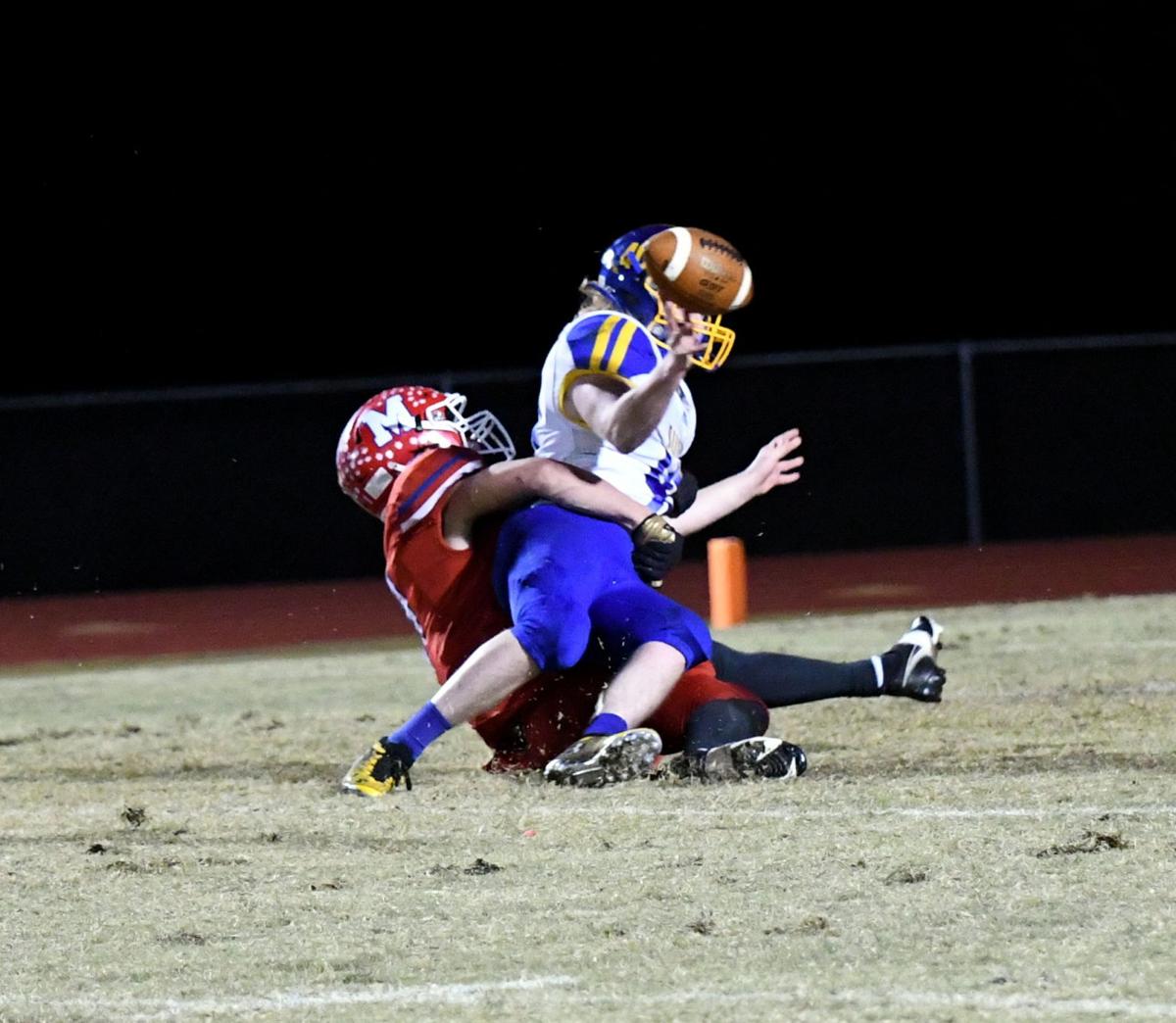 Carter Bray reaches out the ball on a touchdown run.

Malachi Cruz makes a catch for the Bearkatz.

MELBOURNE — When Mountain View’s punter Joseph Rentz tried to recover a high snap on fourth down, but was hit and spun around by Dakota Townsley and the ball flew out of Rentz’ hands into the endzone where Nathan Woodall recovered it for a Melbourne Bearkatz go-ahead touchdown two plays into the fourth quarter of Friday’s rivalry 2-3A conference finale.

“I was proud of the way the kids played and didn’t give up,” Melbourne head football coach Casey Moreland said. “We tried to shoot ourselves in the foot there for a minute with the penalties, but we were able to get that hit on the quarterback and a recovery for a touchdown. That was big.”

Moreland had seen his Bearkatz (6-3, 3-2) trail for most of a back-and-forth game until the fourth quarter, holding off a driving Mountain View squad to take a 33-30 win.

“They were fighting for their lives,” Melbourne head football coach Casey Moreland said. “We had a lot of self-inflicted penalties or self-inflicted wounds, I guess. We have to do a better job on third downs and getting them off the field., but they gave us their best shot.”

Melbourne started Friday’s contest with Carter Bray breaking free for 20 yards. Melbourne quarterback Trey Wren had a nine-yard run, but a holding penalty set it back. Holden Hutchins ran for seven yards and a first down for the Bearkatz, then Wren threw to Bray for a 4-yard gain and found Malachi Cruz open for 11 yards and another first down. However, with the ball on the Mountain View 23, a Melbourne fumbled and Dustin Irwin recovered the ball for the Yellowjackets.

Mountain View quarterback Elijah Carlton ran for eight yards on first down, then passed to Trampas Stubbs for two yards. Carlton was stopped for a 1-yard gain and CJ Rose ran for another yard for a first down. After an incomplete pass, Carlton fumbled the ball in the backfield and suffered an 8-yard loss. Rentz punted for the Yellowjackets.

The Bearkatz started on their own 18 yard line with Wren passing to Cruz for three yards. Wren kept the ball for 17 yards and a first down, then he passed to Bray for a 22-yard gain into the Mountain View 40. Wren rushed for nine yards, then ran for seven more yards before Cruze picked up four yards to set up a 17-yard run from Hutchins. Hutchins ran for a yard, then completed the drive with a 2-yard run for a touchdown with 2:21 left in the first quarter. Fernando Ventura added the extra point to put Melbourne up 7-0.

Carlton passed to Irwin for 15 yards when Mountain View got the ball. Rose ran for nine yards and Carlton added two more yards on a keeper for a first down. Rose added a yard next and Kenner Gray added an 11-yard run for another Yellowjackets first down as the first quarter came to a close. When the second quarter opened, Carlton pitched the ball to Rentz, who passed to Irwin for a 48-yard touchdown. Bray blocked Mountain View’s extra point to leave the score 7-6 with 11:51 to go before halftime.

Melbourne started off with a procedure penalty and an incompleted pass. Two straight 10-yard penalties set the ball back to second-and-26 and that’s when Wren passed to Chayse Beene for 26 yards for a first down. The Bearkatz were whistled for another 10-yard penalty and Hutchins ran for six yards and Wren threw to Bray for 11 yards and a first down, then found Bray open for 20 more yards, but a 5-yard penalty erased the play. Wren ran for 10-yards, but lost one on the next play and fumbled it for a five-yard loss on fourth down. Seven plays later, Mountain View turned the ball over on downs to the Bearkatz.

With 3:14 to go in the first half, Wren ran for nine yards and Hutchins ran for two and a first down. Wren passed to Bray for a yard and hit Cruze for a 34-yard gain. Bray carried in for an 8-yard touchdown, but the extra point was blocked and Melbourne led 13-6 with 1:21 to go in the second period. When Mountain View got the ball, Carlton ran for 10 yards and passed to Matthew Smith for 19 yards. After a loss of one on first down, Carlton had an incomplete pass, then threw an interception to Logan Seay. After a personal foul penalty on Mountain View, the Bearkatz took a knee to run out the close and take the lead into the lockerroom.

It only took Mountain View four plays to score and take a one-point lead on Melbourne. Carlton ran for seven yards, six yards and broke out for a 50-yard touchdown run. Following the extra point kick, the Yellowjackets had a 14-13 lead.

The Bearkatz came back with a 34-yard run from Wren to get the ball inside the 10-yard line of the Yellowjackets. After a loss of two yards, Bray ran the ball down to the 1-yard line and Cruz finished off the drive with a 1-yard touchdown dive. The try for two-points failed and Melbourne led 19-14 with 6:49 to go in the third quarter.

On Melbourne’s next possession, Wren ran for five yards, Hutchins added four yards and then ran for 11 yards. After a holding penalty paused the drive, Wren found Beene wide open for an 18-yard touchdown. Ventura added the extra point to put the Bearkatz back in front 26-22 with 43 seconds to go in the quarter.

Mountain View was trying to drive when the disastrous fumble changed the momentum of the game and put Melbourne up 33-22 with 11: 04 to go in the game. The Yellowjackets went on an 11-play drive with Carlton running for 11 yards twice and 26 yards to get the ball to the Melbourne 10. A minute later, Stubbs carried in from three yards away and Carlton passed to Kenner Gray for the 2-point conversion that closed the Melbourne lead to 33-30 with 5:45 to go in the game.

“We had a couple of breaks,” Moreland said. “We had a big play when the ball went over the punters head and he slung it n the endzone.”

Melbourne will host Perryville in the first round of the Class 3A state football playoffs.