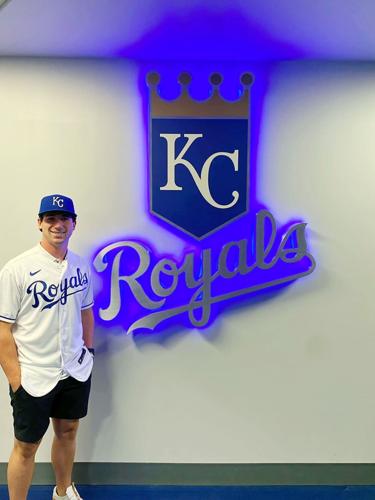 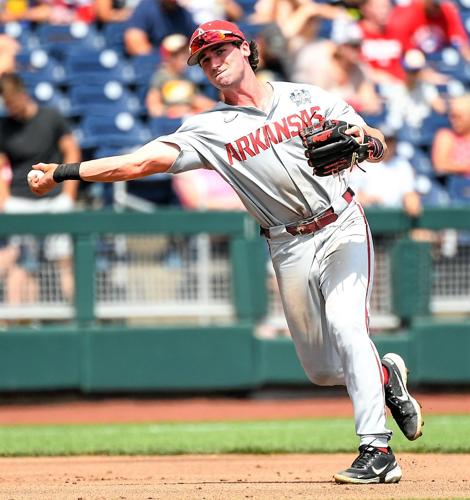 Arkansas third baseman Cayden Wallace throws for a put-out against Ole Miss at the College World Series in June in Omaha, Neb.

Arkansas third baseman Cayden Wallace throws for a put-out against Ole Miss at the College World Series in June in Omaha, Neb.

Cayden Wallace is getting to live a dream.

The former Greenbrier High School star baseball player recently signed his professional contract with the Kansas City Royals after a stellar, two-year collegiate career at the University of Arkansas.

Wallace, who started all 67 games for the Arkansas Razorbacks in 2022, helping them reach the semifinals of the College World Series, led the Razorbacks with 16 home runs and 60 RBI his sophomore season. Wallace hit .298, scoring a team-high 62 runs. He had 20 doubles, a triple and 38 base on balls. From his third-base position, Wallace had 110 assists and 29 putouts.

Wallace was drafted in the second round by the Royals. Their president of baseball operations is Dayton Moore, father of Arkansas second baseman Robert Moore.

“It’s definitely a dream come true,” Wallace said. “The negotiations took a little longer than we expected. Everything worked out. The Royals are an amazing organization with great people inside it. We knew that from the beginning. I’m really excited to be a part of that organization.”

Wallace said he is thankful for his time as a Razorback, where he hit 30 home runs in two seasons.

Wallace said Dayton Moore coming to most of the Razorback games probably helped some in his selection.

“I’m sure it affected them picking me,” Wallace said. “He watched me more than anybody has gotten the chance to watch me. I would feel like that would definitely affect him choosing me. He’s seen me over and over again.”

Wallace is not the first in his family to play professional baseball. His brother Paxton, who played at Wichita State, has played in the minor leagues for several years. Cayden and Paxton played one year of high school baseball together when Cayden was a freshman and Paxton was a senior.

“He was a big influence on me … a great role model, not only to me but everybody around him,” Cayden Wallace said of his brother. “He led by example. He showed up and played the game. He just didn’t complain. He showed us what it was like to be a great baseball player but an even better person. He’s my best friend and a great brother.

“We train all the time together. Playing my freshman year with him was an unbelievable experience. I learned a lot. We played a little bit together when we were younger. Getting to play a whole, full season with him was awesome. I got to bat after him. He was the three hole, and I was four. He had an unbelievable senior year. I was just trying to follow in his footsteps.”

Wallace is a 2020 graduate of Greenbrier High School. His senior season of high school was halted by the COVID-19 pandemic. But prior to that, Wallace was tearing up the high school scene in Arkansas.

“It’s been so exciting to watch the process,” Glover said of Wallace’s success at Arkansas. “I just think back to meeting him when he was an eighth grader when I took over at Greenbrier. He was a grown man as an eighth grader. His first year as a ninth grader was amazing. I got to watch him go through high school. Some of the stuff that he did was unbelievable.”

Wallace said he was blessed to have played under the coaching staff at Arkansas.

“When I got to Arkansas, I knew I’d be able to get under coach Nate Thompson, Cach Dave Van Horn and Coach Matt Hobbs and all the amazing assistants throughout the program. I knew when I got there that I already knew a lot of baseball. Obviously, there are still improvements to be made. Just going to Arkansas, I knew I was set up for success, just because of the coaching staff and my teammates. It was really good to learn and play under them. It was a very good experience for me.”

Wallace said his love for baseball started when he was 2 or 3 years old when his brother started playing organized baseball.

Prior to high school, Wallace said he played football and basketball and ran track. His cousin, Kayle Browning, won a silver medal in trap shooting at the 2021 Summer Olympics.

“Me, Kayle and my brother like to put Wooster and Greenbrier on the map a little bit,” Wallace said. “It can inspire the younger guys to know that they can follow their dreams. Just because you are from a smaller town doesn’t mean anything. All they have to do is work and believe and just dream that they can do it. Putting the work in and get themselves in the right spots with the right people, it’s very real. All you’ve got to do is dream it.”

A week ago, Wallace was in Surprise, Ariz., working out at the Royals training facility.

“We’re here training, just trying to get back up to speed,” he said. “I guess they could assign us to rookie ball. I’m not really sure.”

One of the biggest differences in college and professional baseball is the use of the wood bat. Wallace said it’s not a big deal to him.

“To me, it’s never been a big change,” he said. “I’ve always loved using wood. I feel more comfortable using a wooden bat. I was excited to come back to wood bats. The training has been good. We’re hitting, working out, fielding, hitting and base running. It’s a pretty cool environment. The Royals complex is unbelievable. There are really good people in and out. The player development is really good.

“It’s definitely been a blessing that God put me here.”