Skip to main content
You have permission to edit this article.
Edit
Home
News
Sports
Obituaries
Local Events
e-Edition
Classifieds
Share This
1 of 3 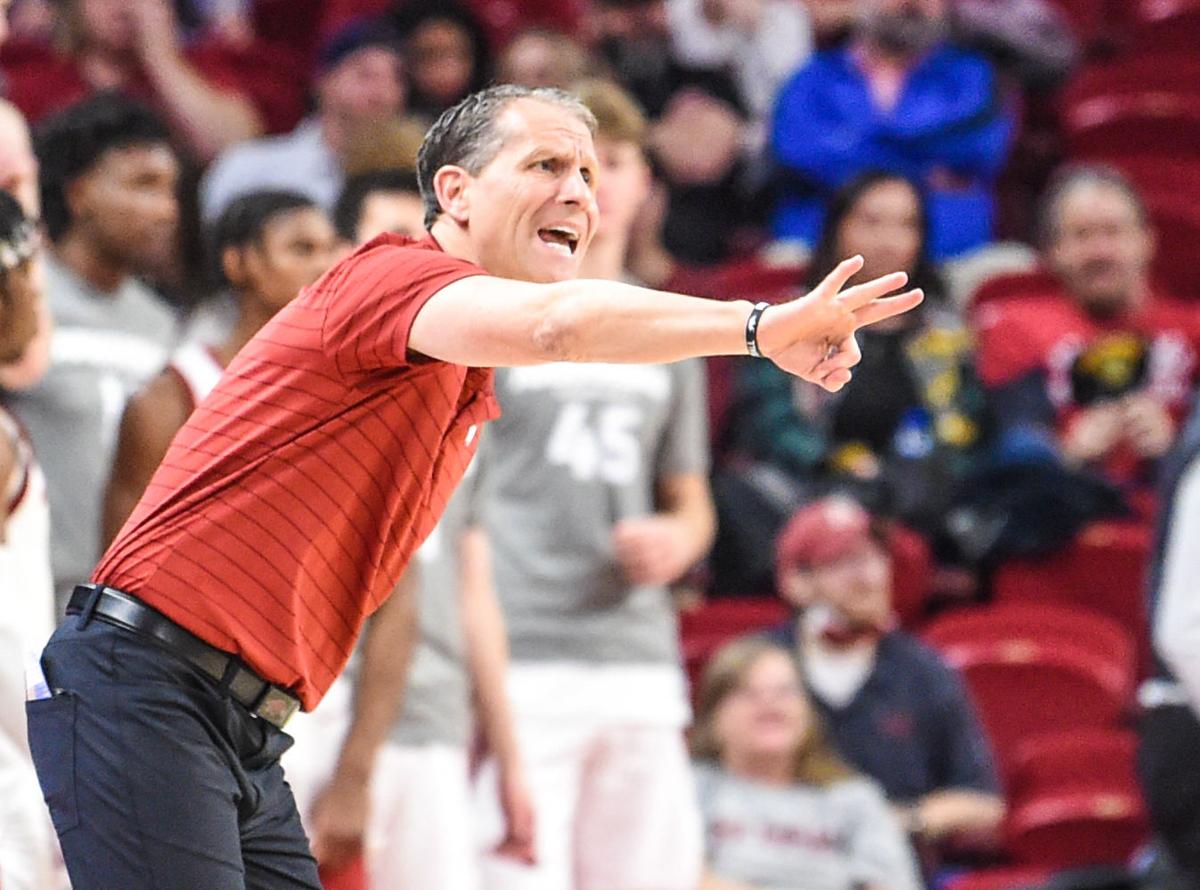 Razorbacks head basketball coach Eric Musselman encourages his team to block out for a rebound. 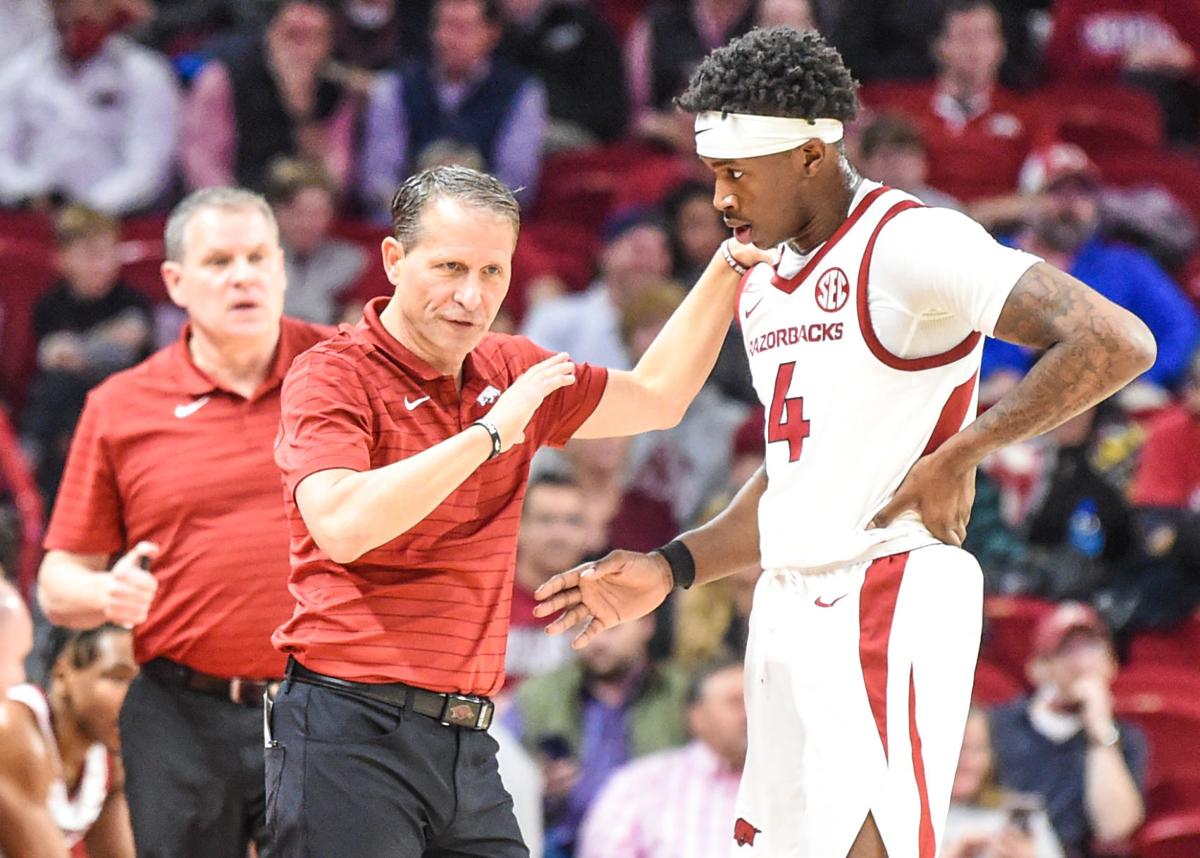 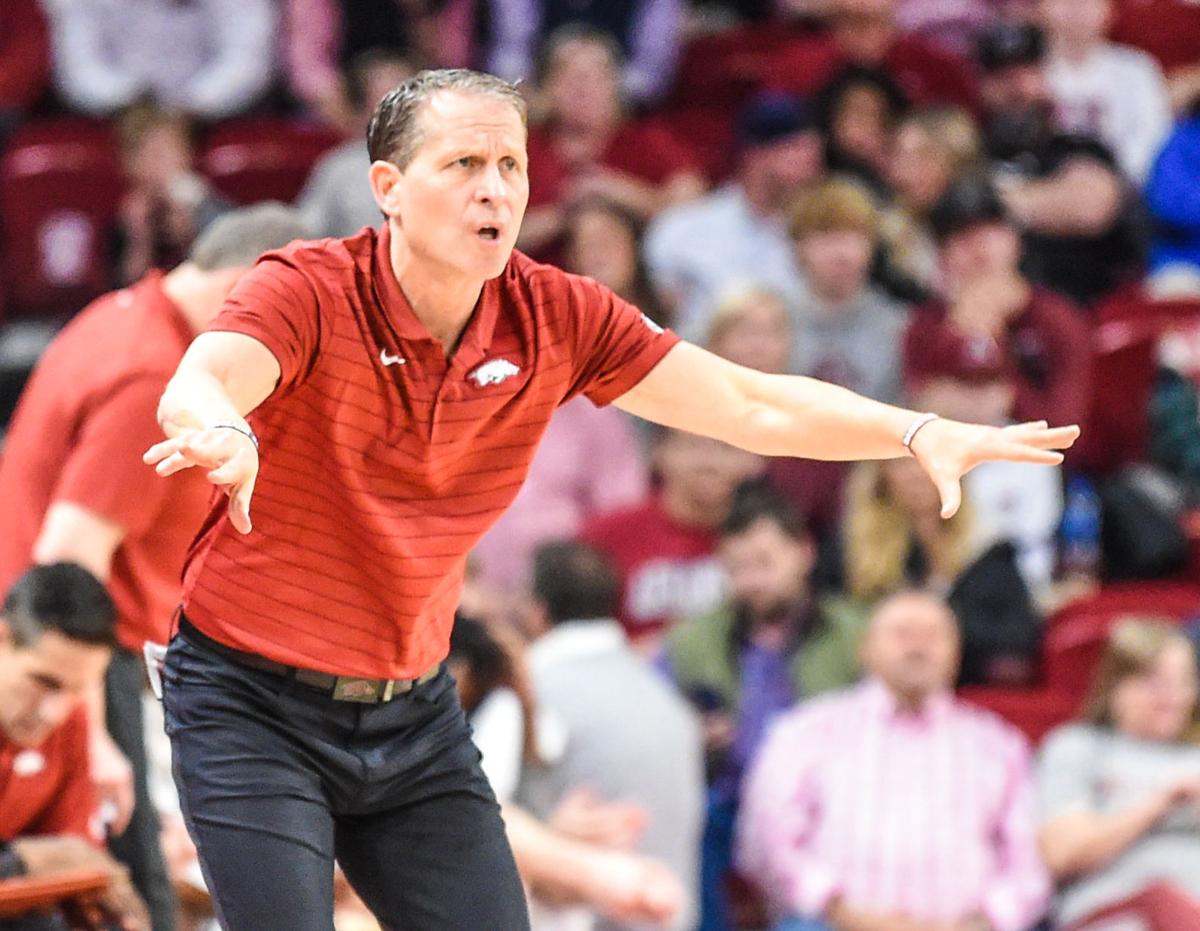 . Razorbacks head basketball coach Eric Musselman disagrees with a foul called during the game with Elon at Bud Walton Arena in Fayetteville.

Razorbacks head basketball coach Eric Musselman encourages his team to block out for a rebound.

. Razorbacks head basketball coach Eric Musselman disagrees with a foul called during the game with Elon at Bud Walton Arena in Fayetteville.

Meanwhile coach Eric Musselman’s Razorbacks have lost five of their last six to be 10-5 overall and wallow 0-3 in the SEC for the first time since John Pelphrey’s 2009 Razorbacks went 2-14 in the league.

Lackluster and without then COVID quarantined JD Notae when they opened SEC play losing 81-68 at Mississippi State before falling, 75-74 to Vanderbilt at Walton Arena where they return to play Missouri at 8 p.m. Wednesday on the SEC Network, the Hogs Saturday led by 11 early during the first half they closed down, 37-35.

Notae’s 31 points Saturday certainly provided something they didn’t have without him in Starkville. And Musselman said Notae showed more stamina than in his return last Tuesday against Vanderbilt when he took 17 shots to score 16 points.

Notae shot 11 of 23 , including 5 of 8 treys in College Station, grabbed five rebounds, dished three assists and made two steals.

“We knew we were going to miss him, which we certainly did at Mississippi State,” Musselman said. “I thought our last home game, he didn’t have his legs, which is to be expected when you’re out. He played much better offensively tonight. I thought he did a pretty good job drawing fouls (4 of 7) as well. He did a good job on the backboards for a guard.”

All Arkansas good until adding Notae’s five turnovers to four by guard Devo Davis and four by center Jaylin Williams plus others totaling 18 to A&M’s 13 and a devastating, 28-16 A&M points off turnovers advantage overriding Arkansas’ 46-32 rebounding advantage.

“The turnovers,” Musselman moaned. “Live-ball turnovers end up in such high percentage shots at the other end. I thought our effort on the glass to have 20 offensive rebounds, to out-rebound them 46-32 on the road... but we have to do a better job of taking care of the ball. You can’t have that many turnovers, especially on the road.”

Defending the three, A&M shot 8 of 19 including, the 3-point dagger plunged by A&M’s Quenton Jackson at :34 for the 82-78 lead after the Notae jumper at 1:08 brought the Hogs to down just 79-78 haunted Arkansas again, Musselman said.

Too many turnovers is a new malady to third-year Arkansas coach Musselman off the the University of Nevada team he coached previously and his first two Razorbacks teams.

“What’s really tough is when your team for seven years has done a great job taking care of the basketball and right now we’re way, way too careless with the basketball,” Musselman said. “I don’t mind saying that we have a goal of nine or less turnovers every game. We doubled that up. So that’s a major, major problem.”

All that and foul trouble hampering forwards Stanley Umude and Au’Diese Toney made it an Arkansas tough row to row. Umude and Toney combined for 48 points against Vanderbilt.

Saturday Umude fouled out with 10 points in 23 minutes.

Toney, playing with four fouls throughout the second half, finished with nine points, including a key-and-one 3-point play during the late comeback, and six boards.

With Umude second-half fouled out at 13:45 reserve power forward Kamani Johnson played considerably down the stretch. He contributed seven points, eight rebounds, second only to Jaylin Williams’ 11, a blocked shot and a steal and a body wearing the varnish off the Reed Arena floor diving for loose balls.

“I do think Kamani Johnson played with great physicality,” Musselman said. “He gave us some identity. He dove on the floor. Again I think at the eight-minute mark, he competed at a high level.”

The Razorbacks with :05 left had Devo Davis on the free throw line down 84-80. Davis made the first. He intentionally missed the second trying to give Arkansas a last chance to rebound for a game-tying and-one 3-point play inside or a kick-out but was too anxious and cited for a lane violation forcing the Hogs to foul.

Davis, 9 of 10 from the line, scored 13 while Williams, a double-double with 11 rebounds, scored 10 points as did Umude.

Jackson’s 16 points, his last on his decisive three, with Aggies Henry Coleman, Andre Gordon and Tyrece Radford respectively scoring 14, 13 and 12.

Musselman took heart in the Hogs’ fierce comeback effort but was mystified they played so poorly at the second half’s outset allowing the Aggies to pad a two-point halftime lead up to 17.

“Really disappointed with how we came out to start the second half because I thought we fought and battled and played well in the first 20 minutes,” Musselman said. “It’s been an issue with this team coming out, those first four minutes, until that first timeout.”

They did fight back as they did against Vanderbilt.

“We’ve had two back-to-back games where we could have won,” Notae said. “We’ve just got to finish. We’ve seen that we were there, so we’ve just got to take care of business.”

Partly cloudy this evening followed by increasing clouds with showers developing after midnight. Low around 45F. Winds S at 5 to 10 mph. Chance of rain 40%.

Partly cloudy this evening followed by increasing clouds with showers developing after midnight. Low around 45F. Winds S at 5 to 10 mph. Chance of rain 40%.

Periods of rain. Some sleet may mix in late. Morning high of 52F with temps falling to near 35. Winds SE at less than 5 mph, becoming N and increasing to 10 to 20 mph. Chance of rain 80%. Rainfall near a quarter of an inch.