Skip to main content
You have permission to edit this article.
Edit
Home
News
Sports
Obituaries
Local Events
e-Edition
Classifieds
Share This
1 of 7 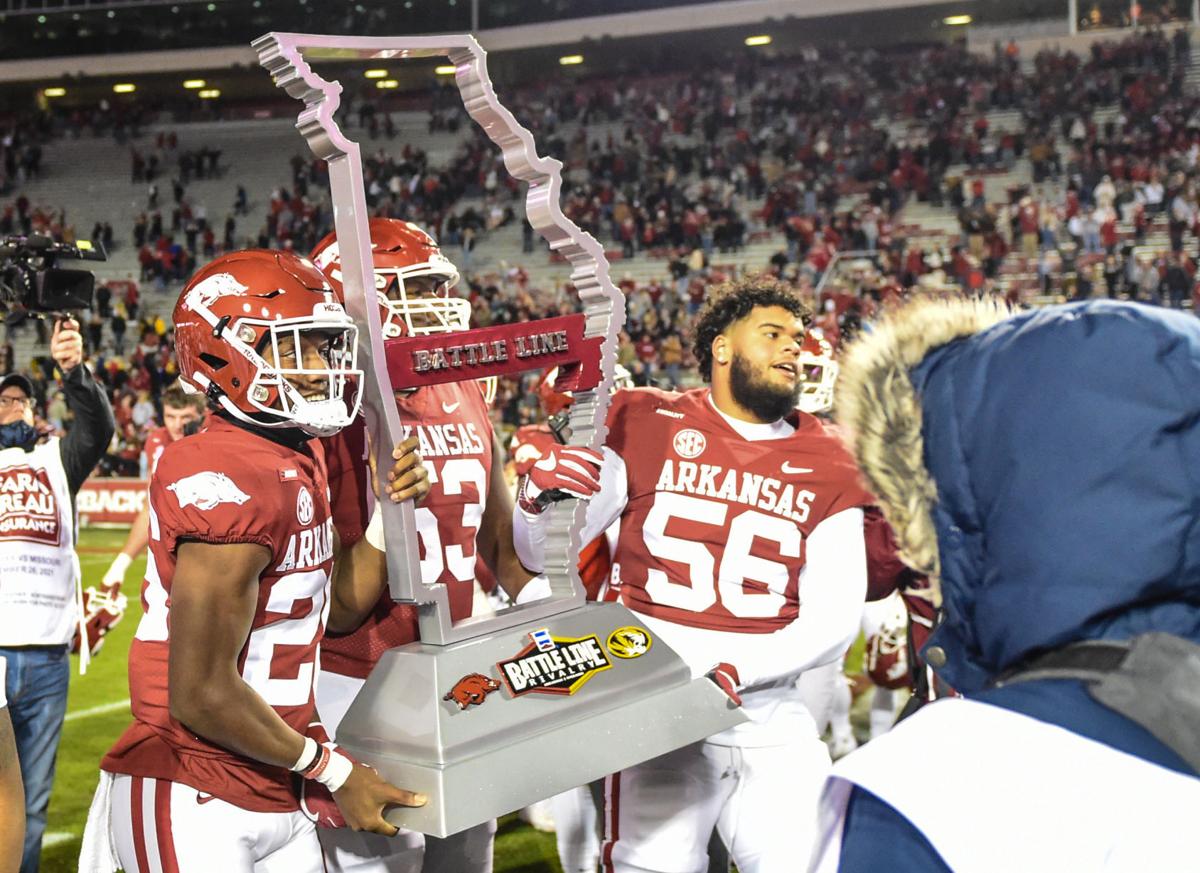 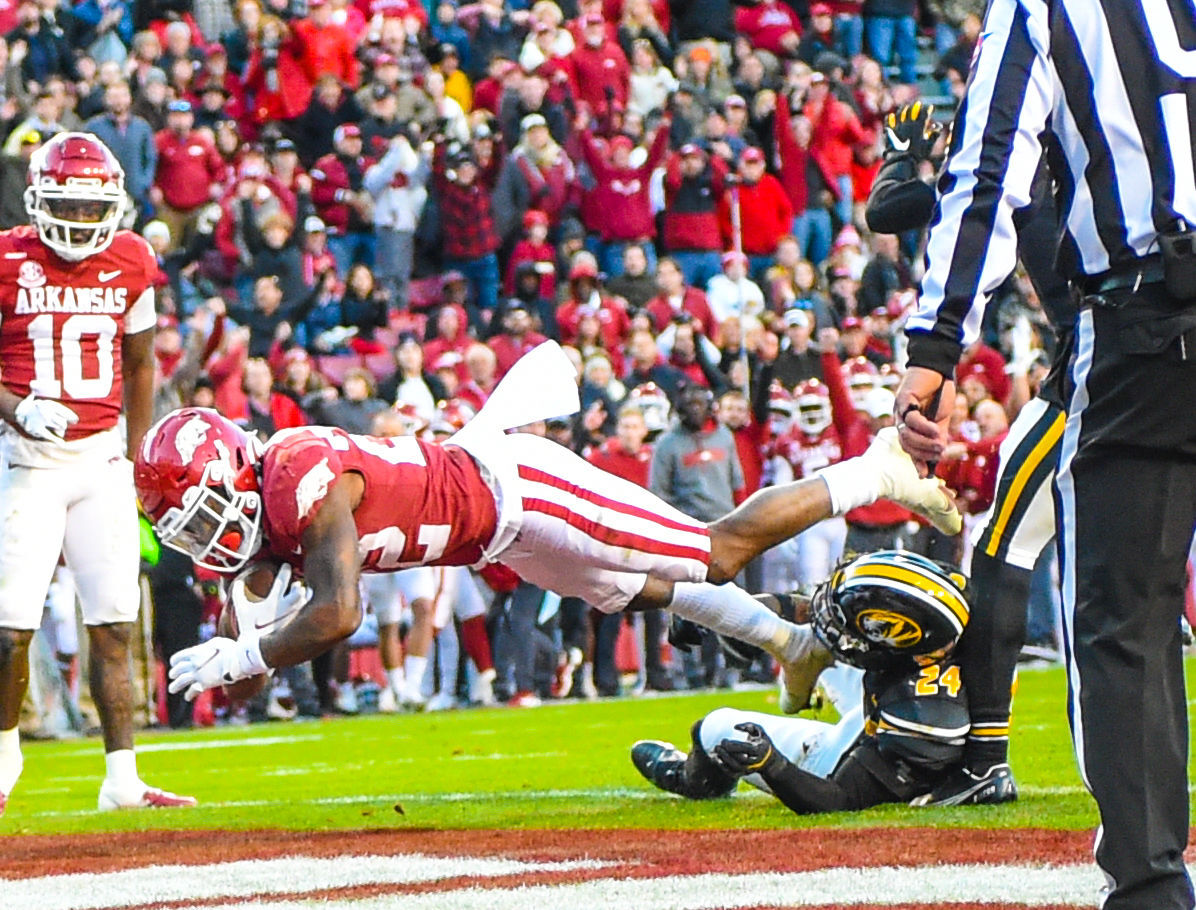 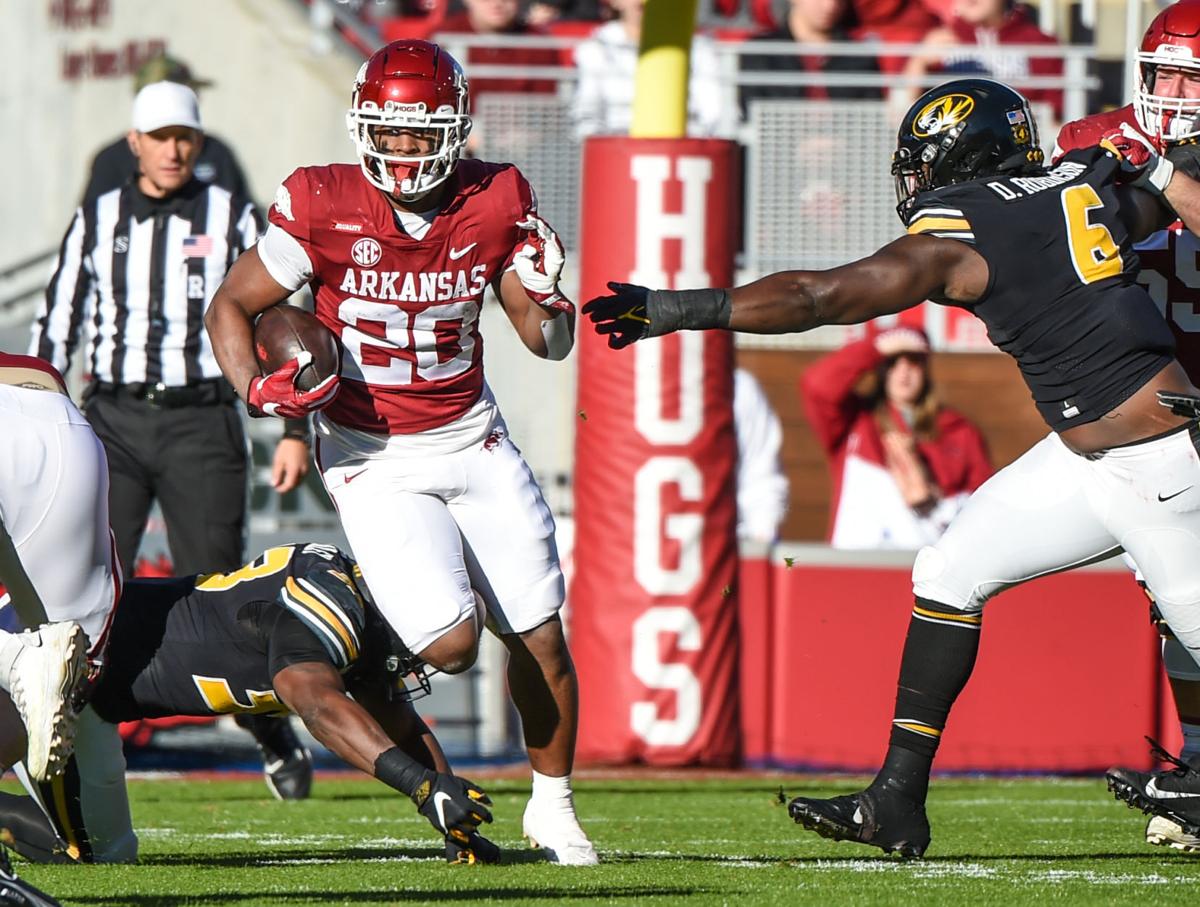 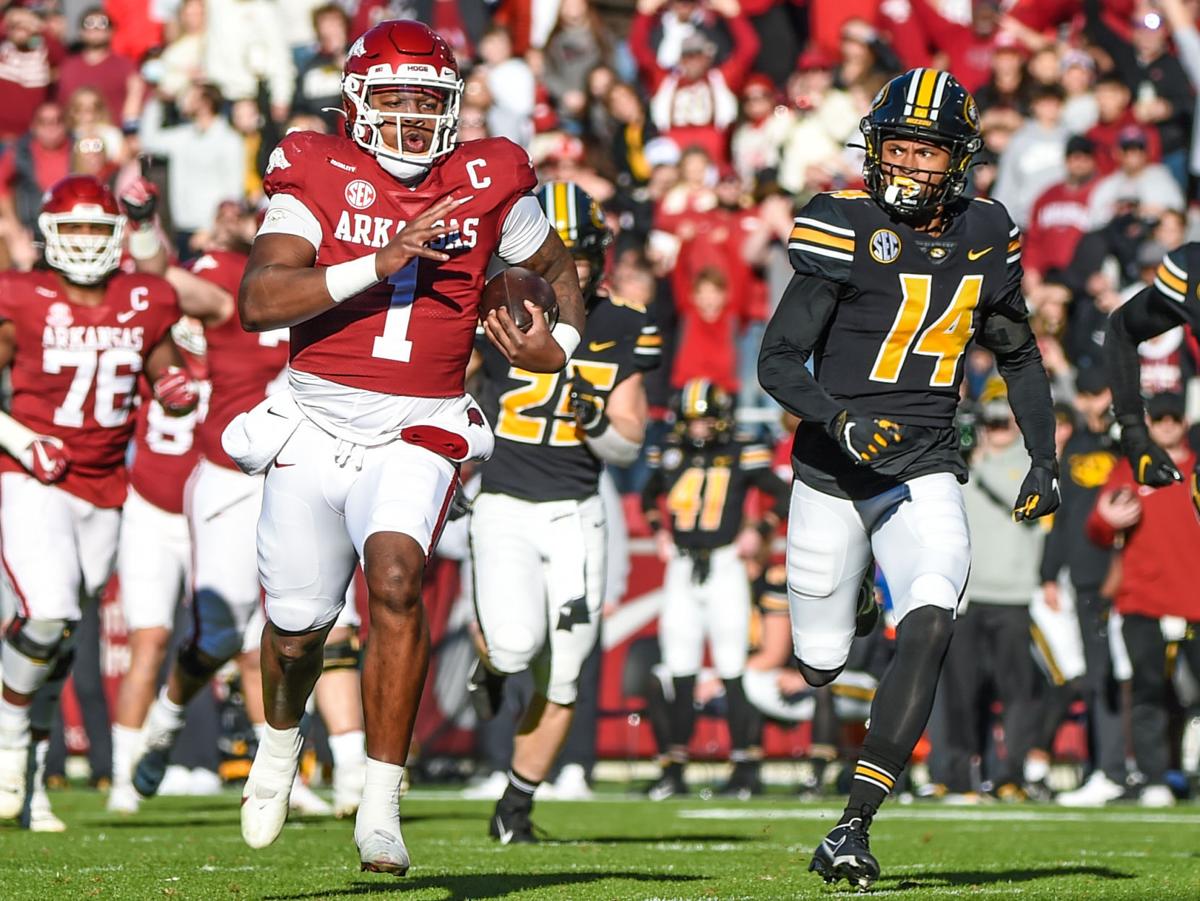 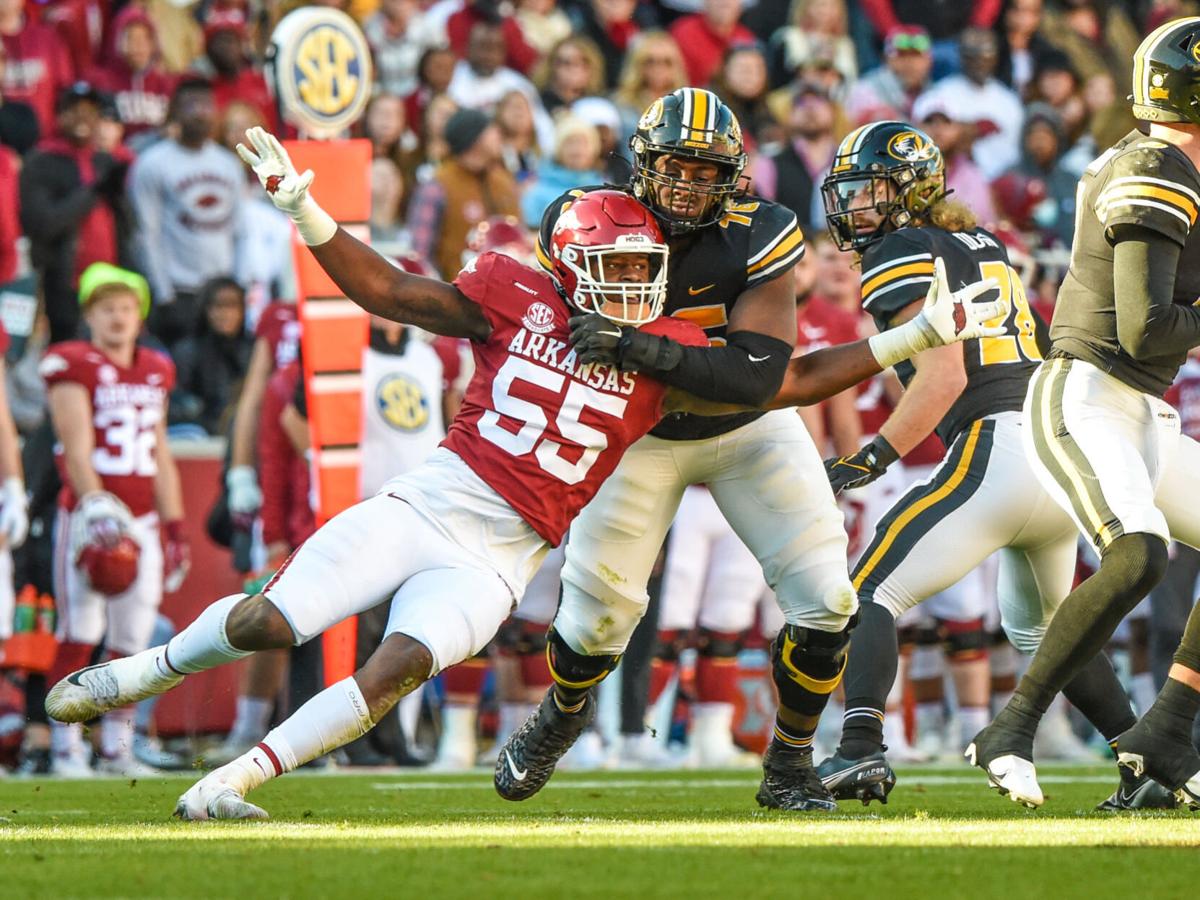 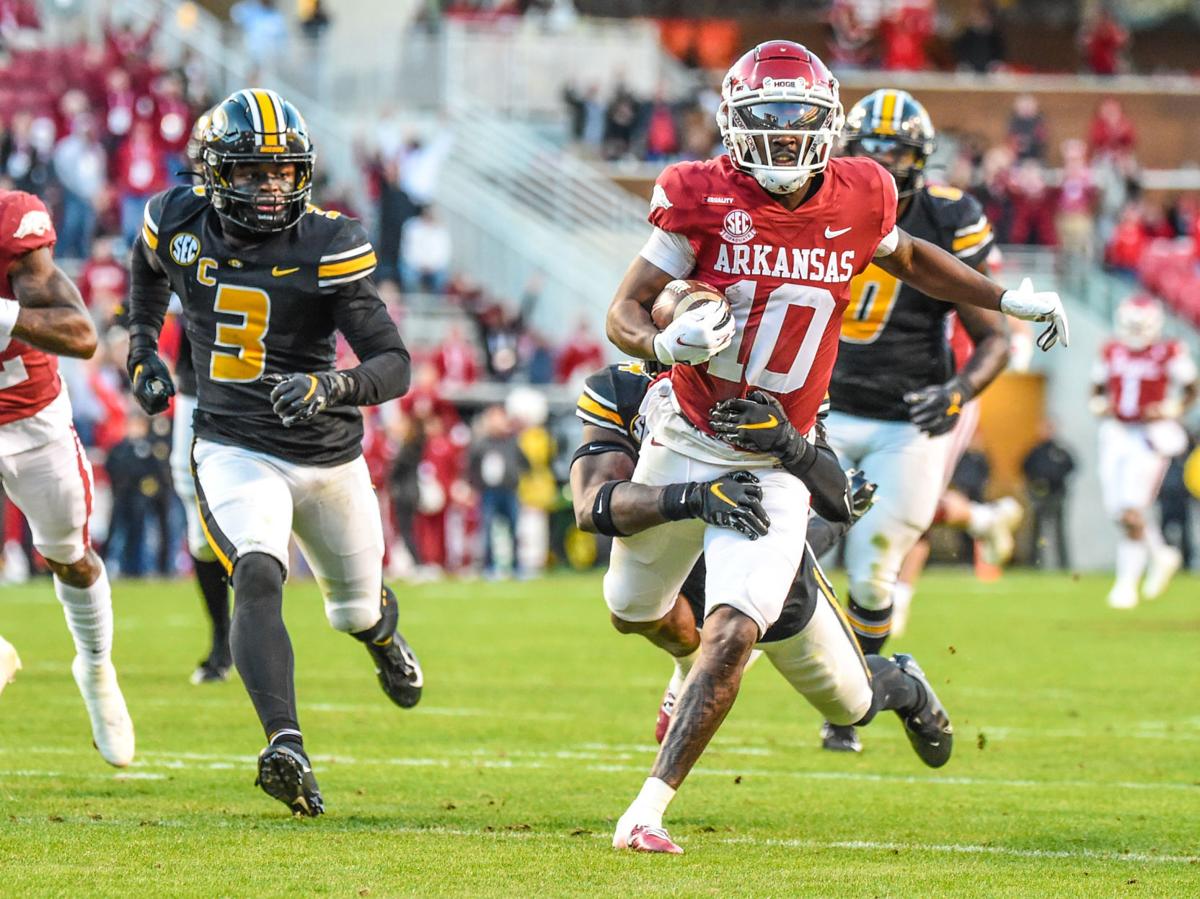 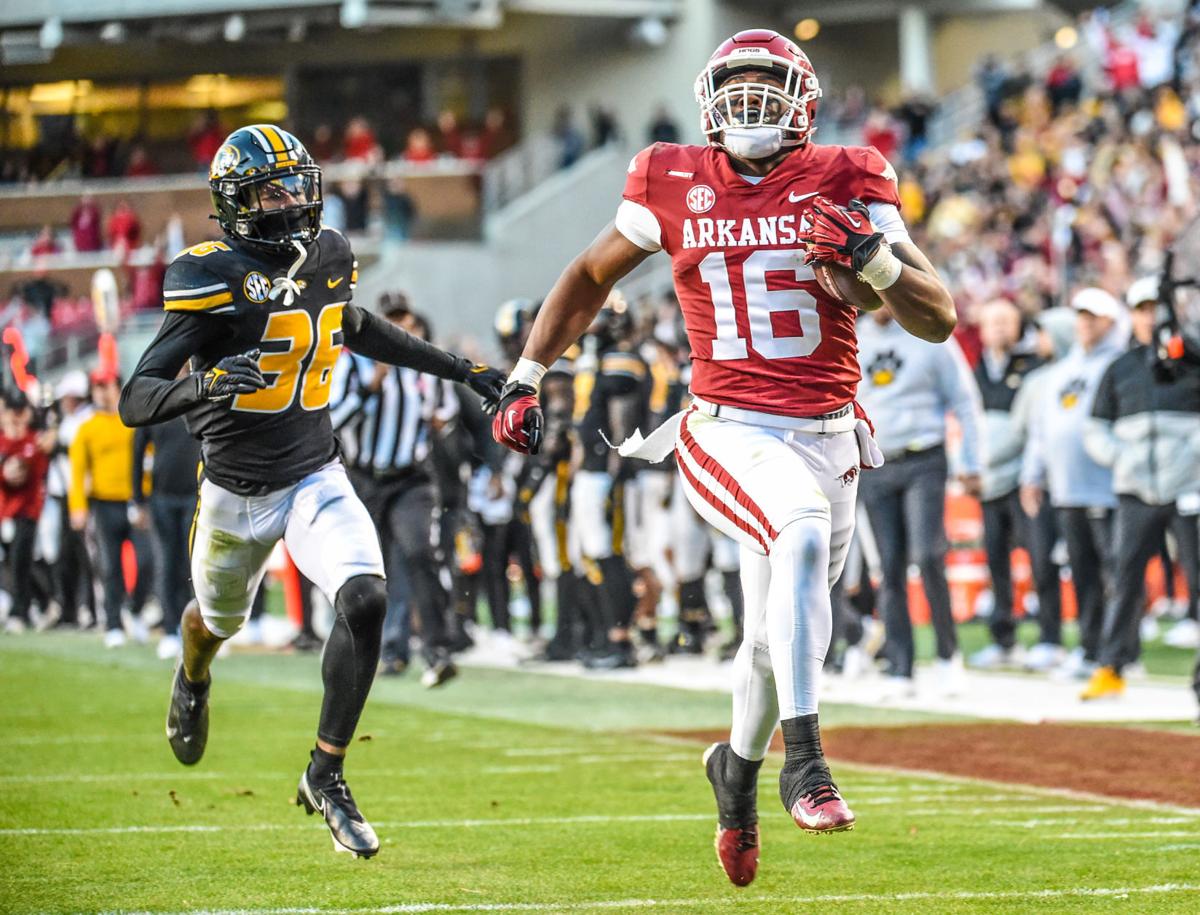 FAYETTEVILLE — Outplayed by Missouri’s defense for the first half but leading, 10-6 at intermission mainly because of an outstanding Razorbacks defense, Arkansas’ KJ Jefferson/Treylon Burks fueled offense erupted for three second-half touchdowns and a field goal for a SEC season ending 34-17 victory Saturday at Reynolds Razorback Stadium.

The victory over the bowl bound now 6-6 overall, 3-5 in the SEC East Missouri Tigers improves second-year Arkansas Coach Sam Pittman’s Razorbacks to finish 8-4, 4-4 in the SEC West and send them, they hope, on to one of the better bowls such as possibly the Outback Bowl, Jan. 1 in Tampa, Fla. or the Gator Bowl, Dec. 31 in Jacksonville, Fla. The Razorbacks won’t know their bowl destination until after next Sunday’s meeting of the College Football Playoff committee.

Saturday sufficed for them celebrating breaking Missouri’s since 2016 5-game winning streak in their annual SEC game and bringing home the game’s Battle Line Rivalry Trophy. Pittman had it ready for the team postgame to pose with along with the Southwest Classic and Golden Boot trophies the Hogs won this season from Texas A&M and LSU, plus Larry the Bowling Ball which Pittman had purchased as celebration when the Hogs became bowl eligible with their sixth win on Nov. 6 against Mississippi State.

All gave kudos to Barry Odom, Arkansas’ defensive coordinator joining Pittman’s first Arkansas staff in 2020 but a Mizzou grad and Mizzou head coach 2016-2019 fired despite closing with a victory over Arkansas.

“I was hoping we’d win so we could take a team picture with all the trophies and of course we had to bring Larry in,”Pittman said on postgame radio “I’m so proud of the kids, happy for the seniors, appreciate Razorback Nation coming out and being loud for us, proud for Barry Odom, the way the defense played. And I’m just proud for the University of Arkansas. It’s been a heck of a road, a heck of a season!”

Even 2020 improved, they didn’t win any of the trophies last year that they’ve now swept.

“To have all three of them in the first time in the history of the University of Arkansas or to beat all three of those teams in the same year, it’s a great tribute to those kids and my assistant coaches,” Pittman said.

Odom’s defense couldn’t stop superb SEC leading rusher running back Tyler Badie from running, 19 carries for 219 yards. But they kept him from scoring until his 5-yard touchdown followed by a successful 2-point conversion with 1:25 and the Hogs and their 34 points insurmountably ahead.

Three Harrison Mevis field goals, two of 45 and 49 yards in the first half, and an 41-yarder in the third quarter on a drive consuming 7:45 with Mizzou needing quick scores to catch up, was all else Missouri mustered.

“Such a fine football player,” Pittman said. “I mean 41 carries, 219 yards and a touchdown. I mean the guy is tough, physical.”

Bazelak excelled when Mizzou outscored Arkansas, 50-48 last year in Columbia, Mo. but Saturday in Fayetteville , he completed but 10 of 26 for a meager 65 passing yards on 10 of 26 and was intercepted once. Ashdown’s Montaric “Busta” Brown, the Arkansas cornerback with the key overtime interception setting up Arkansas’ victory at LSU, set up Arkansas’ final touchdown Saturday for a 34-9 lead with 9:52 left in the game.

Arkansas senior linebackers Bumper Pool, 13 tackles, Hayden Henry, 10 tackles including one for a loss plus credited with two quarterback hurries and a pass breakup, and Grant Morgan, seven tackles with a quarterback hurry, safety Myles Slusher, nine tackles with a pass breakup, led a defense that baffled Bazelak and bent but didn’t end zone break to Badie until way too late for Mizzou. “The linebackers are outstanding,” Pittman said. “Don’t they run to the ball? With Bump and Hayden and Grant, they’ve been that way all year. Certainly, you have to give Missouri credit on their offensive line, but they made a lot of tackles for Badie to have the yards he had. But they (Arkansas’ defense) made a lot of tackles. And Mo (Brown) he just seems to be big play Mo.”

Jefferson, Saturday’s passing opposite of Bazelak completing 15 of 19 for 262 yards and a touchdown without a turnover, and also Arkansas’ leading rusher 58 yards on 6 carries, and Burks, 7 catches for 129 yards and a touchdown plus a nifty option pitch to running back Raheim “Rocket” Sanders for Sanders’ second and Arkansas’ final touchdown, struck for big plays on Arkansas’ first possession after Mizzou’s game-opening three and out.

Burks caught an 11-yard Jefferson pass and Jefferson broke a 49-yard before the offense stalled and settled for Cam Little’s 39-yard field goal.

That first drive having to settle for a field goal finish set the tone for what Pittman called, “tough sledding” for Arkansas’ first half.

Senior running back Trelon Smith, atoning with a second-half touchdown that would have been won but for a holding penalty, fumbled setting up Mevis’ first field goal.

It was Arkansas’ lone turnover but the offense still couldn’t untrack until breaking the 3-3 tie with an 8-play 76-yard second quarter drive. It was most fueled by a Jefferson to Burks 41-yard bomb to the Mizzou seven, a 6-yard Jefferson to Burks pass and finally Sanders’ 1-yard touchdown and Little’s PAT at 5:53.

Because of a rare Badie mistake, he grabbed Slusher’s facemask for a key penalty after Mizzou drove to the Arkansas 30, the Tigers settled for Mevis’ second field goal.

Other than Jefferson and Burks playing hurt, Pittman more than reminded the offense at half he didn’t appreciate their energy or lack thereof nor being stifled by Mizzou’s load the box to stop the run.

Trelon Smith scored from the one.

Jefferson and Burks went deep, a 52-yard TD with Burks eyeing one-on-one man coverage like a wolf spotting a chicken strayed from the henhouse.

“Really I’m not going to lie you,” Burks said of what he sees when the coverage is one on one. “That probably I’m fixing to score.”

Jefferson and freshman receiver Ketron Jackson combined for a 39-yard pass on the drive capped by Little’s 23-yard field goal after the holding penalty voided what would have been Smith’s 16-yard touchdown run.

“We won eight games,” Pittman said. “I certainly believe that we’ll be a choice of a really good bowI. We haven’t been to one of those type bowls in awhile, at least 10 or 11 years, and I know our fans will come and support our kids.

A clear sky. Low near 25F. Winds light and variable.

A clear sky. Low near 25F. Winds light and variable.