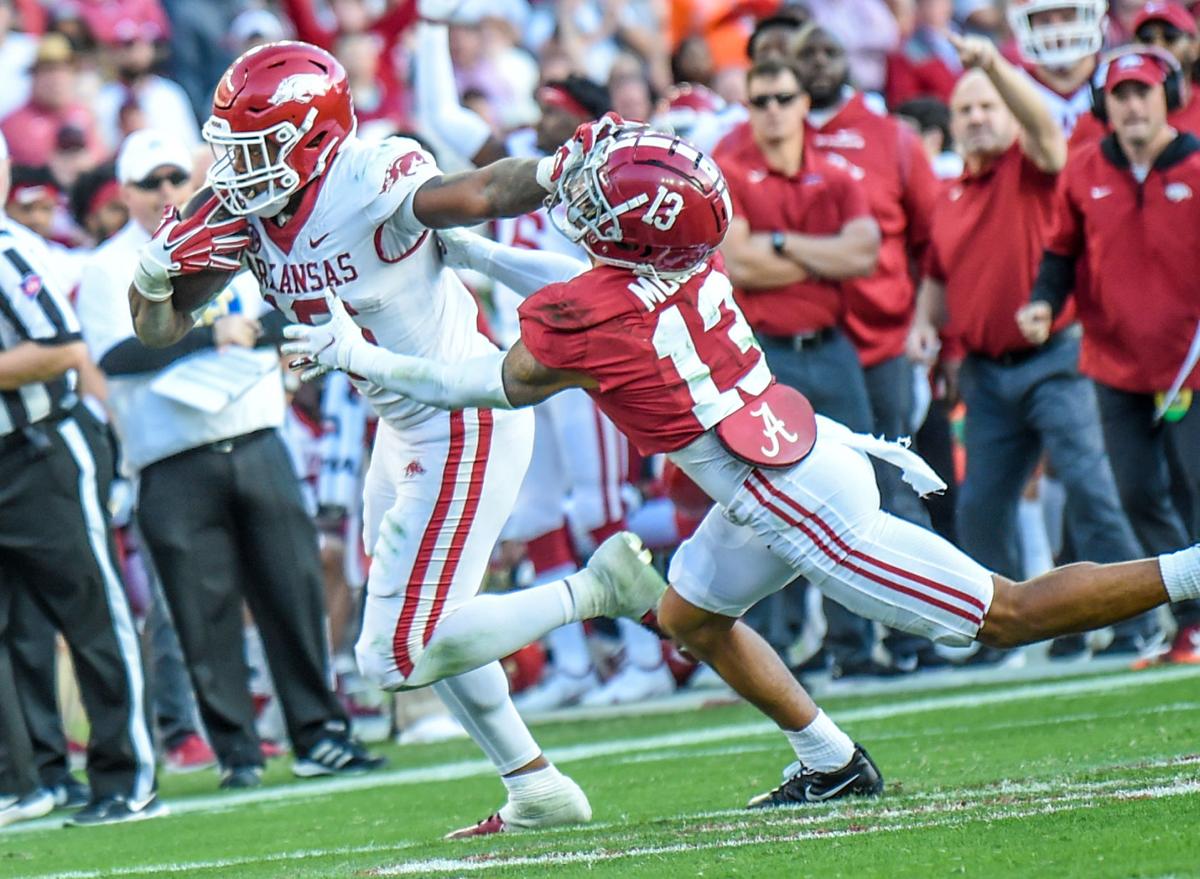 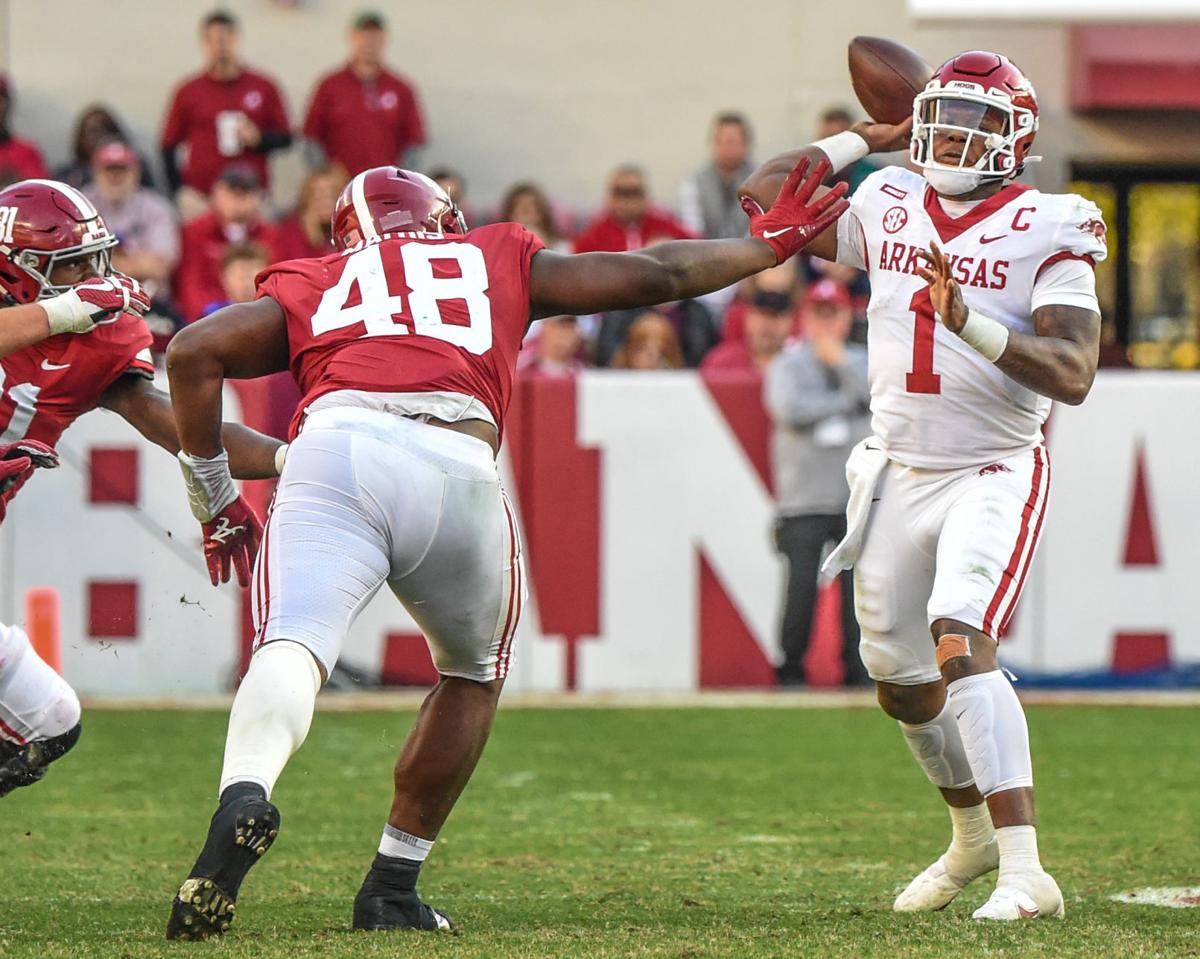 Razorback sophomore quarterback KJ Jefferson (1) from Sardis, Mississippi, throws for a first down against Alabama Saturday afternoon at Bryant-Denny Stadium in Tuscaloosa, Alabama.

Razorback sophomore quarterback KJ Jefferson (1) from Sardis, Mississippi, throws for a first down against Alabama Saturday afternoon at Bryant-Denny Stadium in Tuscaloosa, Alabama.

FAYETTEVILLE — Nationally No. 2 Alabama wrought an A-1 Heisman Trophy worthy performance from leading Heisman contending quarterback Bryce Young and needed every bit of it fending off No. 21 Arkansas, 42-35 in Saturday’s SEC West game at Alabama’s Bryant-Denny Stadium in Tuscaloosa.

Without an interception, Young completed 31 of 40 passes for 559 yards and five touchdowns Saturday. Young completed 8 for 190 yards and three touchdowns to Biletnikoff semifinalist receiver Jameson Williams and 10 for 173 yards and a touchdown to receiver John Metchie upping Alabama’s overall and SEC records to 10-1, 6-1. Coach Nick Saban’s Crimson Tide clinched the SEC West title and a Dec. 4 SEC Championship game in Atlanta against nationally No. 1 SEC East champion Georgia, regardless how the Tide rolls in its SEC finale next Saturday against Auburn.

The Razorbacks, a bowl bound 7-4, 3-4 in the SEC headed into their SEC Friday’s finale against Missouri at Reynolds Razorback Stadium after going 0-8, 0-8 in the SEC in 2018 and 2019 under Pittman’s predecessor, last year finished discouragingly an encouraging 3-7 entirely SEC season drubbed, 52-3 by the Tide in Fayetteville.

The Hogs were a bouncing out of bounds onside kick away from assembling one last upset chance after Jefferson finished a fourth 75-yard scoring drive with a 17-yard touchdown pass to running back Raheim “Rocket” Sanders with 1:02 left in the game.

Given how the favored by 20 points Tide has rolled the Hogs since their last close game, 14-13 in 2014, Saturday could be considered an Arkansas moral victory.

Not by Pittman nor his Hogs.

“We play to win and we felt like we could come here and win,” Pittman said. “‘We did not come here to lose by seven. I think you could see by the way we played. We just ran into a team that was seven points better than us tonight.”

“I think there was 70 guys (the Razorbacks travel squad) that believed we could win the game today,” Morgan said. “It sucks because we all came here to win. We’re not into moral victories but at the end of the day that’s a really good ballclub.”

The second best in the nation that as national champion slaughtered the Hogs last year as did then No. 2 now No. 1 Georgia, 37-0 on Oct. 2 Between the Hedges in Athens, Ga.

But since that Georgia game cooled a 4-0 start, Pittman’s Hogs have won three and four to four ranked teams, all competitively certainly including Saturday against the usually tormenting Tide.

“I’m proud of our football team and that’s what I told them,” Pittman said. “We had a chance to win the ballgame and matched the physicality that Alabama is known for. I just told them ‘The days of getting kicked around and getting our teeth kicked in are over.”

It’s what Saban said he anticipated.

“I knew they had a good team and I knew it was going to be a tough game,” Saban told CBS postgame. “I’m proud of our players for the way they played and the way they finished.”

Even the Razorbacks had pride for how Bryce Young played against them.

“You could tell he has a good head on his shoulders so I hope he wins the Heisman,” Morgan said. “He’s really good. We didn’t do enough to stop him but he’s a really good player.

With a great cast like Williams (“a special, special player,” Pittman said adding ruefully “He’s really good and we made him look better,”) Metchie, running back Brian Robinson (27 carries for 122 yards) and an offensive line that mostly protected their elusive quarterback though the Hogs did achieve four sacks.

Anderson made his mark, but Burks, excelling despite injured early in the game and needing assistance off the field off Anderson’s hit during the onside kick, and Jefferson obviously made theirs.

“As a character and a player I thought KJ was outstanding,” Pittman said. “He’s just a tough guy and I’m glad he’s our quarterback.”

“I think he’s probably beat up, but he just kept coming back,” Pittman said. “He won a lot of one-on-one matchups tonight. He’s a tough, great player, but a better person. He had a heck of a game tonight.”

The game with 77 points actually began with defense with Alabama forcing a first possession Arkansas punt then Arkansas gang-tackling Robinson on a fourth and 1 from Arkansas’ 30.

But the defense holding Alabama settling for Will Reichard’s 48-yard field goal. Reichard would kick another from 30 during the third quarter and would miss from 47 after linebacker Hayden Henry’s sack dumped Young for minus 13.

The first quarter ended just 3-0 but was 10-0 six seconds into the second quarter on Young’s 20-yard TD to Metchie capping a 98-yard drive after Reid Bauer punted the Tide back to its 2.

Bauer not only punted effectively, but as the holder on a fake field goal completed a 32-yard touchdown pass to tight end Blake Kern bringing Arkansas to down just 34-28 with 11:11 left in the game.

Before Bauer pulled off his second fake in as many weeks, he ran for a first down during the 16-13 victory at LSU, Jefferson capped a 94-yard drive with a 15-yard TD to Burks.

Young and Jameson Williams countered with a 79-yard TD for a 17-7 lead that Arkansas narrowed to 17-14 on running back Dominique Johnson’s 1-yard plunge after the initially ruled Jefferson to Warren Thompson touchdown was reviewed to be 40 yards and downed at the 1.

Young and Jameson Williams again, this time a 32-yard TD, had the Tide rolling, 24-14 at half.

Arkansas cornerback Montaric Brown, with a ball-stripping tackle and fumble recovery at the Arkansas one, deprived Alabama of one drive that seemed destined to score.

Still, the Tide when up, 31-14 in the third quarter, seemed rolling toward a familiar rout that these Hogs turned back and came closer than any predicted of turning around.