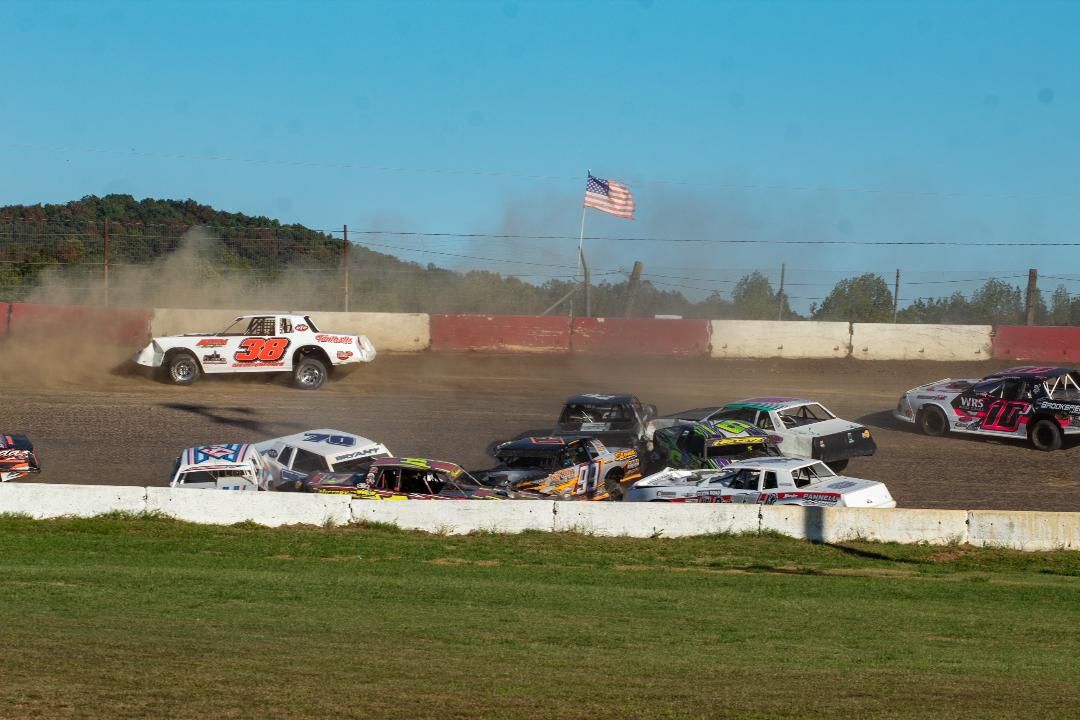 A wreck in turns one and two took out 13 cars in the A-main feature race. 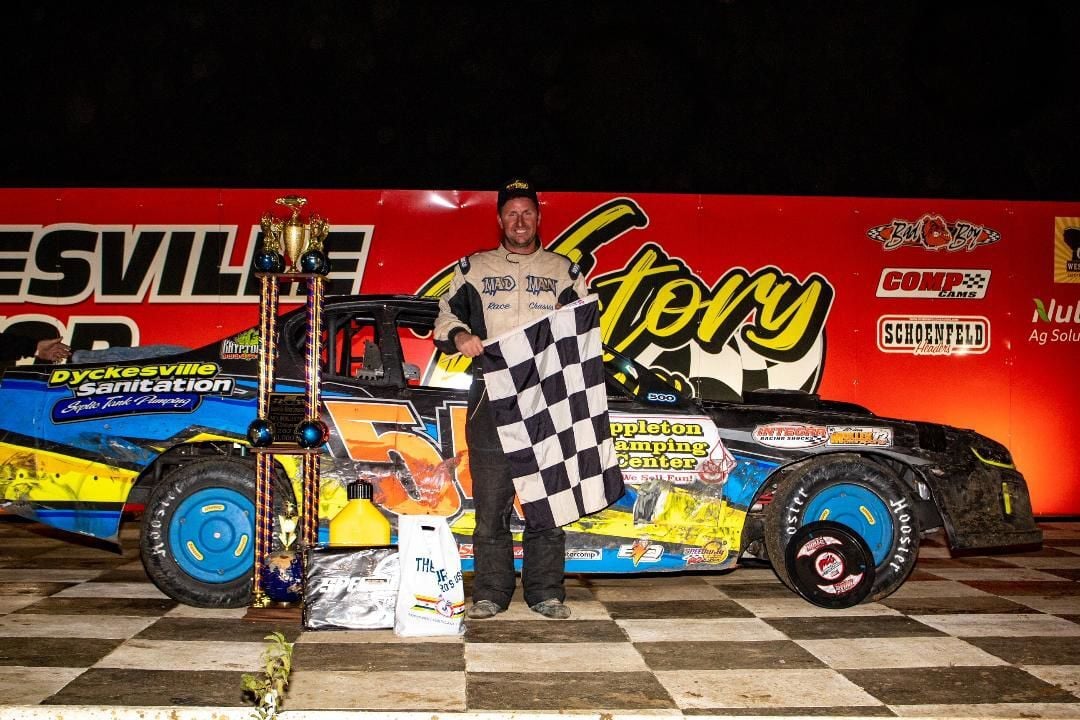 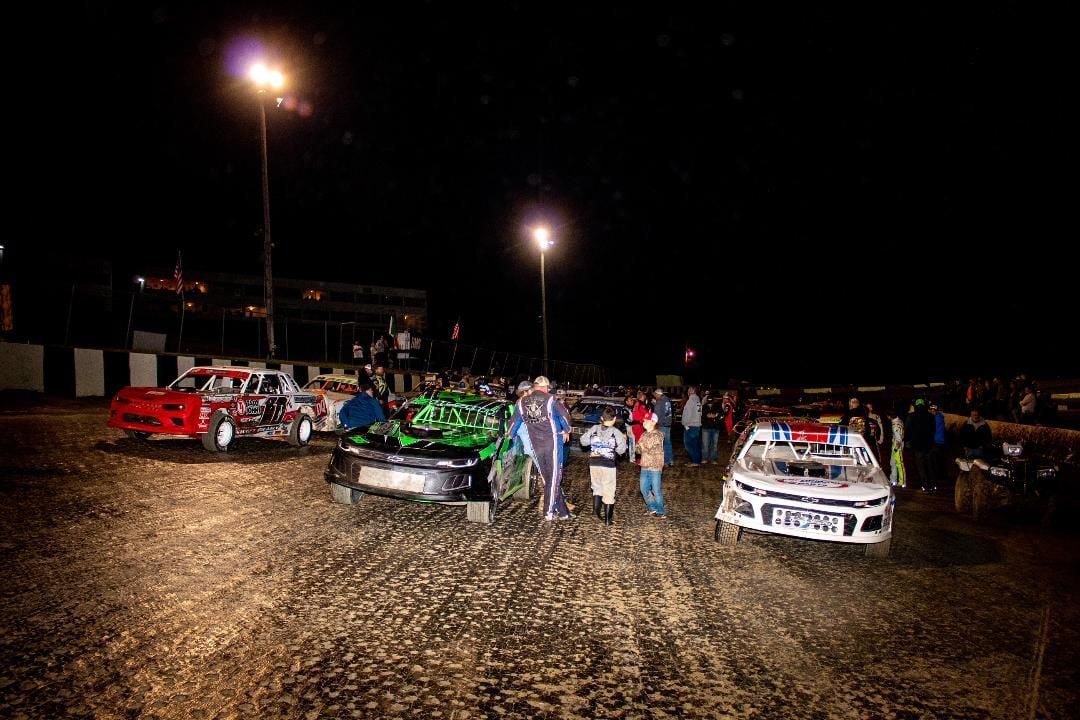 The drivers featured in the $50,000 A-main race on Saturday night visit before the race.

A wreck in turns one and two took out 13 cars in the A-main feature race.

The drivers featured in the $50,000 A-main race on Saturday night visit before the race.

LOCUST GROVE — When Green Bay, Wisconsin’s Benji LaCrosse stood in victory lane and was handed a check for $50,000 from winning the IMCA World Stock Car Championship on Saturday night at Batesville Motor Speedway, he was nearly speechless.

“I don’t know what I’m going to do,” LaCrosse said as his win started to sink in and the excitement grew across his face. He might not have figured out how to spend the money yet, but LaCross figured out his way around the 3/8-mile high-banked oval while battling local favorite, Desha’s Peyton Taylor for 61 of the 71 laps.

“They were trying everything they could,” LaCrosse said. “Taylor stayed on the top for the longest time and once he pulled to the bottom, they started racing behind him. Once I got the jump out there, I ran my line. I tried to be a smooth as I could and I was checking to see if Peyton was coming in there.”

After a caution, LaCrosse had his choice which line he wanted to take on the restart after the fourth caution on lap 40.

“I had a choice of what to do...do I go high or low...so I creeped up on the track a little bit, then I noticed the track was rubbering around the corner,” LaCrosse said.

“So I decided to stick low and if Peyton gets around me, he gets around me. But as time goes on, the track was going to rubber down and then I could work by him again and it worked exactly like I thought it would.”

Taylor made a backstretch pass on LaCrosse on lap 40 and led until lap 44 when LaCrosse passed him on the restart after the fifth caution of the race.

The two raced nearly side-by-side for the next 27 laps. LaCrosse jumped out to the lead on lap 69 after the last caution flag and held off Taylor on the last lap to win.

“I wanted to try the top on the last restart, but there were only two laps left and there was too much money difference from second to fourth, so I decided to protect what I had,” Taylor said. “The air where I was running was scarce. If you messed up that close to the wall you, you will tear the whole clip off of it. I wanted to clear him actually, then cut down and take his line, but I had too much straightaway speed and couldn’t get slowed down to the speed I needed quick enough. It was wild for sure.”

LaCrosse solidified his spot in the championship on Wednesday night by finishing second in the A-main feature.

“Wednesday we made it in right away, so we didn’t do much to the car except change a spring,” he said. “We had won two $10,000 races in Minnesota and one back home with it and we ran the same exact set up. It is crazy to come and run whole different size track and have it work.”

Seventeen-year-old Dallon Murty of Chelsea, Iowa took the initial lead of the race with LaCrosse and Milan, Tennessee’s TJ Herndon who was driving for Jesse Olson. Dylan Thornton, who the A-main race on Wednesday, battled with Tom Berry, Jr. of Des Moines, Iowa for third and fourth. Berry won the Friday’s A-main feature that ran earlier on Saturday.

Taylor started eighth and by lap four, he was third and running tight with Murty and LaCrosse with Herndon following. Thornton got the worst of the passes through turns three and four by dropping three spots.

LaCrosse passed Murty on lap seven by a nose at the line, the Murty nosed ahead on lap eight when Kyle Vanover of Beatrice, Nebraska spun in turn two. On the restart, LaCrosse pushed his way past Murty and Taylor passed Murty on the back stretch to take over second place. Behind them, there was a three-wide, door-to-door battle between Berry, Derrick Agee of Huntsville Missouri and Carthage, Illionis’ Abe Huls.

Zane DeVilbiss made a charge to challenge the leaders on lap 14. DeVilbiss, who won the $50,000 Race for Hope 71 last month, made it to third before spinning on lap 16 in turn four trying to pass Murty.

LaCrosse led until the third caution came out for another spin. Murty was just ahead of Taylor for second followed by Berry, Jr., Thornton and Herndon. On the restart, Taylor passed Murty on the high side of turn two and pressured LaCrosse until Herndon and Chance Hollatz of Clear Lake, Iowa crashed in turn four on lap 38.

It took Taylor a lap to overtake LaCrosse on the backstretch on lap 40 until Elijah Zevenbergen of Ocheyedan, Iowa and Lamar, Colorado’s Angel Munoz tangled on the front stretch. LaCrosse retook the lead on lap 45.

“The biggest thing is the long sweeping corners that we don’t have at our tracks up there,” LaCrosse said. “When you come here you have to start rolling into them. It is just a lot of momentum, which I like a lot. It is pretty hard when you first get here. We are used to stopping and going on the track, but here you come and ride the brake a little big through the corners. It is a big difference. I’m definitely coming back to Batesville again, absolutely.”

The sixth caution of the race slowed action for two cars hitting the front wall, but Thornton was side-by-side with Taylor on the lap 56 restart and LaCrosse inched away. LaCrosse had almost a two car lead on Taylor until the final caution flag on lap 69.

“He (LaCrosse) showed me a lot of respect,” Taylor said. “When I was on the rim, he could have cut me off on the shute there, but he was giving me room. I felt like I owed it to him not to cut down in front of him and wreck us both. We both had good cars. He is a national champion and he is a smart racer. I was waiting for him to make a mistake, but he drove a perfect race. If he would have shoved up or bobbled once where I could have had enough room to pass him clean and take his line, it would have been over.”

After two days of rain moved Thursday’s and Friday’s racing to Saturday morning, Herndon emerged as the winner of the Thursday A-main by passing DeVilbiss on lap 16 and holding him off on restarts after two cautions.

“We had a good car,” Herndon said. “We got everything adjusted to my liking. I like the track.”

Berry, Jr. won the Friday A-main by surviving a eight cautions in the 25-lap race.

“I got really lucky,” Berry Jr. said. “I got that initial jump on the last restart and knew I had to set the pace. The track was hard on tires, so we had to be smart.”

With two days of rain that washed out racing Thursday and Friday, Mooney and Connie Starr pushed made the show happen on Saturday.

“I have been all over the country and Mooney and mom did all they could to make this happen,” Taylor said. “Most people would have canceled it, but they stuck it out and we ran 15 hours on Saturday. Big props to them for getting it in.”

It was sort of a Taylor family gathering on Saturday, too.

“I survived and that’s about the extent of it,” Jeff Taylor said.”We had a pretty good car. I don’t know if we had a winning car, but it was definitely a top 10 for sure. Earlier in the day we bent up the back end of the car in a racing deal in a heat race and there was no way we could fix it. We did the best we could and the rest of the day it was hard to drive with it being bent, but we made the A-show. I was pretty optimistic about it, because that was my goal. I picked the right line. I had a lot of fun for sure.”

Jeff Taylor was driving a car from Landon Ellis of Benton.

“There was so much focus going into it,” Peyton Taylor said. “It is a salary race that is more than some people make it a year. It was wild and I am blessed to have not wrecked. We performed and put on a show. It was give and take, clean racing, between two good drivers.”