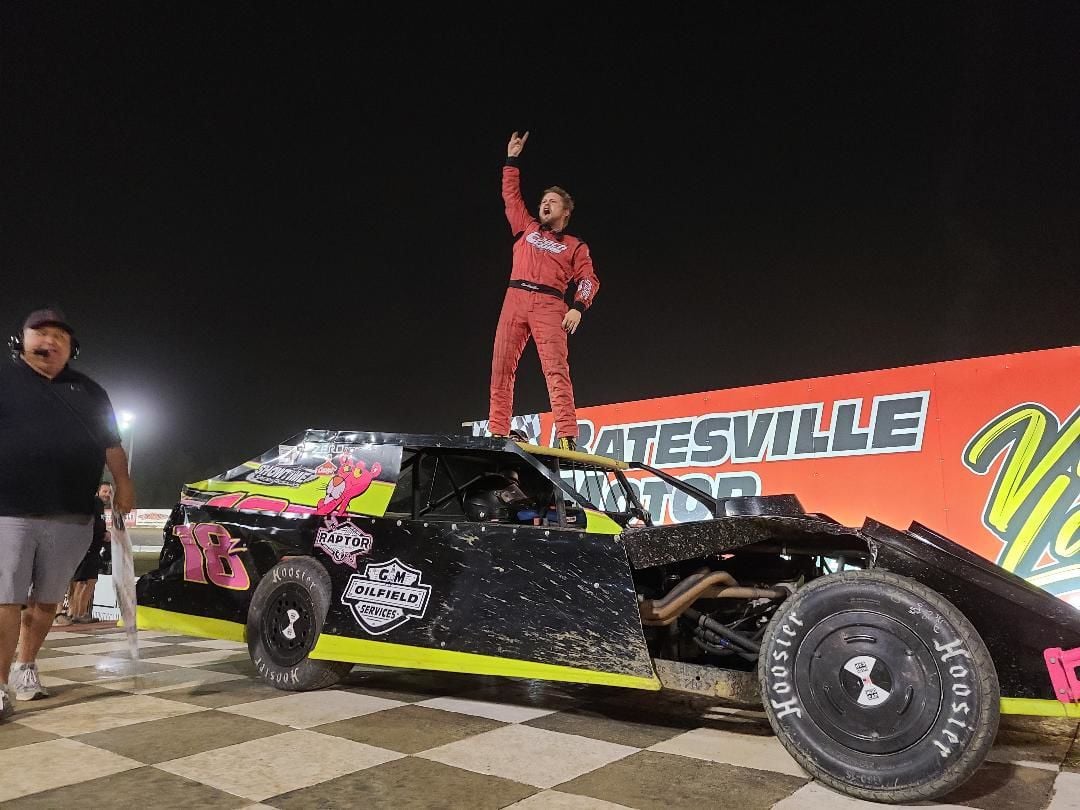 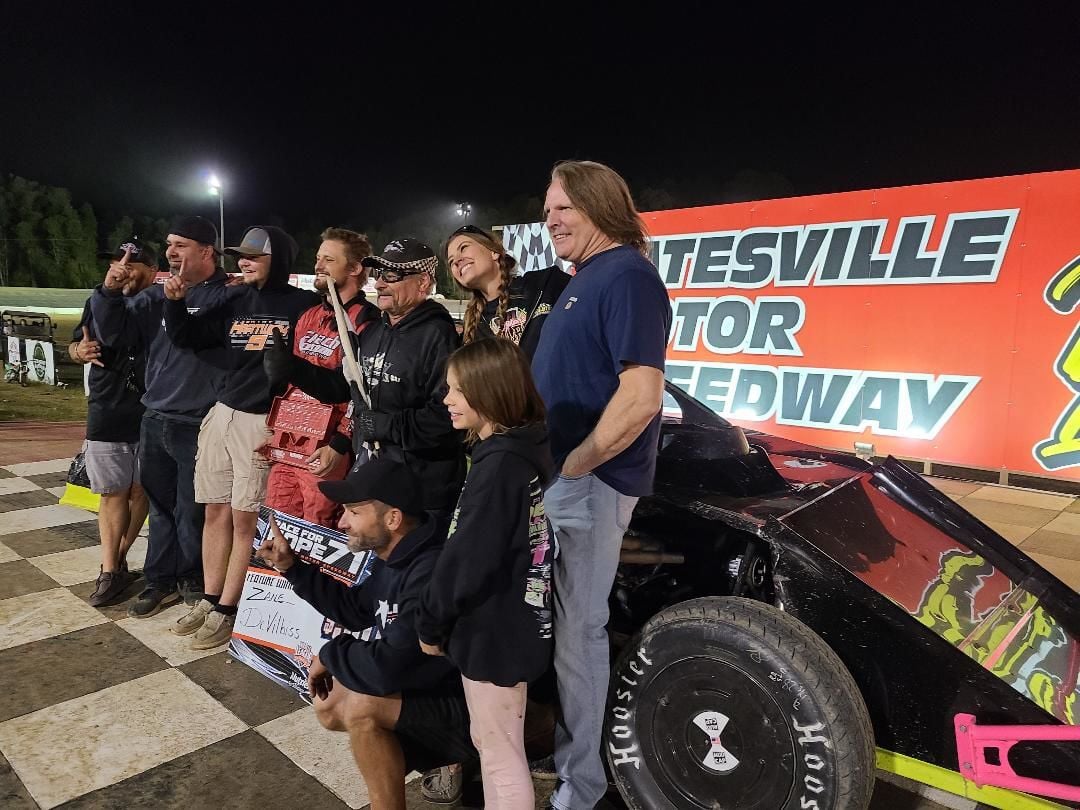 Veteran racer Scott Bloomquist joins DeVilbiss on stage for the celebration of the win at the Race for Hope 71.

Veteran racer Scott Bloomquist joins DeVilbiss on stage for the celebration of the win at the Race for Hope 71.

When the moon rose over the hills around Batesville Motor Speedway on Saturday night, 30 IMCA Modified drivers cranked their engines in the 5th Annual Race for Hope 71 main event for a $50,000 grand prize.

Three long days of heat racing and qualifying races, culminated in a 71-lap feature that saw early week A-main winners Ethan Dotson, Zane DeVilbiss and Terry Phillips headed the field with a three-wide parade lap. When racing began, DeVilbiss made a final pass for the lead on a low dive to the inside on lap 55 of a lapped car that was holding up Phillips on the backstretch.

DeVilbiss survived two caution and restarted by driving away in the final 11 laps to claim his first Race for Hope 71 victory on the 3/8-mile clay oval track.

“This was the biggest race of may career,” said the two-time IMCA national champion from Farmington, New Mexico. “We had an awesome car the whole race. We have had so many people that have helped us all week long. Without all of them, I couldn’t do this.They put together a pretty level playing ground here.”

Dotson, DeVilbiss and Phillips battled for the lead with DeVilbiss taking an advantage on lap 3. Dotson passed him the backstretch and led until DeVilbiss closed in and made a turn 2 pass on lap 12. Phillips followed DeVilbiss through for second and those two stayed door-to-door, until DeVilbiss took the lead by a half-car length before a caution put him back into second.

Three-wide battles ensued throughout the field for the first 20 laps of the race. Batesville’s Peyton Taylor and his older brother Jeff Taylor, from Cave City, stayed within striking distance of the leaders fighting for fourth, fifth and sixth with Lakewood, Colorado’s Tripp Gaylord and Plattsmouth, Nebraska’s Jacob Hobscheidt.

The first caution came out when Batesville Roger Whitt spun on lap 21. On the restart, Phillips, Dotson and Gaylord emerged out front followed by DeVilbiss, Hobscheidt and Peyton Taylor.

Phillips moved out to as much as a 10-car lead before the second caution came out on lap 26 for an incident in turn 4 involving Batesville’s Adam Maple and Kollin Hibdon of Pahrump, Nevada.

DeVilbiss dove to the inside of two cars on the restart in the first turn and got to the bumper of Phillips. Phillips maintained his advantage for the next 15 laps, while Dotson and Gaylord fought back and forth for third place, and Jeff Taylor appeared into the top five by passing Green Bay, Wisc. Benji LaCrosse on lap 31.

As the top two started to make their way through lap traffic, before the mandatory caution came out to fuel the field with Phillips holding the advantage.

Dotson’s car started billowing smoke from its’ rear end during the caution pace lap before the restart. He stopped in the pit area to check it and returned to his position before the green flag.

Three-win racing through the first two turns and down the backstretch saw Peyton Taylor pass Hobscheit on the inside of turn 3. Phillips continued to lead until Dotson’s car blew up on lap 44.

The top six through the next three laps consistently stayed Phillips, DeVilbiss, Gaylord, Hobscheidt, Peyton Taylor and Jeff Taylor. On lap 48, Peyton Taylor made a pass on Hobsciedt for fourth place. In the meantime, DeVilbiss was pressing Phillips for the lead.

The two front runners were side-by-side for most of five laps with both inching out to short leads on the backstretch. They were door to door crossing the line on lap 54 and DeVilbiss made his move to the inside for the lead on lap 55.

Racing was halted for a red flag on lap 60 when Cedar Falls, Iowa’s Jeff Aikey, Floral, Arkansas’ Brandon Smith and Whitt were involved in a crash at the pit entrance inside wall entering turn 3. Whitt’s car was destroyed and after being pushed down into the barriers from three wide racing.

Jesse Sobbing of Malvern, Iowa spun in turn 2 on the restart just as DeVilbiss was edging out to a car-length lead. The field reset and DeVilbiss took off on the start and cruised to as much as a five-car lead before for five laps until Jeff Taylor, who was running fourth ahead of Peyton Taylor, had an engine issue and retired from the race.

DeVilbiss cleared the field on the restart and for the remaining laps. Phillips was second, Gaylord was third and Peyton Taylor was fourth.

“We put together a car with Bloomer (Scott Bloomquist) and it was just fun to drive,” DeVilbiss said. “This is awesome. I didn’t know exactly when I took the lead, all I knew is that I wanted to be leading on lap 71. I love this place and I will be back in two weeks to try for another 50 thousand.”

After a caution for a spin in by Jim “Pappie” Leonard of Ravenden, Arkansas on lap 8. Brooks led on the restart, while Cameron Rank of Fairdealing, Missouri and Amity, Arkansas’ Troy Schaberg battled for second.

Brooks won by six car lengths, Rank was second and Schaberg was third.

“Well it wasn’t the A-main,” Brooks joked in victory lane. “I hate it that we broke on Friday night. We’ve had a good car all week and there are lots of good racers here. It was the starting of a good night, it is just too bad that is already over for me. It is a shame we couldn’t go to the A, but that is my own deal. It was a lot fun.”

With a chance to qualify for the A-main race on Saturday night by winning the B-main race was more incentive for Delta, Colorado’s Ricky Alvarado.

Alvarado led Batesville’s Ashton Wilkey and Richie Tosh of Salado, Arkansas. A spin in turn 4 on lap 2 from Eddie Belac of Avarda, Colorado slowed the race, but on the restart Alvarado was on point ahead of Pacifica, California’s Shane DeVolder and Wilkey.

Another caution lap 5 when Astin Harnick of Clair, Michigan, Joey Gee of Bald Knob and Travis Mosley of Batesville got tangled. Alvarado took the lead on the restart and Wilkey passed DeVolder for second. Tosh moved up to third on a lap 10 pass of DeVolder and eventually took Wilkey on lap 13.

Alvarado led going away for the next 12 laps to qualify for the A-main feature.

“We made the main every night by qualifying out of the heat races and we made some changes to get to this point,” Alvarado said. “We didn’t run well in the other features and I was happy with the changes that we made. On the restarts, I was trying to keep my head clear and focus on my line.”

Marcus Yarie of Wausau, Wisconsin battled veteran NASCAR driver Ken Schrader for the lead through most of the first five laps of the C-feature race.

Schrader led for two laps, but hit the outside wall in turn 2 on lap five and Yarie passed him for the lead. Schrader retired from the race. Spencer Hartwick of Quitman put pressure on Yarie for a moment, bit Yarie stretch out his lead and caught up with lap traffic by lap 12.

Eric Perry of Little Rock spun in turn 4 on lap 15. On the restart, Yarie jumped out front, while Matthew Hagio of Prundale, California, Hartwick and Lawrence O’Conner of Port Harty, British Columbia battled for the second through fifth spots, going three-wide at times through turn 2.

Yarie widened his margin until Clay Norris of Searcy hit the turn 3 wall on lap 18. Yarie got a slim lead on Hagio on the restart and stayed in front. Yarie developed a problem with his steering and held on to nose out Hagio by a 1000th of an inch for the win.

“After that caution when we were in lap traffic, I was pushing pretty hard and it felt like we lost the right front tire, it wasn’t turning as good,” Yari said. “It wasn’t turning like I wanted it to into the corner and I thought we were going to give it away there at the end. I love coming down here. We just didn’t have a good draw this week and had some misfortune that set us back. We made this race several times, but this year it was just bad luck, but I will take the win.”