Skip to main content
You have permission to edit this article.
Edit
Home
News
Sports
Obituaries
Local Events
e-Edition
Classifieds
Share This
1 of 4 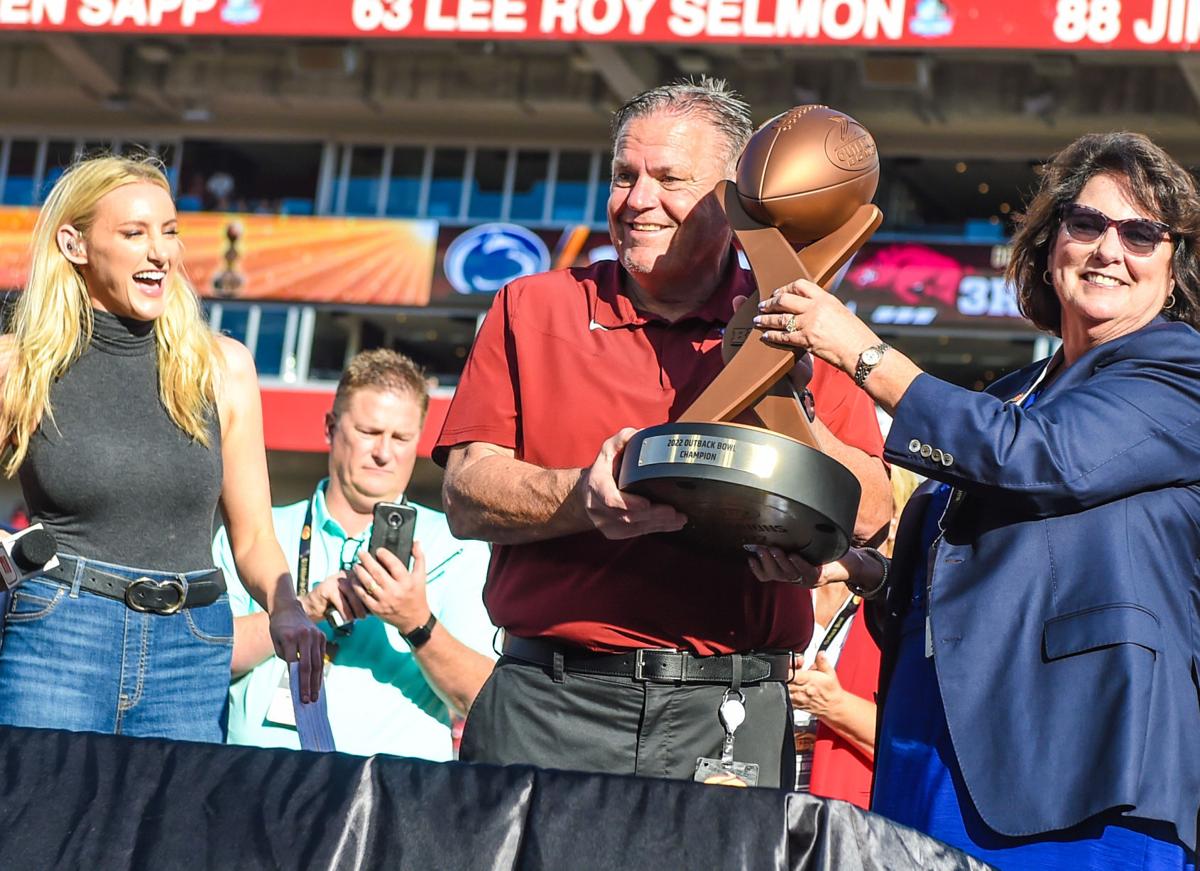 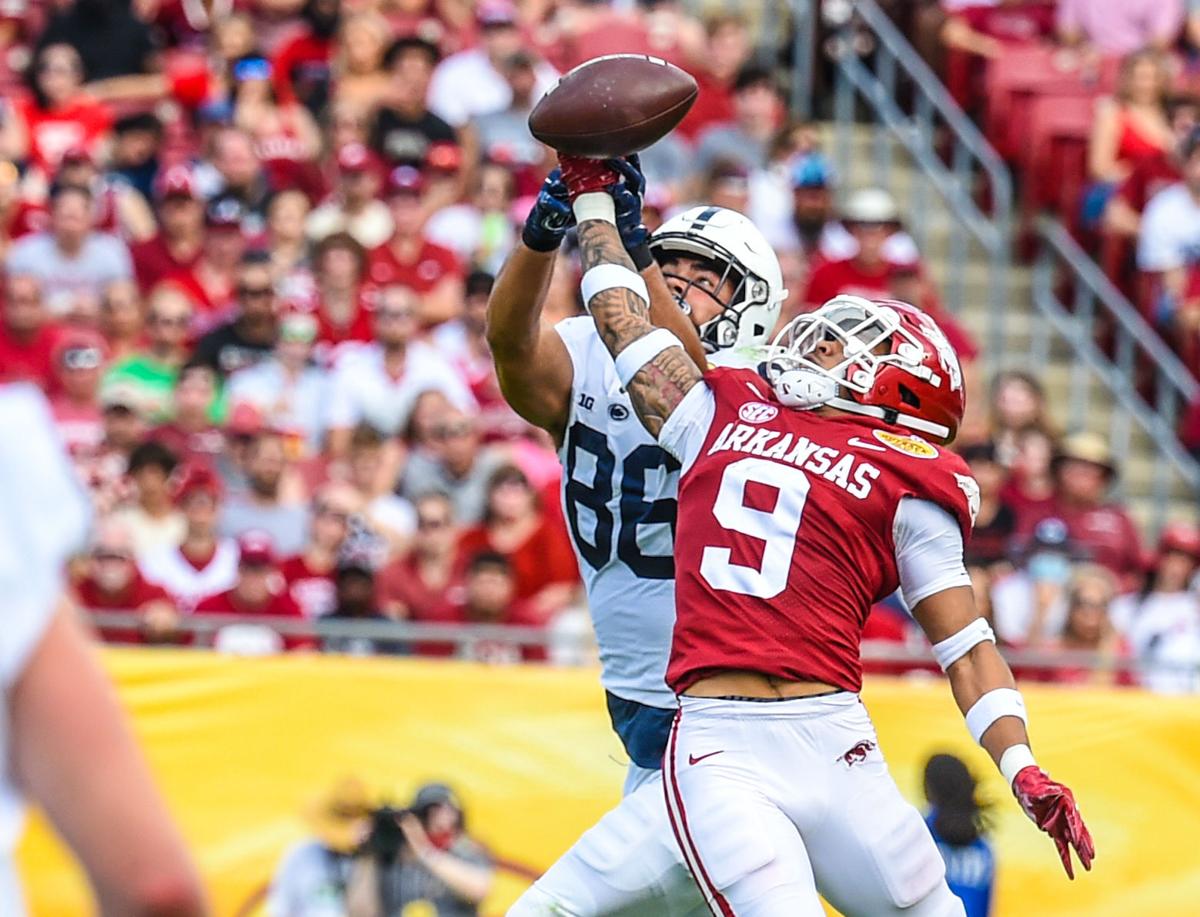 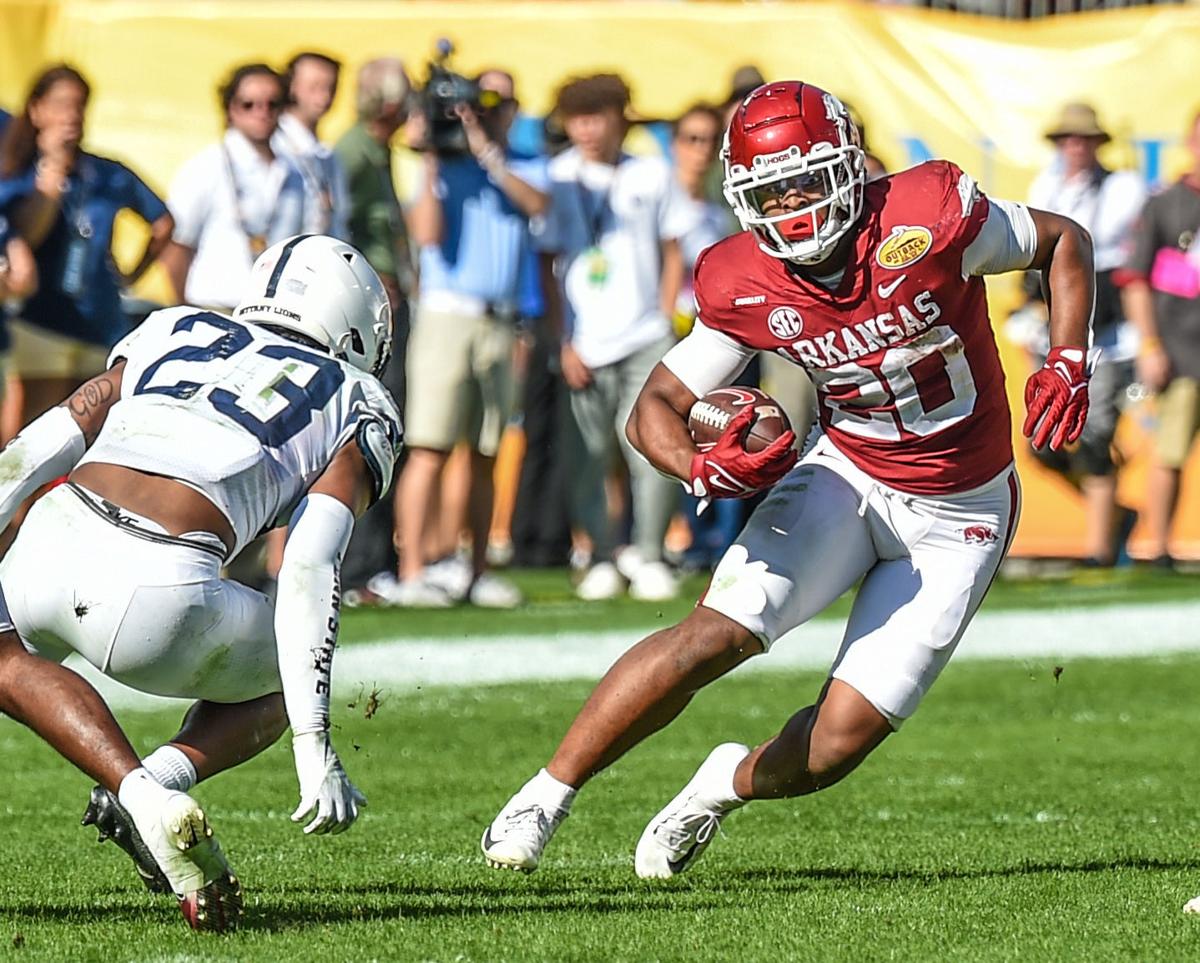 Razorback sophomore running back Dominique Johnson (20) from Crowley, TX runs for a first down. 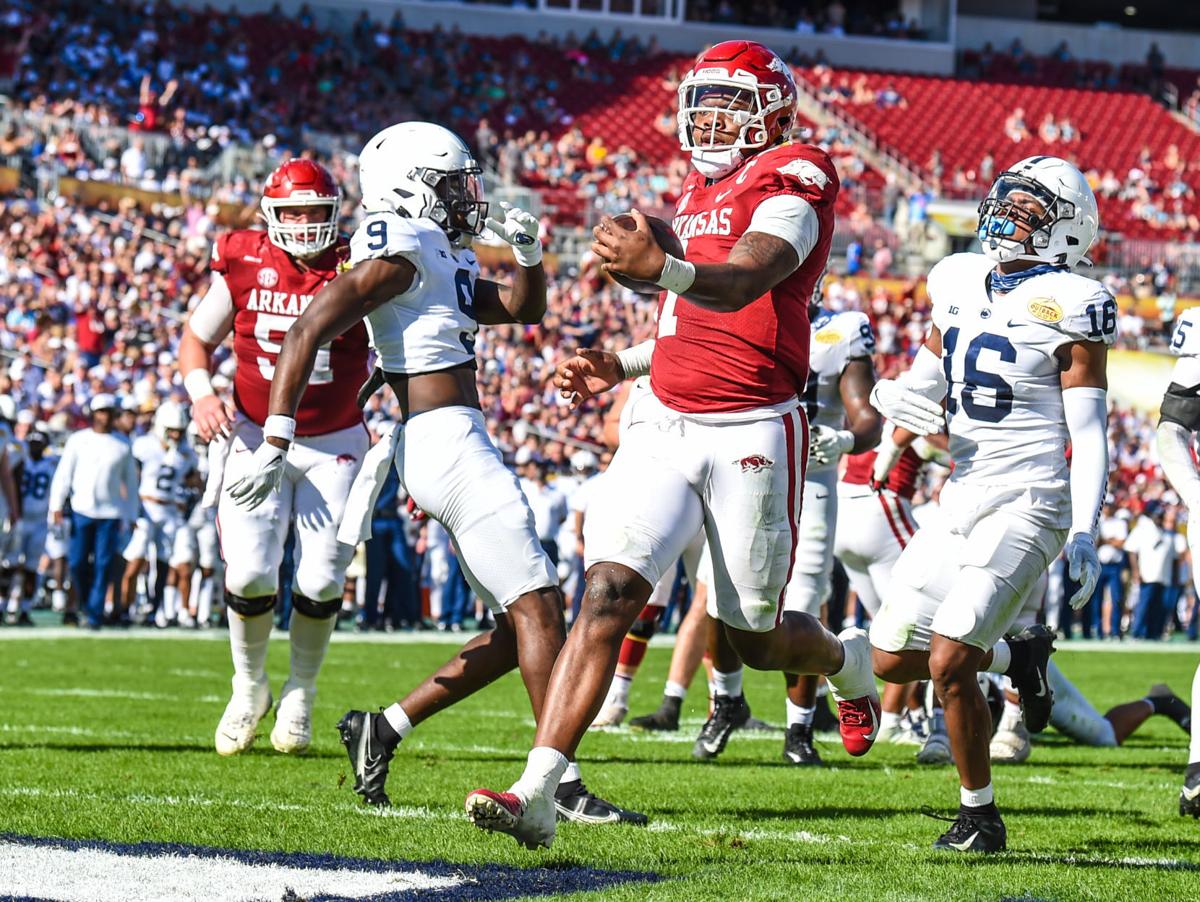 Razorback sophomore quarterback KJ Jefferson (1) from Sardis, Miss. splits the defense for a touchdown Saturday afternoon against Penn State at The Outback Bowl in Tampa, FL.

Razorback sophomore running back Dominique Johnson (20) from Crowley, TX runs for a first down.

Razorback sophomore quarterback KJ Jefferson (1) from Sardis, Miss. splits the defense for a touchdown Saturday afternoon against Penn State at The Outback Bowl in Tampa, FL.

FAYETTEVILLE — At intermission of Saturday’s Outback Bowl vs. Penn State in Tampa, Fla. Sam Pittman reminded his Razorbacks they’d been here before though they never previously played Penn State, or in Tampa or at a bowl game.

But they had been here before.

The Razorbacks in general and Outback Bowl MVP quarterback KJ Jefferson in particular second-half rallied from 10-7 to pound Penn State, 24-10 closing the season much like they opened second half rallying from down 10-7 to rout Rice, 38-17 Sept. 4 at Reynolds Razorback Stadium in Fayetteville.

“I talked to them that we were down 10-7 against Rice,” Pittman said on postgame ESPN2 TV. “Let’s not make a mountain out of a molehill. Hey, we can’t play worse than we did in the first half. So let’s just go out and have fun. We did and made the adjustments and played really hard.”

And beat not merely a Conference USA team like Rice, they were heavily favored to beat, but traditional Big Ten power Penn State representing the league that was 4-0 against Arkansas in bowl games.

Not that these 7-6 Nittany Lions are up to the vintage Penn State of the late Joe Paterno and Rip Engle eras. They played Saturday minus five defensive starters plus top receiver Jahan Dotson all turned pro early declared for the NFL draft while Arkansas was without All-SEC first-team receiver Treylon Burks and senior leading pass-rushing defensive end Tre Williams both turned pro before the bowl.

“They had six guys that went early in the NFL and we had two,” Pittman said.

And no inkling in these covid times whether any but the turning pro at the last would opt out or be forced out.

For a half Franklin’s Nittany Lions outplayed Arkansas.

But just like vs. Rice as Pittman and offensive coordinator Kendal Briles first half saw Jefferson struggling to win on his passing arm, they hinged the second half to Jefferson’s legs.

Arkansas so controlled the second half with its running game that Jefferson, 14 of 19, for 90 yards, only attempted five second-half passes.

“The biggest adjustment we made at halftime was the running game,” Pittman said. “We figured out what they were doing and tried to make that adjustment. Need to run KJ a little bit more. Things like that we answered. The O-line to step up.”

Jefferson knew what he had to do.

“Coach Briles pulled me to the side and was ‘At some point you’ve got to take over the game and put the game in your hands.’” Jefferson recalled of his offensive coordinator and quarterbacks coach. “We’ve got to put our best foot forward, score points and win the game. That’s what it was.”

The second-half offensive line stepped up right away with seven running plays, four by Jefferson, and three by running back Dominique Johnson, netting a 7-play, 75-yard drive for seven points.

It set up Sanders’ 1-yard touchdown. Sanders, 13 carries for 79 yards, netted two touchdowns, scoring from the 3 when Arkansas took a 7-0 first quarter lead.

Johnson netted 85 yards on 11 carries, and on four carries each, Hornsby netted 67 yards and running back AJ Green 26 and consumed second half clock.

And it starts with Jefferson.

They believed Jefferson would overcome in the first half both throwing his first interception since October and receiver Warren Thompson’s trick play pass become first-half ending interception depriving kicker Little the chance to deliver a 10-10 halftime score.

They all believed in an defense that, if not for busted coverage on Penn State’ quarterback Sean Clifford’s 42-yard wide open down the middle touchdown pass to receiver KeAndre Lambert-Smith would have first half held Penn State just to Jake Pinegar’s 43-yard second-quarter field goal after missing from 50 ending the game’s opening drive.

For the second half Arkansas’ defense pitched a shutout. Senior safety Joe Foucha, one of the safeties involved in the Clifford to Lambert-Smith coverage bust, more than atoned. Foucha, a game-leading six tackles including a key sack on a safety blitz all but cinched the outcome in the fourth quarter. Foucha spotted Clifford fixated on a already well covered by safety Simeon Blair.

Foucha arrived in time to filch the pass that had nowhere else to go.

“I saw him stare the receiver down and I kind of baited him like I was going to go to the post,” Foucha said. “But I turned back because he was starting the receiver down. I just went up and got the ball.”

The second half shutout stymied Clifford though the resilient Penn State quarterback never gave up until medically advised to retire from the game during the fourth quarter.

“That’s one competitive son of a gun” Pittman said.

Pittman marveled that selfless senior linebackers Grant Morgan, Hayden Henry and Bumper Pool alternating the last two years at two positions, got to play in a 3-linebacker formation that defensive coordinator Barry Odom installed for their final game together.

“It’s amazing how those three guys rotate and love each other,” Pittman said. “Never happens like that. There’s always one not liking another but not those guys. Barry put that three linebacker set in and they got to play together and it was great to see.”

“To be Outback Champions with nine wins I’m really proud of what we accomplished,” Pittman said. “We’re in the SEC West right where Arkansas belongs and we’re starting to prove that.”