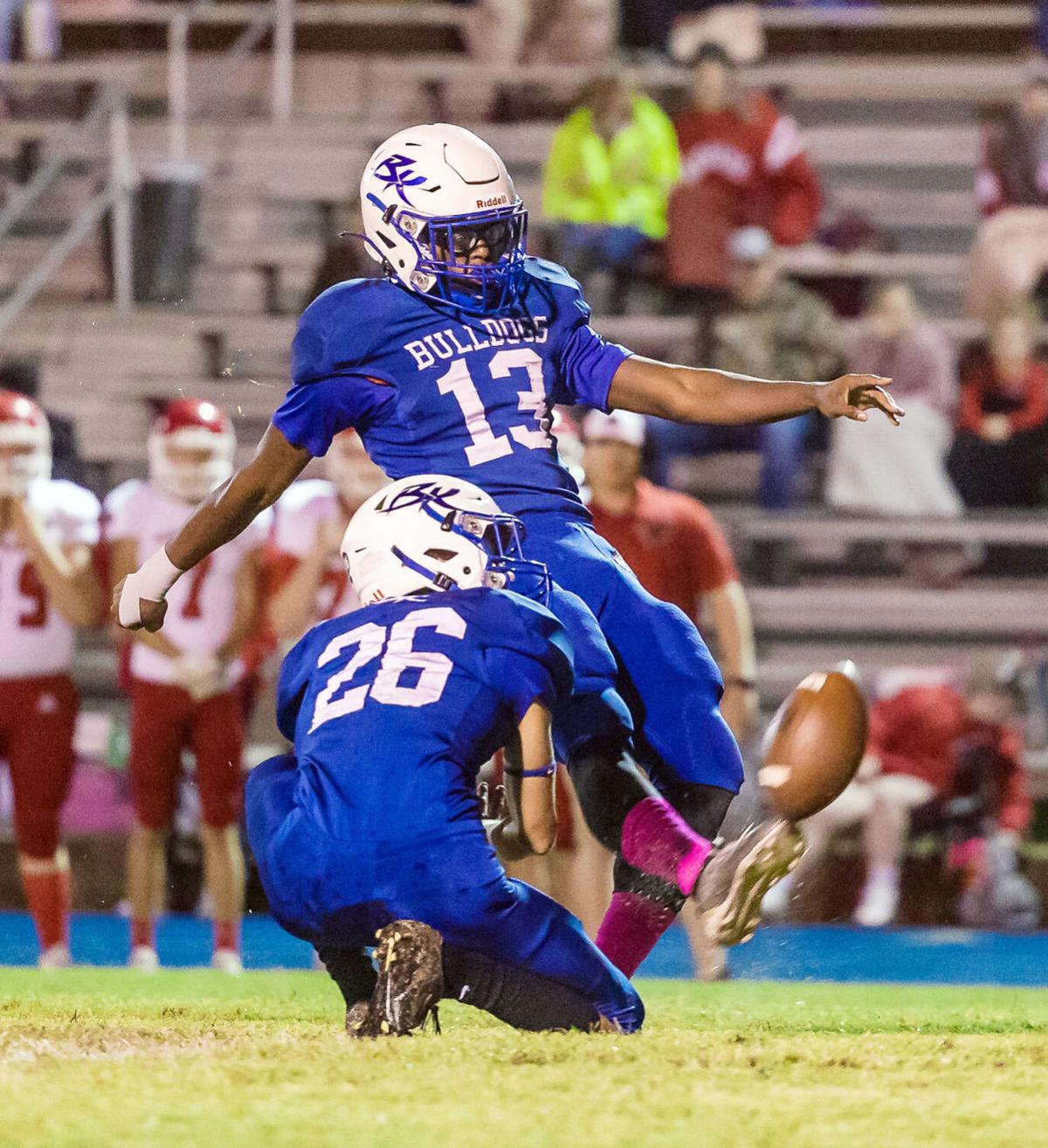 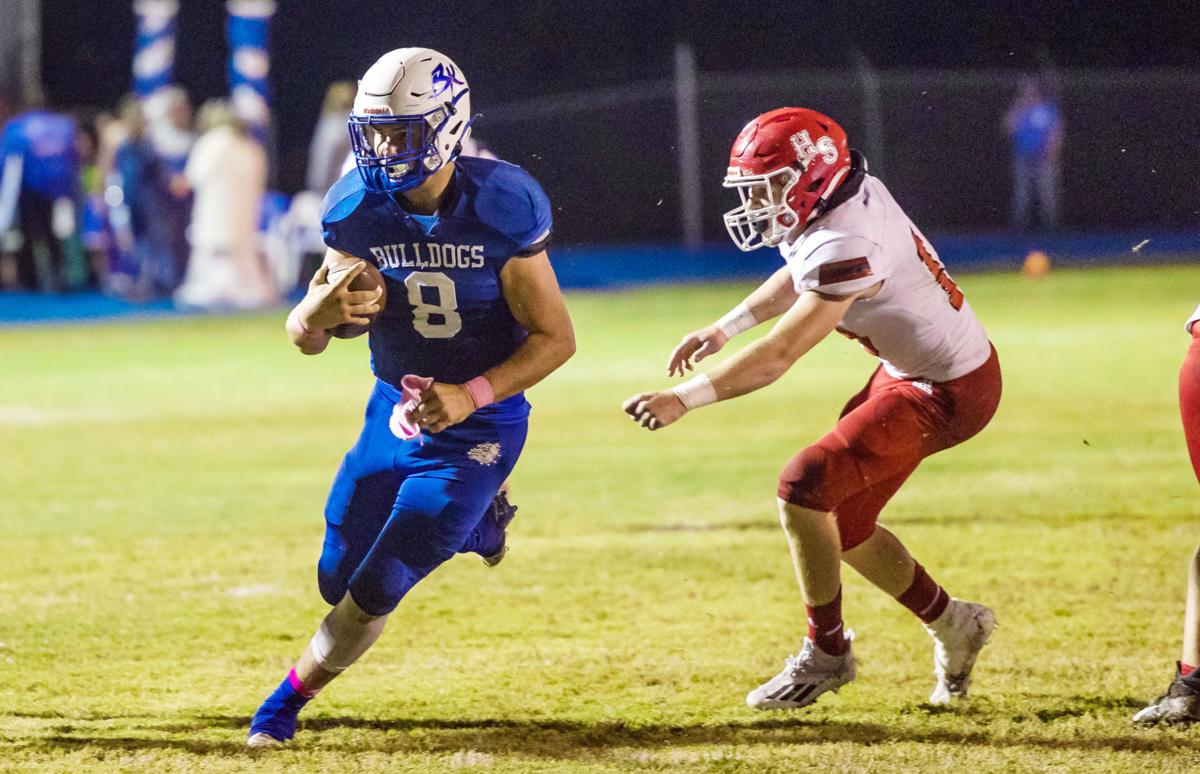 Bald Knob quarterback Leason Pierce heads into the end zone for a touchdown during the Bulldogs’ loss to Heber Springs on Friday night.

Bald Knob quarterback Leason Pierce heads into the end zone for a touchdown during the Bulldogs’ loss to Heber Springs on Friday night.

That is all that Bald Knob coach Lonnie Roberson is asking for – just one win for the Bulldogs and it would have been a special time for the Bulldogs to earn the win celebrating homecoming.

At the beginning of the football season, Robertson had his sights on winning the 4A-2 Conference title and then watch the Bulldogs make a decent run during the State of Arkansas football tournament. Now he would just settle for just one win, something that his team could use to build some momentum.

Heber Springs scored the winning touchdown with 15 seconds in regulation and defeated the Bulldogs 14-7, extending the losing streak this season to seven games for Bald Knob.

The offensive game plan for the Bulldogs was to maintain possession of the football with a solid running running game led by senior quarterback Leason Pierce.

In the first half of the football game the Bulldogs gained 75 yards of total offense and scored the only points of the half with 9:07 remaining in the second quarter and they took the lead into the locker room at halftime.

The offense for the Bulldogs finished the game with 174 yards of total offense, with 161 yards running the football, including Pierce 26 carries for 107 yards and one touchdown run.

“We kind of go as he goes,” Roberson said. “He is always a threat to run but he throws a pretty good deep ball.”

Heber Springs coach Todd Wood and his coaching staff made a couple of adjustments to the Panthers’ defense and that created some confusion on the line of scrimmage. Wood brought his safety up into the box with a 9-man front and then disguised the pass coverage defense.

There were more blitz packages that were called by Wood that kept the pressure on the Bulldogs offensive line which forced Pierce’s timing to be off trying throwing the football, he only completed one pass for 13 yards for the game.

The defense for the Panthers came up with the biggest play of the game, Wood was hoping for just a good defensive stop by his squad but instead his defense produced a turnover and it produced instant points for Heber Springs.

With the football on the 28-yard line, Pierce brought his offense to the line of scrimmage, he looked over the defense, he recognized the coverage and rolled to his left with the ball looking for wide receiver Samuel Brewster. He ran the pass route correctly, he was open and Pierce threw to the target.

Brewster jumped for the ball, he had beaten the defender but the ball slipped through his hands and ricochet off of his shoulder pad and bounced into the air away from Brewster and fell into the empty hands of Panther’s junior defensive back Kenyan Sneed.

Sneed tucked the ball away, looked downfield and then he ran 53-yards with nothing but wet green grass and the end zone in front of him, to tie the game.

“It was the turn of the game, they would fly to the ball and that is what they did tonight,” Wood said about his defense and the interception by Sneed. “They put us in the position to win the ball game. You want a stop but instead you get a pick for six, it was the turning point of the game.”

Bald Knob’s defense forced the Panthers into three turnovers, sacked quarterback Easton Cusick three times and was able to hold the Panthers to a total of 145 yards of total offense. Cusick came in the first quarter after starter Xander Lindley suffered an ankle injury.

After the game and the handshakes, Roberson’s team gathered at the 30-yard line and the raw emotions of disappointment was felt by each coach and by all of the players. Their tears, blood and sweat fell onto the muddy grass. Roberson cleared his throat and rubbed his eyes too, as he calmly told his players that he was proud of each and every one of them.

“I can’t be more proud of the ways these guys fought tonight,” Roberson said. “Obviously, when it got down to the end of the game , they were tired and we made some mistakes. We let them off the hook.”

Bald Knob plays at Clinton on Friday. Kickoff is set for 7 p.m.