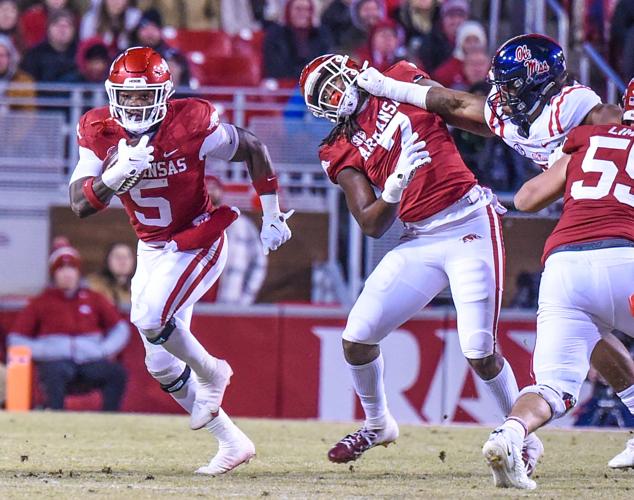 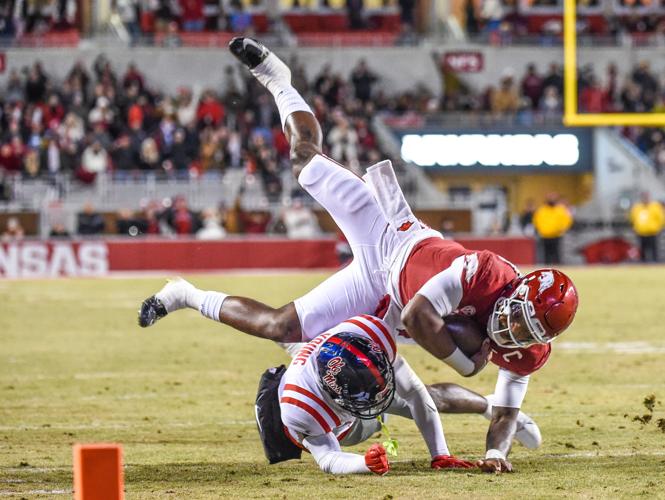 FAYETTEVILLE — Arkansas is now bowl eligible following a dominating 42-27 win over No. 14 Ole Miss in Razorback Stadium with 71,365 fans in attendance for senior night.

The Hogs led 35-6 at halftime and then scored on the second play of the third quarter to take complete control of the game. Ole Miss scored 21 points in the fourth quarter, but it was too little too late as the outcome of the game was never in doubt. Sam Pittman was excited to get the win.

“I’m so happy for the kids and the coaching staff,” Pittman said. “What a nice job they did. We beat a good team tonight. A really good football team but our kids were ready to play. And when you win three to nothing in the turnovers and you run the ball like Rocket (Sanders) and them guys did it was just a really great team effort.

“Our defense was bending but didn’t break and it was 42-6 when they finally started scoring. We played a heck of a football game. We’re bowl eligible for a third year in a row and that feels unbelievably good.”

Rocket Sanders and the running backs were challenged by Pittman earlier in the week and the sophomore took it to heart. He rushed 24 times for 232 yards and three touchdowns. It was his 68-yard sprint on the second play of the third quarter that allowed the Hogs to seize complete control of the game. That was his third touchdown of the game and put the Razorbacks up 42-6.

It was quarterback KJ Jefferson and wide receiver Matt Landers who dug the early hole for Ole Miss. On Arkansas’ second possession of the game, Jefferson took the Hogs on a seven-play, 69-yard drive that ended with him throwing an 8-yard touchdown pass to Landers with 8:28 remaining in the opening quarter. The big play prior to the touchdown was Jefferson racing 23 yards to the Ole Miss 8.

On Arkansas’ next possession, the Hogs drove 73 yards in eight plays. The drive ended with Jefferson tossing a 23-yard touchdown pass to Landers. The Hogs were up 14-0 with 3:44 remaining in the opening quarter. Pittman talked about Jefferson setting the tone for the offense.

“But we weren’t playing great up front at the beginning of the game. We were trying to figure them out and KJ was just making plays. And then after that our offensive line took over until the (second half) scoring. We’ve got to finish better. We were up, 42-6. We’ve got to finish better make some more first downs. But those are tough because they know you are not going to throw the ball as much as you had before.”

After Jonathan Cruz hit a 45-yard field goal for the Rebels, Jefferson the Hogs struck again. Jefferson threw a 20-yard touchdown to wide receiver Ketron Jackson for a 21-3 lead with 14:03 remaining in the first half. Once again, the big plays on the seven-play, 75-yard drive were a 28-yard run by Sanders and 20 by Jefferson.

Ole Miss added another Cruz field goal, this one form 32-yards away, with 4:38 remaining before halftime.

Following the field goal by Cruz, Arkansas took the ball 75 yards again this time in seven plays. Sanders appeared to score on a 50-yard touchdown run, but a holding penalty wiped it out. But following the penalty then Sanders had successive runs of 22, eight and 20 to get the touchdown. His 20-yard touchdown run put the Hogs up 28-6 with 2:20 showing before intermission. Pittman talked about Sanders and the Hogs being able to overcome the holding penalty and score.

“That was really big because a lot of times you get a run like that, and it gets called back for holding, then you miss a field goal, sacked, you’re not in field goal range, and our kids in two plays blocked it up and came back and scored,” Pittman said. “I thought that was big. I think this was our first really complete game this year. It was a complete game. I think it says a lot about our team. We were focused and ready to go and our coaches did a great job of getting them ready.”

But the Hogs weren’t finished. Linebacker Drew Sanders picked off a Jaxson Dart pass and returned it to the Ole Miss 48. Sanders capped off a six-play, 48-yard drive with an 8-yard touchdown run with five seconds remaining in the first half.

In the fourth quarter, Ole Miss scored three touchdowns. The first one was a 1-yard run by Quinshon Judkins with 14:02 remaining in the game. The two-point conversion was no good.

Ole Miss followed that up with a 48-yard run for a touchdown by tailback Zach Evans on its next possession. Dart passed for two points and Arkansas then led 42-20. With 2:55 remaining in the game, Dart threw a 13-yard touchdown pass to wide receiver Malik Heath for the final score of the game. Ole Miss tried onside kicks after its last two touchdowns, but Arkansas recovered both.

Jefferson returned after missing the LSU game. He was 17 of 22 passes for 168 yards and three touchdowns. He also added 47 yards on eight rushes. The Hogs finished with 503 yards of total offense including 335 rushing.

Arkansas (6-5. 3-4) will travel to Missouri for Friday’s game against the Tigers. Missouri (5-6, 2-5) defeated New Mexico State 45-14 on Saturday. They will need a win over Arkansas to become bowl eligible.

“Missouri is really good football team,” Pittman said. “They are playing really well. Really good defense. They’ll be bowl eligible if they can win next week and certainly we’re aware of that. And we can set what bowls we’re available for a little bit more by winning so we want to do that. We want to win regardless. Missouri is a rival of ours and we’ll certainly be ready for that.”

The Hogs haven’t beaten Missouri since the Tigers joined the SEC. The last time Arkansas won in Columbia Glen Rose was the head coach and the Hogs opened the 1944 season with a 7-6 win over the Tigers.

It’s not like Arkansas hasn’t had its opportunities to win in Columbia. In 2014, Arkansas lost 21-14. In 2016, Missouri overcame a large deficit to down the Razorbacks 28-24. In 2018, Missouri completely dominated Chad Morris’ lone trip to Columbia 38-0. Then in Sam Pittman’s first trip as head coach in 2020, Arkansas played without starting quarterback Feleipe Franks and lost 50-48.

In 2014, Pittman was the offensive line coach for Bret Bielema. The Hogs were coming off wins over LSU and Ole Miss by a combined 47-0. However, with quarterback Brandon Allen banged up the Razorbacks couldn’t get over the top.

“I remember the ’14 game because Brandon Allen was … I don’t know … but he was hurt now going into the game,” Pittman said. “Matter of fact, going into the game, we didn’t know if he would play. And he was sore taking center-quarterback exchanges. He just toughed it out you know. So he was hurt. I remember that. I think we were up at the half, maybe 14 or something like that. And they came back and they actually won the [East] that year if I’m not mistaken. In ’16 I had my own problems over there at Georgia you know. And I don’t know what happened.

“When we went up there last time we had a lead on them as well. Then they came back and we went for 2 and took the lead and obviously they had a nice drive there at the end. Rivalry games, it should be close games. I think we’re two pretty evenly matched teams. Coach (Eli) Drinkwitz does a great job. I don’t know what it is, to be honest with you. Each year is a little bit different. It seems like the results have been the same up there. But I think our kids will be ready. I’m sure Missouri will be because of bowl eligibility.”

Last year, Arkansas won all its trophy games. This season, both Texas A&M and LSU defeated the Hogs to take the trophies back. This will be Arkansas’ chance to hold onto the Battle Line Rivalry trophy. Arkansas defeated Missouri 34-17 last season in Fayetteville. Pittman was asked if trophies are important to him and the team?

“No, no, they’re important,” Pittman said. “We just don’t have them. We have this one. They’re really important to our football team. I had been bringing the trophy into the team meeting, and I didn’t this one. I put a picture of it from when we won it last year. I’m trying to change the mojo on these trophies. The case doesn’t need to be empty out there.

“So obviously we’ll take the trophy up there and we hope we get it back. But no, it’s a big game. I think Missouri has a place for it in their locker room and certainly we have a place for it here. We’d love to keep it. It is a big deal.”

Kickoff Friday will be at 2:30 p.m. and televised on CBS.

Partly cloudy skies in the morning will give way to cloudy skies during the afternoon. High near 65F. Winds light and variable.

Rain likely. High 53F. Winds light and variable. Chance of rain 90%. Rainfall around a half an inch.