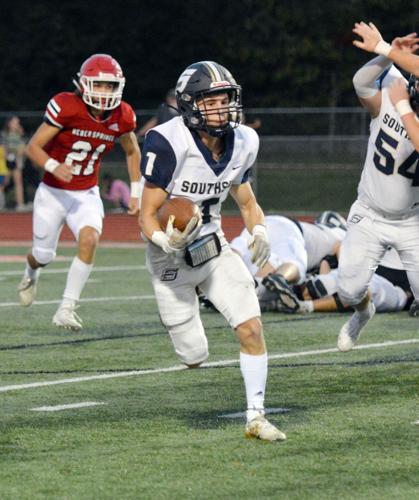 Southside’s Seth Case rushed for 242 yards in the Southerners’ win over Heber Springs on Friday. 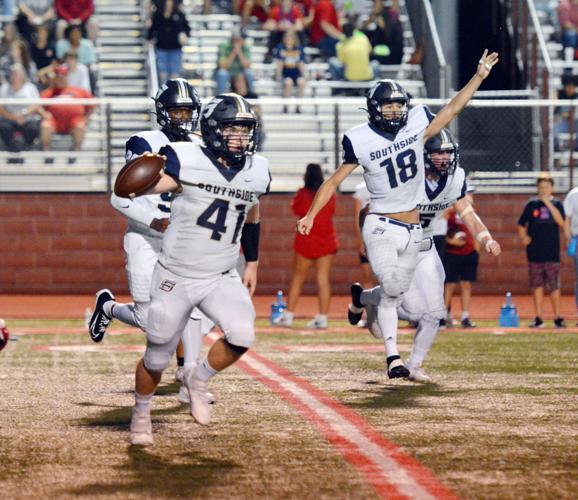 Southside’s Adam Denison runs off the field after getting an interception against Heber Springs.

Southside’s Seth Case rushed for 242 yards in the Southerners’ win over Heber Springs on Friday.

Southside’s Adam Denison runs off the field after getting an interception against Heber Springs.

The Southside Southerners won their second game in a row, beating Heber Springs 44-6 on Friday night to improve to 2-1 on the season.

Southside took a 7-0 lead with 7:55 left in the first quarter on a 64-yard run by Seth Case. Brandon Lopez kicked extra point.

The Southerners pushed the lead to 14-0 with 2:01 left in the first quarter on a 3-yard run by Louis Calhoun.

Southside led 21-0 with 8.7 seconds left in the first quarter. Chase Duncan scored on a 6-yard run.

Heber Springs got on the board with on the final play of the first half.

Southside pushed its lead back to 35 points on a 7-yard run by Pierce Duncan with 6:36 left in the third quarter.

Lopez ended the scoring by kicking a 37-yard field goal with 8:19 left in the game.

The Southerners forced five turnovers in the victory. Adam Denison and Tyler Jones each had an interception for Southside.

Isaac Wallis had 8 tackles and 2 sacks. Blane Warden and Andrew Plummer had 6 tackles each.

“It’s always good to play well,” Southside coach Kenny Simpson said. “I feel like we’ve gotten better each week the first three weeks. Offensively, we are much more crisp. Defensively, we were much more opportunistic. Heber Springs is a good team. But when you turn the ball over five times, it’s difficult to win. We were fortunate to take advantage of that. The kids played a role in that also.

“I felt our kids did a good job of understanding the situation in the game and taking advantage of that.”

Southside does not play this Friday. The Southerners open 5A-East play against Forrest City at home Sept. 23.

“We’ve got two weeks to get ready for a pretty tough Forrest City group,” Simpson said. “Hopefully, we’ll be able to do that.”