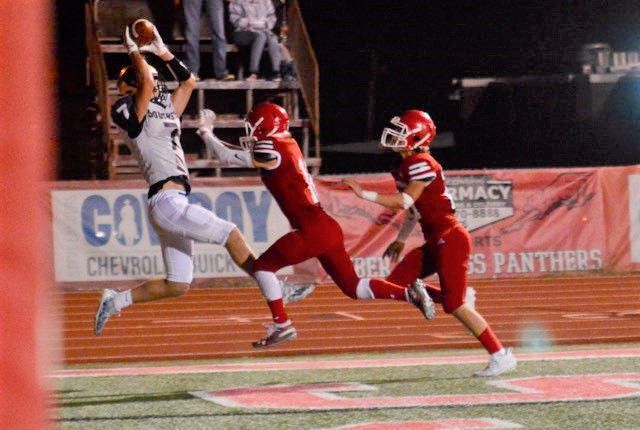 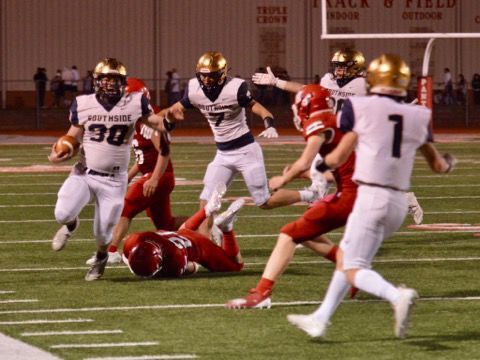 Jacob Dunne rumbles down the sidelines.

Jacob Dunne rumbles down the sidelines.

SOUTHSIDE — The Southside Southerners beat 2-4A conference rival the Heber Springs Panthers 35-7 in dominating fashion on Friday night to clinch a spot in the Class 4A state playoffs.

The Southerners (6-2, 4-1) scored outscored Heber Springs 28-0 in the second quarter and invoked the sportsmanship rule with a touchdown to begin the third quarter.

“We got off to a slow start, but we started leaning on them and pushing them up front and it got a little easier to boot the ball in the second quarter,” Southside head football coach Brian Reardon said. “We kind of exploded offensively in the quarter.”

Heber Springs started the game with the ball and found out quickly how aggressive the Southerners were defensively. Jacob Dunne got a sack on the quarterback for a loss of 12 yards and forced a long pass on third down that was intercepted by Justin Vannattan.

Southside punted on its first series of the game and Alex Allen got a sack on the Panther’s quarterback for a 10-yard loss to force another punt. After another Southerners punt Lincoln Fair got an eight-yard sack to stop Heber Springs, then Adam Denison blocked the Panthers punt and Southside recovered the ball at the Heber Springs 15 yard line.

With Landen Haas under center, Dunne ran for 10 yards and Colby Harris added a 5-yard touchdown run with 11:26 left in the second quarter. Brandon Lopez added the extra point kick for a 7-0 Southside lead.

Heber Springs went three and out and punted again. Haas had a five yard run on first down, then Seth Case broke free for a 40-yard run. Case had a seven yard run called back on a holding penalty, but broke outside and around the Heber Springs defense for a 46-yard touchdown run. Lopez added the extra point for a 14-0 lead with 7:20 to go before halftime.

Following another Heber Springs punt, Case ran for an 80-yard touchdown on first down. Lopez added the extra point for a 21-0 Southerners lead with 4:33 left in the first half. Denison got a sack for Southside’s defense on the next Panthers series and forced another punt.

Dunne broke free for a 21-yard run and Haas added six more yards. Case ran twice for gains of nine and seven yards to get the ball to the Heber Springs 14.

Harris carried for a 5-yard gain, then Haas ran for 11 yards to get the ball to the nine yard line after a Southerners holding penalty. On the next play, Haas passed to Blayne Warden for a 9-yard touchdown. Lopez added the extra point to make it 28-0 with 2.8 seconds to go in the first half.

“It is crazy how big a play a blocked punt can be,” Reardon said. “It changes the game. It was a big momentum changer and gave us great field position. It put us in scoring position, then boom we took off from there. Our defense played a good bend, but don’t break style and we had some holes in our pass coverage, because we were focused on stopping their best player, Parker Brown. And we did that.”

Harris opened the third quarter for Southside with a 15 yard run. He followed it up with an eight yard run and Duncan ran for six yards to get the ball down to the Heber Springs 1. From there Bryson Duncan scored on a 1-yard run and Lopez added the extra point to make it 35-0 and institute the sportsmanship rule.

Heber Springs scored on the last play of the game against the Southerners ninth graders who were brought up to the varsity squad for that game.

“I wanted to preserve the shutout, but I wasn’t going to put our starters back out there to do that,” Reardon said. “We did promise them a cookout for the starters and gave them some love for that one.”

“We spread the ball around running it even when it was still a game,” Reardon said. “We used seven or eight guys, because we were trying to wear them down and keep our backs fresh. I was proud of the kids.”

“Our three wins have come in the past five years, but there has been a tough history there with Heber Springs,” Reardon said. “It was on my mind. Not so much the kids, because they don’t remember those games. They used to dominate us and I kept telling them it was hard to go to Heber and win.”