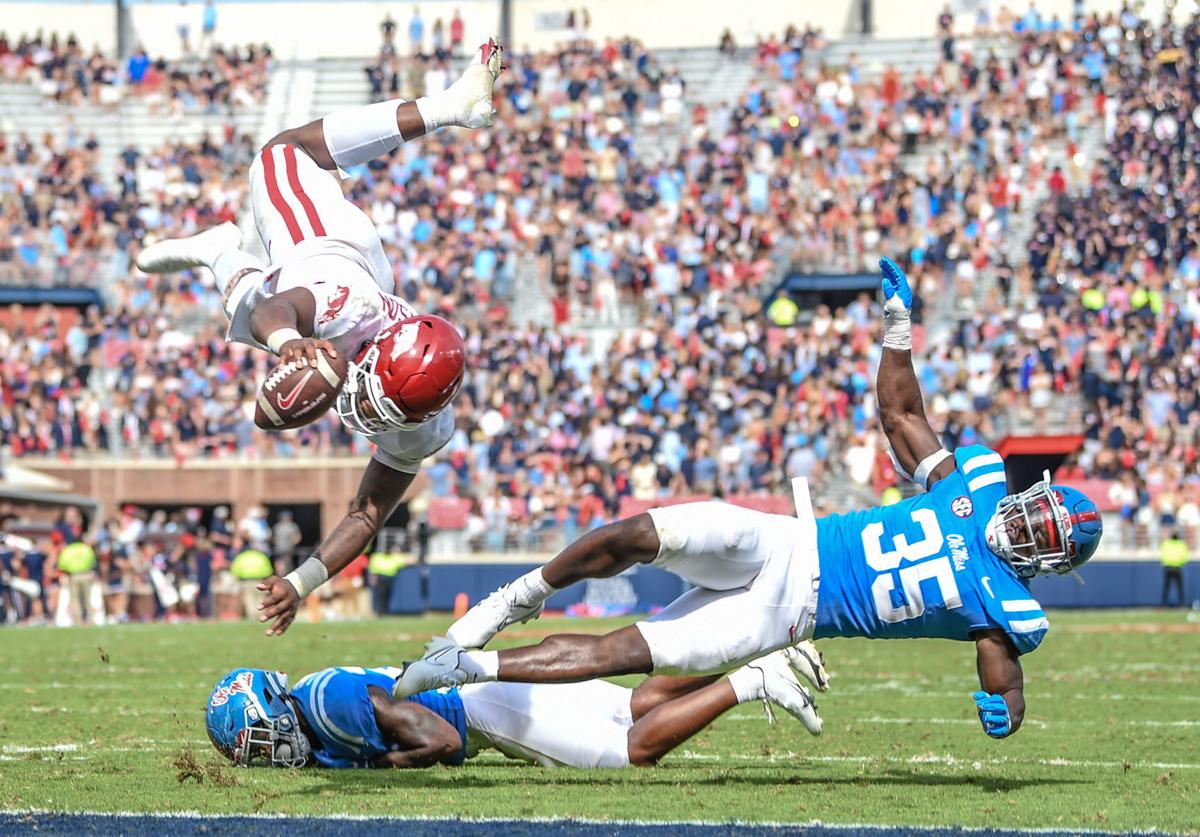 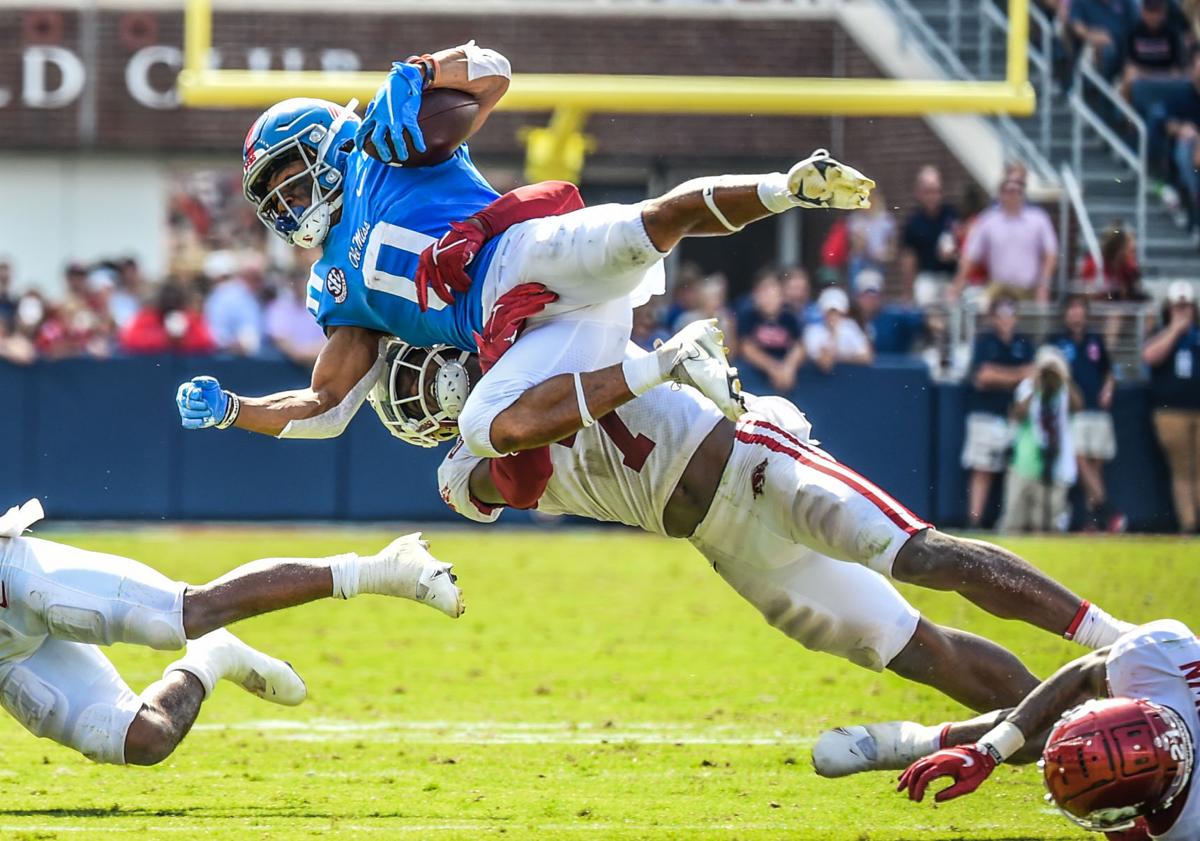 FAYETTEVILLE — Both performance no shows last week respectively routed at nationally No. 2 Georgia and at nationally No. 1 Alabama, the 13th-ranked Arkansas Razorbacks and 17th-ranked Ole Miss Rebels put on a show against each other down to the last second and beyond Saturday in Oxford, Miss.

Unfortunately for second-year Coach Sam Pittman’s Razorbacks, the beyond left them one point short.

Jefferson, taking the snap with one second left, pulled Arkansas to down 52-51 with a 9-yard touchdown pass to Warren Thompson.

That touchdown capping a 9-play 75-yard drive in the final 1:07, was Jefferson, sixth Saturday. He tallied three rushing and three passing and replied to Ole Miss taking a 52-45 lead on quarterback Matt Corral’s 68-yard touchdown pass with 1:07 left.

Jefferson, Corral and both offenses performed sensationally Saturday at Oxford.

For Pittman, the do or die chance to win on a game-ending 2-point try was an easy choice over kicking a game-tying PAT.

“I told the offense that if we score with little time left on the clock we’re going to try to win the game,” Pittman said on postgame radio of going for two. “And while I wish the outcome was different I’d do it again.”

Pittman reiterated the strategy when asked in his postgame press conference.

“ I think I’d do it 100 percent of the time in the situation that we were in,” Pittman said. “Ole Miss was just scoring, we were too, but they were scoring easily. We had to work for a little bit of ours. But theirs were coming in bunches and in a bunch of yards.”

Jefferson credited Ole Miss for changing its goal-line coverage on the 2-point try that he said took away the option of pitching to his running back.

“They came out in a different package,” Jefferson said. “They just played great coverage on on the back end. I tried it get one of my guys a play. Just throw it and let them make a play.”

Jefferson, emotionally inspired as a Sardis, Miss. native playing against Ole Miss in Mississippi for the first time, quarterbacked a juggernaut. Not just passing touchdowns to wideouts Treylon Burks (a game-leading 7 catches for 136 yards, Thompson and tight end Trey Knox, Jefferson ran for 85 yards on 20 carries. He fueled a rushing game that included running back’s Trelon Smith’s 85 yards with a touchdown on 11 carries and a game-leading 139 on 17 carries by freshman running back Raheim “Rocket” Sanders.

““Obviously on both sides running backs had big, big games,” Pittman said. “When you have to hold and hang it freezes you on the back side a lot of times for quarterback runs that when you hand it off you can get some big ones because the linebacker can’t close the gap. That’s what happened to us a few times today and then it happened to them, as well. I think that’s a big, big key.”

Neither defense could grasp a 103-point game with 1,287 yards total offense.

“Obviously we made way too many mistakes on defense,” Pittman said. “The ball got behind us several times. We didn’t tackle. Any open-field tackle, we couldn’t get the guy on the ground. That was by far our poorest day tackling. Then when we had some busts in the secondary, guys were wide-open and we couldn’t fill the gap from the safety area on a simple little stretch play.”

Field position didn’t matter to the Rebels Saturday in Oxford.

Corral threw touchdown passes of 67 and 68 yards to Dontario Drummond and Sanders. Conner’s three touchdown runs included 51 and 34-yarders plus one 1-yard plunge.

“The bottom line is we had too many mistakes defensively, and we couldn’t tackle,” Pittman said.

Or net a turnover.

Ole Miss’ defense netted two. One didn’t hurt Arkansas, a Jefferson Hail Mary in the end zone just before half.

The wind, and a potential kick-six returning looming against freshman kicker Cam Little on what would have been a plus 55-yard attempt so Pittman opted for the Hail Mary.

Little missed wide on a 50-yard attempt in the second quarter.

Little did kick a 31-yard field goal tying it 24-24 after the offense failed to touchdown capitalize on the defense stopping Ole Miss for a third-quarter loss on fourth and one from its 33.

“Obviously disappointed we couldn’t convert right there and score a touchdown, but at least we tied it up,” Pittman said. “Basically, the difference in the game was we put the ball on the ground once and missed a field goal, and they didn’t. Obviously, we didn’t convert on the 2-point. But I’m proud of our kids. I liked the grit and the fight that they had offensively, coming back to score there at the end of the game.”

The Associated Press football voters apparently recognize a classic when they see one.

So after the Ole Miss Rebels’ 52-51 down to a time expired thwarted 2-point conversion victory over Arkansas Saturday in Oxford, Miss., the voters Sunday simply traded places for the Rebels and Razorbacks.

Coach Sam Pittman’s Razorbacks dropped only from 13th to 17th while Coach Lane Kiffin’s Rebels advanced from 17th to 13th.

The previous week the voters recognized the Razorbacks and Rebels as still good teams routed by great ones. Arkansas now 4-2 overall/ 1-2 in the SEC heading into Saturday’s CBS televised 11 a.m. homecoming game against the Auburn Tigers at Reynolds Razorback Stadium, only dropped from eighth to 13th though routed by then No. 2 now now No. 1 Georgia in Athens, Ala.

Remember, beating the then No. 7 Aggies shot Arkansas’ rise into the Top 10 and started A&M falling to unranked until they stunned Alabama, 41-38 Saturday night in College Station, Texas.

Auburn, now 3-2 after flattened 34-10 last Saturday by Georgia, is the top vote getter beyond those voted into AP’s Top 25.

The Hogs of second-year Coach Pittman positively answered questions posed after they were marched upon in Georgia.

Would they mentally bounce back?

Would they curb the 13 penalties committed in Athens and in their season-opener against Rice?

Yes, they would only charged with four. Though if caught, their 2-point conversion pass would have been recalled by an ineligible receiver downfield penalty.

Other than Cam Little missing wide on a field goal – and remember 50 yards is hardly a chip shot – the Razorbacks special teams performed without the special teams problems vexing them in Athens.

Offensively, while Ole Miss quarterback Matt Corral drew deserved praise for a performance keeping his Heisman Trophy candidacy aloft, KJ Jefferson performed just as well if not better. Jefferson was just a 2-point conversion away from being victoriously judged so.

Who can knock a line bulldozing and protecting for 676 yards total offense, 350 rushing and 326 passing?

Stats like receiver Treylon Burks’ game-leading 7 catches for 136 yards and a touchdown, and running back Raheim “Rocket” Sanders’ game-leading 139 yards on 17 carries speak for themselves.

So does the Trey Knox conversion from frustrated wide receiver to productive tight end, 5 catches with a touchdown while transfer via Florida State receiver Warren Thompson, 3 catches for 46 yards and a touchdown.

Defense, the team’s strength in a 4-0 start prior visiting Georgia and Ole Miss, obviously took it on the 52-points/611 yards total offense chin.

Give Corral and his cohorts credit. They’ve been a juggernaut against all but Alabama and even scored 21 late on the Tide after down, 35-0.

But Arkansas certainly must defensively do better than its last two showings, bullied by Georgia’s running and helpless run and pass defending against Ole Miss and netting zero turnovers both games.

Much to mend with another dual threat quarterback, Auburn’s Bo Nix, ready to run Saturday at Reynolds Razorback Stadium.

“We have rules of our defense, and there’s always a quarterback player and a running back player,” Arkansas senior linebacker Hayden Henry said. “There’s supposed to be someone there to make the play. On certain plays that play wasn’t being made. We just have to make those corrections and get better for next week.”