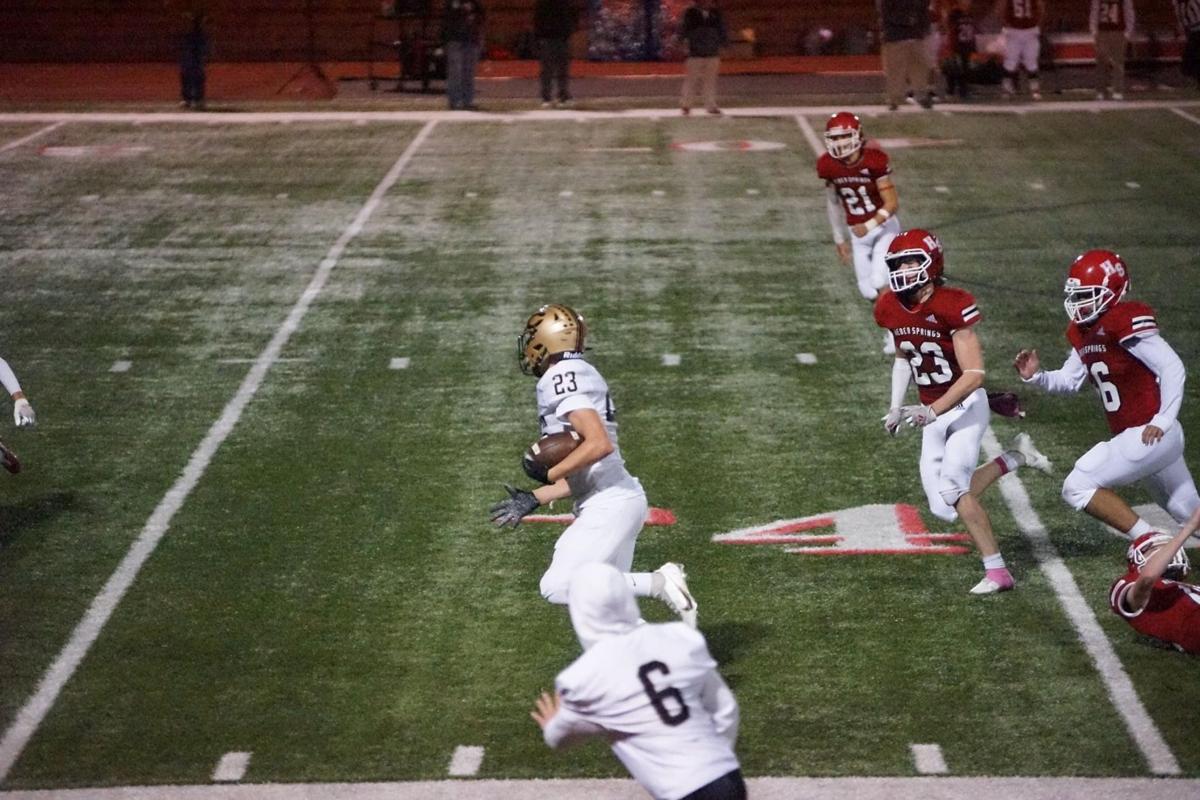 Yellojackets go on a long run against the Panthers. 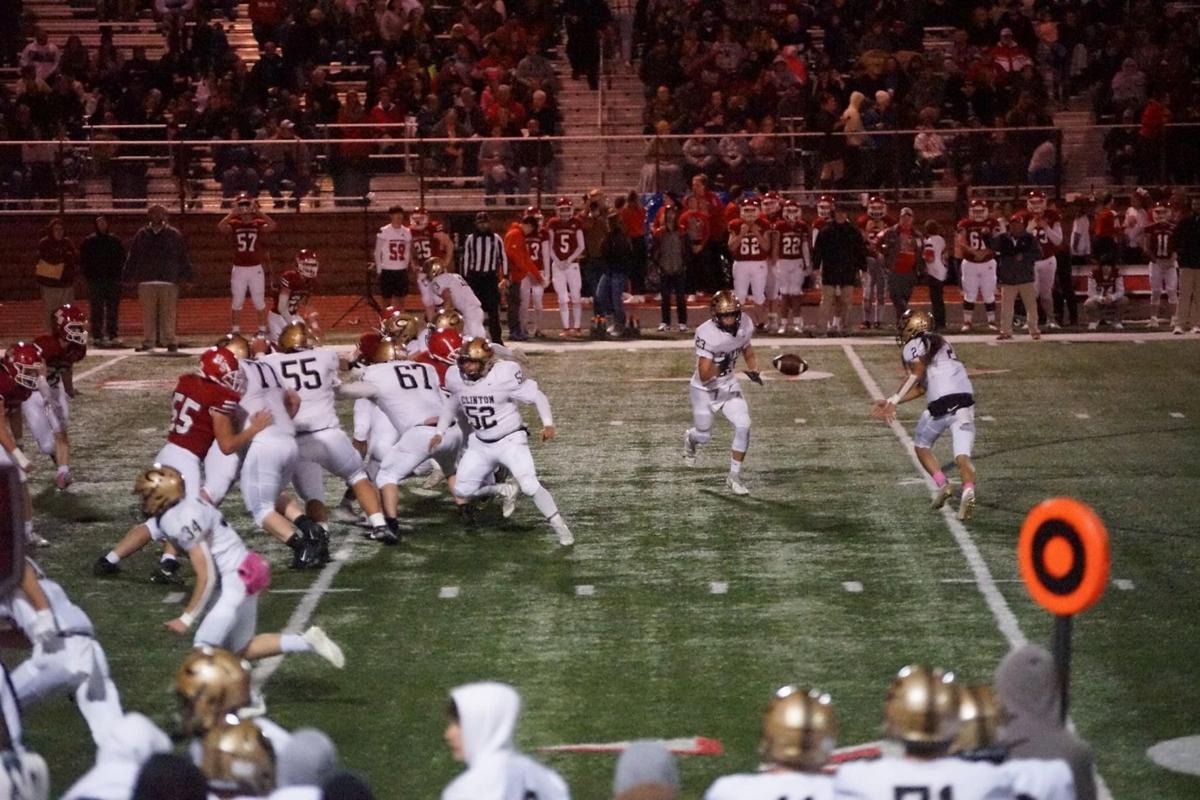 A Yellowjacket player pitches the ball as Panthers try to break through.

Yellojackets go on a long run against the Panthers.

A Yellowjacket player pitches the ball as Panthers try to break through.

Friday night at Panther Stadium in Heber Springs the Clinton Yellowjackets scored on their first two possessions of the game and never looked back in a dominating 34-7 win over Heber in the sixth installment of the “Battle of the Little Red.” The Yellowjacket defense was swarming all night holding the Panthers to a single touchdown and only allowing Heber Springs to convert three of twelve 3rd downs on the night. Clinton also dominated the time of possession holding the ball for 33 of the games 48 minutes. The 27-point win was the Yellowjackets largest over the Panthers since the Jackets 33-6 win over Heber in 2005. The win clinched a spot in the playoffs for the sixth straight season extending a school record for consecutive playoff appearances.

The 85th meeting between these two old rivals was played on a cool evening with the temperatures dipping into the low 50s and winds with gusts up to 22 miles per hour coming out of the north. Clinton recovered an on-side kick by Heber Springs on the opening kick at its own 47-yard line. The Yellowjackets quickly covered the 53-yards in just two minutes with a Zane Widner run setting up a Harley Tobin quarterback sneak for the touchdown. The 2-point conversion was no good. The Jackets defense stopped Heber Springs on downs at the Clinton 36-yard line. The Jackets drove to the Panthers 7-yard line where they faced 4th down with only 21-seconds left in the 1st quarter. Tobin rolled right and hit Brody Emberton in the corner of the endzone for a touchdown. The 2-point conversion was no good leaving the score Clinton 12 Heber Springs 0.

Both teams failed to score on their first possessions of the second quarter until Heber Springs began a drive at their own 24-yard line. The Panthers drove 76-yard yards with Sophomore Parker Brown scoring on a 33-yard run for a touchdown and the extra point cut the Clinton lead to 12-7. The touchdown would turn out to be the only score of the night for Heber. Clinton returned the kickoff up to the 35-yard line. Moving the ball primarily on the ground the Yellowjackets moved the ball down to the 20-yard line. Senior Nick Epley than covered the final 20-yards on a spectacular zig zagging run. The 2-point conversion was no good and the Jackets held an 18-7 lead with 1:59 left in the half. Each team would exchange interceptions to end the half.

The first play of the third quarter would prove to be one of the biggest plays of the game. Heber Springs got the ball to start the second half and set up shop at their own 32-yard line. A misplay on the handoff created a fumble that Clinton senior Ashton Hoyle recovered giving the Yellowjackets the ball and great field position at the Heber 26-yard line. The Jackets quickly took advantage of the miscue scoring on an 8-yard run by Widner and Clinton converted its first 2-point conversion of the night on a pitch from Tobin to Epley increasing the Yellowjackets lead top 26-7 with only two minutes gone in the third quarter. After the Jacket defense stopped the next two Heber possessions one on downs and the other on an interception by Emberton the Jackets began their final scoring drive of the night at the 49-yard line. Clinton drove the 51-yards with some big runs by senior Cody Davis. Davis would also score the touchdown on a 2-yard run. Epley added the 2-point conversion to what would be the eventual final score 34-7 with 44 seconds left in the third quarter. The Clinton defense would shutout Heber Springs in the fourth quarter with Davis picking up the third interception of the game for the Yellowjackets.

Clinton had 324-yards of total offense with 290 coming on the ground. Widner led the Yellowjackets in rushing with another 100-yard game as he had 114-yards on 12 carries averaging 9.5 yards per carry. Davis added 66-yards on 14 carries while Epley chipped in 57-yards on 10 carries. Tobin was 5-9 passing for 39-yards on a very windy night. The Clinton defense held Heber Springs to only 215-yards and seven points and forced four Panther turnovers. Landon Rose led the Yellowjackets in tackles with 5.5 including a sack

The win improves Clintons record 5-4 on the season and 4-2 in Conference 2-4A play. Heber Springs is now 3-5 on the season and 2-4 in conference play. The win now makes the all-time series Clinton 42 wins Heber Springs 38 wins and there have been five ties. The series dates back to 1939. In games played at Heber Springs Clinton leads now with 21 wins to 19 for Heber and there has been one tie. The six straight wins by Clinton over the Panthers ties the longest streak in the series by Clinton. The Jackets have won six in a row on two other occasions over Heber Springs. The first from 1945 to 1949 and the second was from 2000 to 2005. Friday night the Yellowjackets will play their final regular season home game of the year when they take on the Lonoke Jackrabbits at Jim Tumlison Field. A win by the Jackets would move them into third place in the conference and would give the Yellowjackets a home game in the first round of the playoffs. The Clinton football seniors as well as all Fall sports and spirit squad seniors will be honored before the game beginning at 6:30 p.m. The game can also be seen and heard on the Yellowjacket Sports Network KHPQ 92.1 as will KHPQ Facebook and YouTube.